Our premium wines for September are Bonterra Wines from Mendocino, California. The red is their Organic Zinfandel. The white is their Organic Chardonnay. Both are $8.95/glass and $24.95/half litre. Our guest tap is currently pouring an unfiltered and hoppy American style wheat beer called Wheat Burst from Black Bridge Brewery in Swift Current. Next up is a specially imported keg of Hofbräu München Schwarze Weisse (dark wheat beer) from Germany for our Bushwakker Oktoberfest Week. Following that we have a limited release offering from the Prairie Sun Brewery in Saskatoon. Their Saison du Miel et Vin is a local wild flower honey-infused Saison refermented with champagne yeast and aged in a wine barrel. Bushwakker Brewpub’s New Writer’s Corner Seeks Books! We are creating a Writer’s Corner and are seeking donations of recent publications (2014-2016 publication dates) from Regina and area authors (all genres) to help create a library within the Writer’s Corner. The goal is to start slowly and gradually increase the size of the library a couple of times each year. More book shelves will be installed as the number of books increases. The books in the corner library will be available for patrons interested in reading works by local authors and the books will remain in the brewpub. To be considered for the library, books must be a minimum of 40 pages and professionally bound. Please drop off a copy of your recently published book (along with purchasing information which can be shared with brewpub patrons) to Grant Frew at Bushwakker. You can email Grant at bar@bushwakker.com. Books will remain a part of the Bushwakker library. Rotating individual author biographies and a brief book synopsis will be featured in the brewpub’s weekly newsletter and social media channels on a regular basis. The Bushwakker is now OPEN ON SUNDAYS from Noon to Nine. Enjoy our Sunday Steak & a Pint feature. Big Beer News! Bushwakker Dungarvon Irish Red Ale is now available for growler fills at the Quance Street SLGA store. The response has been very positive and our beer is selling very well. Three other Saskatchewan brewed beers are also available. Be sure to support this SLGA pilot program and help grow Saskatchewan craft beer. If successful, more SLGA stores may also offer growler fills in the future!

Sept. 24: SASK VS. HAMILTON. Kick-off is at 7:30. Be sure to join the Sea of Green before and after the game and enjoy our Tabby Burger & a Pint special. Come “devour” the competition! Sept. 26 – Oct. 1: Bushwakker Oktoberfest Week. The official Oktoberfest celebration in Munich will be winding down as the Bushwakker weeklong Oktoberfest celebration begins. Enjoy a unique German-themed meal special every day of the week as well as a pint of our Bushwakker brewed Oktoberfest lager, Harvest Lager. A selection of German bottled beers and a specially imported keg of Hofbräu München Schwarze Weisse (dark wheat beer) draught will also be available. Prosit! Sept. 26: Monday Night Jazz & Blues. CALL ME MILDY. Cool rockin’ blues, southern rock, tex-mex, & reggae-tinged tunes with jumpin’ harmonica. 8:00 PM. Sept. 28: Wednesday Night Folk. THE STILLHOUSE POETS. Prairie gothic roots duo sing about blood & dusty bibles, black crows and barbed wire. 9:00 PM. Oct. 3: Monday Night Jazz & Blues. WHITEBOY SLIM CD RELEASE PARTY. A big night for this national award-winning Blues artist from Moose Jaw, Saskatchewan releasing his seventh CD to date! This one is titled, “Diversity.” Four of the featured tracks were recorded live at The Bushwakker! 8:00 PM. Oct. 5: Wednesday Night Folk. THE MOOSE JAVIANS. Cowboy poetry and songs from Ken Mitchell, Slim Mitchell, and Johnny Twofingers. 9:00 PM. Oct. 5: MONTHLY ALES MEETING. A brewing season is underway! If you are interested in getting into the art of home brewing or would like to improve your skills, come to the Bushwakker downstairs clubroom at 8:00 PM and discover what the ALES Club can offer you. This month’s meeting topics include; Brew in a Bag and Build Your First All Grain Brew. Oct. 6: BLACK FOX SPIRITS TASTING EVENT. Experience six unique products from Saskatchewan’s first on-farm distillery producing small batch spirits and liqueurs from their farm-grown grains and fruits. Distillery founders, Barb and John Cote, will share their story and some of their very rare offerings. 7:00 PM in the Bushwakker Arizona Room. Tickets only $20 each. Only 50 tickets available. 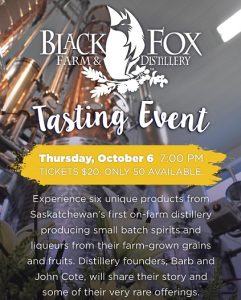 The Story of Yeast: Domesticated Tipple

In a piece of genetic archaeology, researchers discover the origins of a good pint. Cattle ranchers know that if they want to increase their yields it is best to breed their largest cows with their biggest bulls. The same idea works when trying to improve other livestock, crops and pets. Although less well known, microorganisms can also be bred selectively. Given that yeasts have a long history of being used to ferment food and drink, archaeologists have argued for years that early craftsmen may have selectively bred yeast strains without even realizing it. Now there is evidence to support this idea. Steven Maere of the University of Ghent and Kevin Verstrepen of the University of Leuven, both in Belgium, and their colleagues have been studying the genomes of culinary yeast species. As they report in Cell this week, the researchers have found evidence that people started domesticating yeast strains, particularly those used in beer, some 500 years ago. Today’s bakers, vintners and brewers have intimate knowledge of yeasts and choose strains that improve their products and grant specific flavours. But until the work of Louis Pasteur in the mid-19th century nobody knew that microorganisms existed. However, a process called “backslopping”, whereby part of an old successful mix of fermented dough, wine or beer is seeded into a new mix, might have allowed early yeast users to confine species that had favourable characteristics in man-made environments for years on end, effectively domesticating them. Drs Maere and Verstrepen suspected that regular backslopping would have resulted in yeasts developing traits that led them to thrive in environments managed by humans, but to struggle in the wild. To explore that idea, they set up an experiment. Working with a team of experts from White Labs, a company in San Diego that develops and sells yeasts, the researchers analysed the genomes of 157 strains of Saccharomyces cerevisiae, a yeast species that is commonly used today. Most were beer strains but the team included a number of wine, spirit, sake and bread yeasts for comparison. They knew from past studies that it was common for organisms exposed to artificial selection to carry evidence of such tinkering in the form of duplicate chromosomes and genes. And, sure enough, they found these characteristics in abundance and noticed that all the strains seemed to stem from wild ancestors that lived 500 years ago. Further support came from traits carried by their genes. All yeasts engage in asexual reproduction most of the time. But wild species are capable of mating when genetic diversity in a population declines. Such a trait can prevent populations from becoming homogenous and thus vulnerable to a single disease or predator, but it serves no purpose in populations living in stable, protected man-made environments and ought thus to fade away. This is precisely what the researchers found. More than 40% of the beer yeasts were found to be incapable of reproducing sexually, and the others showed dramatically reduced sexual fertility. Although domestication led sexual reproduction to decay, traits useful for life in a brewery became more common. The researchers found that genes involved in the fermentation of maltose, the main sugar found in beer, were duplicated several times, allowing beer yeasts to complete the fermentation process more rapidly than their feral ancestors. Similarly, wild yeasts typically carry genes associated with a range of unpleasant flavours; and these genes were rare in the culinary ones. Intriguingly, all these signs of domestication were far stronger in the 102 brewing strains that the researchers studied than those in the wine strains. The evidence suggests that yeast domestication began in the 1500s and was more pronounced in brewing than it was in winemaking. Drs Maere and Verstrepen suggest that this may be down to different practices. Brewing yeasts were likely to breed continuously in a man-made environment, since they are recycled after each fermentation batch and beer is produced all year. In contrast, wine yeasts are only grown for a short period every year, and spend much of their lives in and around vineyards where they are subject to intermingling with wild strains, so are subjected to natural selective pressures. The work was more than an academic exercise. The researchers went on to select a strain of beer yeast that shows very efficient fermentation, but also produces an unwanted spicy flavour, and crossed it with a less efficient but better-smelling sake strain. By selecting progeny without the gene variants for the off-flavour, they obtained a new beer yeast that combines swift fermentation with a lovely, fruity aroma. And this could be just the beginning. The scientists expect a range of novel yeast hybrids to follow from their research. 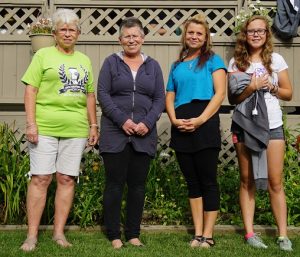 Your Bushwakker has become a Regina icon for several reasons, one of which is that it is a successful local family business. Our readers may then find that the photo above shows an interesting aspect of the aforementioned family. Starting on the left is the Bushwakker original General Manager, Elaine Robertson. Next is Elaine’s daughter Kelly Monette, current General Manager and wife of Executive Chef Mike Monette. Next is Kelly’s daughter Amy Bird, and next to Amy is her daughter Makayla Bird. What we think you might find interesting is that all four are very close to the same height in spite of representing four generations and Great Granma looks younger and fitter than most 50-year olds.  Amy is not a Bushwakker employee, but her sister Kristen Welisch is the Office Manager and her brother Michael Gaetz is Bushwakker head brewer. Neither has a daughter as tall as Makayla, yet.