Our premium wines for September are Bonterra Wines from Mendocino, California. The red is their Organic Zinfandel. The white is their Organic Chardonnay. Both are $8.95/glass and $24.95/half litre. Our guest tap is currently pouring an unfiltered and hoppy American style wheat beer called Wheat Burst from Black Bridge Brewery in Swift Current. Next up is a limited release offering from the Prairie Sun Brewery in Saskatoon. Their Saison du Miel et Vin is a local wild flower honey-infused Saison refermented with champagne yeast and aged in a wine barrel. Last call for Bushwakker beer at The MacKenzie Art Gallery! We’ve had a great summer working with the good folks at Regina’s MacKenzie Art Gallery but this particular party will be coming to an end with a show on Thursday and Friday. The Candahar is one of their most interactive installations to date. Created by Winnipeg-based artist, Theo Sims, this replica of a Belfast pub complete with Bushwakker beer on tap will whisk you away from the queen city to 1990's Ireland. On Thursday, September 22nd the Candahar will be open and art gallery staff will feature tours of current exhibitions. On Friday, September 23 the final celebrity guest bartender will be Rebecca Belmore.  Pints at the Candahar will be flowing between 6:00 PM and 9:00 PM both nights.    http://mackenzieartgallery.ca/engage/exhibitions/theo-sims-the-candahar The Bushwakker is now OPEN ON SUNDAYS from Noon to Nine. Enjoy our Sunday Steak & a Pint feature. Big Beer News! Bushwakker Dungarvon Irish Red Ale is now available for growler fills at the Quance Street SLGA store. The response has been very positive and our beer is selling very well. Three other Saskatchewan brewed beers are also available. Be sure to support this SLGA pilot program and help grow Saskatchewan craft beer. If successful, more SLGA stores may also offer growler fills in the future! 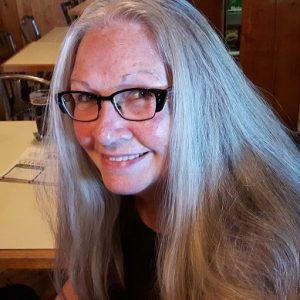 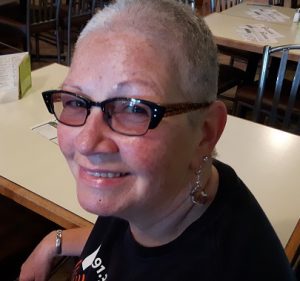 Congratulations to Bushwakker floor manager, Cheryl Tovey! Over 200 people attended her Head Shave fundraising event for Ovarian Cancer research on Sept. 8. Her goal was to raise $10,000. With your generous and enthusiastic support, she raised nearly $18,000. You can view her head shave video by visiting https://youtu.be/7zMkTq3kufI

Sept. 18: SASK. VS. EDMONTON. OPEN AT 11:00 AM. We are now open every Sunday and we welcome the Sea of Green prior to the 2:30 kick-off as well as for a post-game celebratory pint.  Enjoy our gourmet Edmonton Burger & a Pint special and “devour” the competition! Sept. 19: Monday Night Jazz & Blues. THE JAZZ BAND-ITS. Enjoy big band, jazz and swing from the largest band to ever grace the Bushwakker stage. 8:00 PM. Sept. 21: Wednesday Night Folk. KINDER SCOUT. Alternative rock roots blues group makes their Bushwakker debut. Opening act: KATIE MILLER. 9:00 PM. Sept. 22: SCIENCE PUB – edition #34: Where Did he Come From? Trump at the Limits of Explanation! Our wildly popular Science Pub Series returns for a fifth incredible season! Enjoy lectures on scientific topics of general interest in our Arizona Room (main floor banquet room) over beer and snacks. The room opens at 5:00 PM and quite often is full by 6:00 PM. Avoid disappointment and come down early for dinner and a pint before the presentation which begins at 7:00 PM. This month's lecture will be presented by Jim Farney, Associate Professor in Politics and International Studies at The University of Regina. This should be a well-attended lecture! How are we to understand the rise of Donald Trump? And could we have predicted it? This talk will answer these questions by presenting some of the frameworks political scientists have developed to understand American electoral politics, put Trump's candidacy in the context of those theories, and ask what Trump's campaign means for our ability to predict and explain politics. Sept. 24: SASK VS. HAMILTON. Kick-off is at 7:30. Be sure to join the Sea of Green before and after the game and enjoy our Tabby Burger & a Pint special. Come “devour” the competition! Sept. 26 – Oct. 1: Bushwakker Oktoberfest Week. The official Oktoberfest celebration in Munich will be winding down as the Bushwakker weeklong Oktoberfest celebration begins. Enjoy a unique German-themed meal special every day of the week as well as a pint of our Bushwakker brewed Oktoberfest lager, Harvest Lager. A selection of German bottled beers and a specially imported keg of Hofbräu München Schwarze Weisse (dark wheat beer) draught will also be available. Prosit! Sept. 26: Monday Night Jazz & Blues. CALL ME MILDY. Cool rockin’ blues, southern rock, tex-mex, & reggae-tinged tunes with jumpin’ harmonica. 8:00 PM. Sept. 28: Wednesday Night Folk. THE STILLHOUSE POETS. Prairie gothic roots duo sing about blood & dusty bibles, black crows and barbed wire. 9:00 PM. Oct. 3: Monday Night Jazz & Blues. WHITEBOY SLIM CD RELEASE PARTY. A big night for this national award-winning Blues artist from Moose Jaw, Saskatchewan releasing his seventh CD to date! This one is titled, “Diversity.” Five of the featured tracks were recorded live at The Bushwakker! 8:00 PM. Oct. 5: Wednesday Night Folk. THE MOOSE JAVIANS. Cowboy poetry and songs from Ken Mitchell, Slim Mitchell, and Johnny Twofingers. 9:00 PM. Oct. 6: BLACK FOX SPIRITS TASTING EVENT. Experience six unique products from Saskatchewan`s first on-farm distillery producing small batch spirits and liqueurs from their farm-grown grains and fruits. Distillery founders, Barb and John Cote, will share their story and some of their very rare offerings. 7:00 PM in the Bushwakker Arizona Room. Tickets only $20 each. Only 50 tickets available.

Why You Can't Order a Guinness at These Hotel Bars 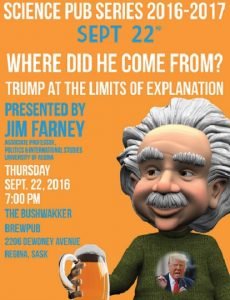 So ironic - you offer someone a sincere compliment on their moustache and suddenly she's not your friend anymore! A teenager brings her new boyfriend home to meet her parents. They are appalled by his haircut, his tattoos, his piercings. Later, the girl's mom says "Dear, he doesn't seem to be a very nice boy". "Oh, please, mom!" says the daughter. "If he wasn't nice, would he be doing 500 hours of community service?"