Our premium wines for September are Bonterra Wines from Mendocino, California. The red is their Organic Zinfandel. The white is their Organic Chardonnay. Both are $8.95/glass and $24.95/half litre. Our guest tap is currently pouring Puddle Jumper Rhubarb Cider from Living Sky Winery in Perdue, Saskatchewan. $7.95 for a half pint.  Next up we have the unfiltered and hoppy Wheat Burst from Black Bridge Brewery in Swift Current. Big Beer News! Bushwakker Dungarvon Irish Red Ale is now available for growler fills at the Quance Street SLGA store. Three other Saskatchewan brewed beers are also available. Enjoy Bushwakker beer on tap every Thursday night at The MacKenzie Art Gallery this summer! The Candahar is one of their most interactive installations to date. Created by Winnipeg-based artist, Theo Sims, this replica of a Belfast pub complete with Bushwakker beer on tap will whisk you away from the queen city to 1990's Ireland. This week's local celebrity guest bartender on September 8th will be Anthony Kiendl. http://mackenzieartgallery.ca/engage/exhibitions/theo-sims-the-candahar The Bushwakker is now OPEN ON SUNDAYS from Noon to Nine. Enjoy our Sunday Steak & a Pint feature. Several fellow Maritimers have pointed out that a third explanation for the source of the whoop of the Dungarvon Whooper circulates in New Brunswick. That story involves the ghost of a young cook who met an untimely demise. I have also heard that explanation but I don’t believe that ghosts exist so I have preferred the Puma explanation, leaving the anti-social hermit as a less plausible second alternative. Bev Robertson Congratulations to Christine Sutherland from Val Marie, SK. She was the winner of our Blackberry Mead Package Draw which we held at the Motherwell Homestead last weekend. We are already making preparations for this year’s annual Blackberry Mead Release Day which will be Saturday, December 3rd. 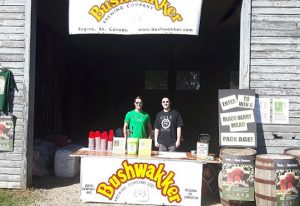 Sept. 2: FIRST FIRKIN FRIDAY. Enjoy this longstanding tradition! A small keg of special beer is paraded throughout the pub lead by a piper from The Regina Police Services Pipes & Drums. A volunteer firkin tapper is selected to tap the cask and quite often receives a beer bath! Don’t miss what new Bushwakker head brewer, Michael Gaetz, has created this month -a Lumsden Valley honey and Swedish orange vodka -infused Blood Orange Blonde Ale. Sept. 2, 3 & 4: LABOUR DAY LONG WEEKEND EVENT. Receive free ice, cups, coasters and the loan of a keg chiller tub with the purchase of any one of our four sizes of Bushwakker kegs. Be sure to celebrate the final summer long weekend of 2016 with family, friends and a Bushwakker keg! Sept. 3, 4 & 5: LABOUR DAY CLASSIC THREE-DAY BURGER BATTLE. We welcome our many Manitoba friends who make their annual pilgrimage to the Bushwakker and Mosaic stadium. This is also the only weekend of the year where you can choose from either our Winnipeg Burger & a Pintfeature or our Saskatchewan Burger & a Pint feature. History has shown that the burger which sells the best prior to the game is a strong indicator as to which team will win the Labour Day Classic! We open at 11:00 AM on all three days. Sept. 4: THE LABOUR DAY CLASSIC. Can Team Green produce a 12th consecutive Labour Day Classic win? Join the Sea of Green at the Bushwakker at 11:00 AM for our Saskatchewan Burger & a Pint or a Winnipeg Burger & a Pint feature and to discuss the probable outcome before the 1:00 PM kick-off. Meet “Back at the Bush” to conduct your post-game analysis. Sept. 5: LABOUR DAY - OPEN AT 11:00 AM. Sept. 5: Monday Night Jazz & Blues. ‘ROUND MIDNIGHT. Popular act plays popular jazz and popular adult contemporary tunes. 8:00 PM. Sept. 7: Wednesday Night Folk. BEN WINOSKI & JEFF STORRY. Talented acoustic guitar duo demonstrates power, speed and finesse. 9:00 PM. Sept. 7: ALES CLUB MONTHLY MEETING. After a two month summer break, one of North America’s top ranked home brewing clubs is set to reconvene for another brewing season. The September meeting is historically the largest meeting of the year. If you are interested in getting into the art of home brewing or would like to improve your skills, come to the Bushwakker basement clubroom at 8:00 PM and discover what the ALES Club can offer you. This month’s meeting topics include; How To Taste & Analyze Your Beer and an Introduction To All-Grain Brewing. Sept. 8: CHERYL’S HEAD SHAVE OVARIAN CANCER BEER & BURGER NIGHT. If Bushwakker floor manager, Cheryl Tovey, raises $10,000 by September 8 she will shave her head in the middle of Bushwakker! You can help her reach her goal in two ways; visit the Ovarian Cancer Walk of Hopewebsite and donate to the Tovey Sister Sh*t Show Team or purchase a $30 ticket to Cheryl’s Head Shave Burger & Beer Night. Receive a Bushwakker burger, award-winning fries, Caesar salad and a half pint of any regular Bushwakker beer. Huge silent auction too! Tickets are on sale now at Bushwakker. 6:00 PM. Sept. 12: Monday Night Jazz & Blues. THE MINISTRY OF GROOVE. Popular act plays 1970’s jazz funk and beyond! 8:00 PM. Sept. 14: Wednesday Night Folk. BILLARNEY.  Very large acoustic Celtic act returns. 9:00 PM. Sept. 18: SASK. VS. EDMONTON. We are now open every Sunday and we welcome the Sea of Green prior to the 2:30 kick-off as well as for a post-game celebratory pint.  Enjoy our gourmet Edmonton Burger & a Pint special and “devour” the competition! Sept. 19: Monday Night Jazz & Blues. THE JAZZ BAND-ITS. Enjoy big band, jazz and swing from the largest band to ever grace the Bushwakker stage. 8:00 PM. Sept. 21: Wednesday Night Folk. KINDER SCOUT. Alternative rock roots blues group makes their Bushwakker debut. Opening act: KATIE MILLER. 9:00 PM. Sept. 22: SCIENCE PUB – edition #34: Where Did he Come From? Trump at the Limits of Explanation! Our wildly popular Science Pub Series returns for a fifth incredible season! Enjoy lectures on scientific topics of general interest in our Arizona Room (main floor banquet room) over beer and snacks. The room opens at 5:00 PM and quite often is full by 6:00 PM. Avoid disappointment and come down early for dinner and a pint before the presentation which begins at 7:00 PM. This month's lecture will be presented by Jim Farney, Associate Professor in Politics and International Studies at The University of Regina. This should be a well-attended lecture! How are we to understand the rise of Donald Trump? And could we have predicted it? This talk will answer these questions by presenting some of the frameworks political scientists have developed to understand American electoral politics, put Trump's candidacy in the context of those theories, and ask what Trump's campaign means for our ability to predict and explain politics. Sept. 24: SASK VS. HAMILTON. Kick-off is at 7:30. Be sure to join the Sea of Green before and after the game and enjoy our Tabby Burger & a Pint special. Come “devour” the competition! Sept. 26: Monday Night Jazz & Blues. CALL ME MILDY. Cool rockin’ blues, southern rock, tex-mex, & reggae-tinged tunes with jumpin’ harmonica. 8:00 PM. Sept. 28: Wednesday Night Folk. THE STILLHOUSE POETS. Prairie gothic roots duo sing about blood & dusty bibles, black crows and barbed wire. 9:00 PM. 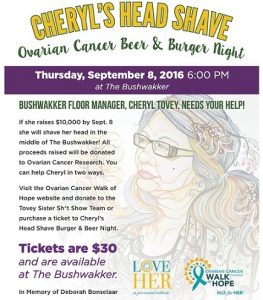 By Erin Petrow   August 27, 2016 As craft brewers from across Saskatchewan gather in Saskatoon for the YXE Beer Fest, the future of local brewers and their businesses remains in flux; craft beer production standards are under review by the Saskatchewan Liquor and Gaming Authority (SLGA.) Industry insiders have noted problems with the current legislation that deals with microbreweries, as well as changes to Alberta legislation that introduced a grant program to Alberta brewers. Premier Brad Wall has criticized the move, saying it would dramatically increase the price of Saskatchewan beer in Alberta stores. SLGA spokesman David Morris said both governments are working together to find a solution to the problem, but it may not come soon enough. “Our prices on the shelf are going way up,” said Kari Stenson, president of the Saskatchewan Craft Beer Association (SCBA) and owner of Black Bridge Brewery of Swift Current. “We are thinking about pulling out of Alberta because of it.” Even if Saskatchewan brewers are able to remain in the Alberta market, they still face problems on this side of the border, which they hope will be addressed in the review. The results were previously set to be released in the spring, but have yet to be issued. Morris said the province expects to announce it in the fall. “We can’t move forward with our plans until the rules are set in stone,” Stenson said. The main problem with the current craft brewing system is the yearly brewing limit each producer is required to stay below to maintain the status, and tax bracket, of a microbrewer, she said. That limit is 5,000 hectolitres, or slightly less than 1.5 million standard size bottles. “A few Saskatchewan-based craft producers indicated to SLGA that they expected to exceed the maximum production thresholds, and that without a change to the threshold they may have to consider limiting production or ceasing sales of their products,” Morris said. Although Black Bridge Brewery is not currently hitting that limit, Stenson said she believes her business should be there in the next two years; unless the SLGA ups the limit to 20,000 hectolitres, she said it will be hard to maintain quality and production level without losing money. Through the SCBA, local brewers have been able to pool their resources to create a united vision on what craft brewing in Saskatchewan means, remaining hopeful that the open line of communication they share with the SLGA has helped them get their foot in the door to make the necessary changes. “It’s tricky to work through all the regulations on craft beer,” Stenson said. “We started out just wanting to make a beer we really enjoyed drinking.”

I was the only bloke in a pre-screening of Fifty Shades of Grey, but I could tell it was going to be a good film... the place was buzzing. Jake was dying. His wife sat at the bedside. He looked up and said weakly "I have something I must confess". "There's no need to "his wife replied. "No" he insisted "I want to die in peace. I slept with your sister, your best friend, her best friend, and your mother!" "I know" she replied. "Now just rest and let the poison work". The husband was not home at his usual hour, and the wife was fuming, as the clock ticked later and later. Finally, about 3am she heard a noise at the front door, and as she stood at the top of the stairs, there was her husband, drunk as a skunk, trying to navigate the stairs. "Do you realise what time it is!?" she said. He answered "Don't get excited, I'm late because I bought something for the house". Immediately her attitude changed and as she ran down the stairs to meet him halfway, she said "What did you buy for the house, dear?" His answer was "A round of drinks!"