Our premium wines for August are Middle Sister Wines from California. The red is their Mischief Maker Cabernet Sauvignon, the white is their Drama Queen Pinot Grigio. Both are $8.50/glass and $23.95/half litre. Our guest tap is currently pouring Hopping Bunny Hugger Cherry Cider from Living Sky Winery in Perdue, Saskatchewan. $7.95 for a half pint. Our cider celebration will then continue with the Living Sky Puddle Jumper Rhubarb cider! Enjoy Bushwakker beer on tap every Thursday night at The MacKenzie Art Gallery this summer! The Candahar is one of their most interactive installations to date. Created by Winnipeg-based artist, Theo Sims, this replica of a Belfast pub complete with Bushwakker beer on tap will whisk you away from the queen city to 1990's Ireland. This week's local celebrity guest bartenders on August 25th will be a group from Chicken and Wine. http://mackenzieartgallery.ca/engage/exhibitions/theo-sims-the-candahar The Bushwakker is now OPEN ON SUNDAYS from Noon to Nine. Enjoy our Sunday Steak & a Pint feature. We are seeing lots of folks coming in for offsale and growler fills with smiles on their faces! We now have tickets available to the Regina Symphony Orchestra’s Symphony Under The Sky event which takes place on Saturday, August 27th at the Motherwell Homestead national historic site. The Bushwakker will be there pouring our Motherwell Red Fife Witbier. Tickets $15 each. 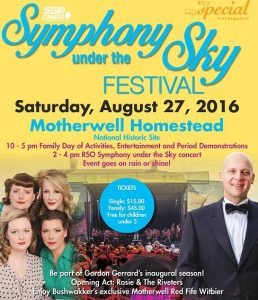 We tap a firkin of Motherwell Red Fife Witbier on Friday, August 19 and will be serving it on tap at the Symphony Under The Sky event on Saturday, August 27th!   Bushwakker floor manager, Cheryl Tovey, needs your help! If she raises $10,000 by September 8th she will SHAVE HER HEAD IN THE MIDDLE OF THE BUSHWAKKER! All proceeds raised will be donated to Ovarian Cancer Research. You can help Cheryl in two ways. Visit the Ovarian Cancer Walk of Hope website and donate to The Tovey Sisters Sh*t Show Team or purchase a ticket to Cheryl’s Head Shave Burger & Beer Night. Tickets are $30 and are available at The Bushwakker.

Aug. 19: MOTHERWELL RED FIFE WITBIER FIRKIN PREVIEW. The Bushwakker is a proud partner of Parks Canada this summer and has been asked to once again brew our extremely popular Motherwell Homestead commemorative brew, as part of Parks Canada’s 2016 celebrations. Motherwell Red Fife Witbier, utilizes the historic unmalted Red Fife wheat in its production. This special Belgian-style wheat beer will be officially released at The Symphony Under The Sky event which will be held at the Motherwell Homestead on Saturday, August 27. Motherwell Homestead interpreters will be at the Bushwakker for a special Firkin Preview tapping of this refreshing commissioned brew on August 19 at 5:30. They will be wearing period dress and will briefly describe the big Motherwell Threshing Day/SUTS Grand Event. Don’t miss this opportunity to have an advance taste of this historic brew before it is officially unveiled later. Aug. 22: Monday Night Jazz & Blues. THE JEFF MERTICK BAND. Soulful blues vocals from this veteran blues act. 8:00 PM. Aug. 24: Wednesday Night Folk. THE RYAN HICKS TRIO. Pop/folk/rock from this talented veteran Regina singer/songwriter. 9:00 PM. Aug. 27: Bushwakker Motherwell Red Fife Official Release at the Motherwell Homestead. Aug. 29: Monday Night Jazz & Blues. WHITEBOY SLIM.  A return engagement from the national award-winning blues act. 8:00 PM. Aug. 31: Wednesday Night Folk. BRADFORD. Talented vocal/acoustic guitar duo featuring Mark Radford and Brad Papp. 9:00 PM.

By: Lindsay Patton  In the past 20 years the way we consume beer has changed drastically. The craft beer market has exploded to the point where beer giants like Anheuser-Busch have felt threatened, forcing the company to start buying craft brewers like Chicago’s Goose Island. While beer culture is evolving rapidly as a result, one aspect of the culture that is not moving is the boys’ club mentality. Funnily enough though, women have a rich history in beer. In ancient Egypt women were the ones who made and sold beer. The same with the United States when it was first colonized. While in the past few years men’s consumption of beer has dropped, women’s beer consumption is growing and women have gone from making up 20 percent of craft brew’s consumers to 32 percent. There is a huge opportunity for beer to acknowledge and include women in its culture, especially if breweries want to cater to a growing demographic. Unfortunately, there are still a few things that are preventing women from becoming completely accepted in the beer world. The Advertising In beer advertising it’s men drinking the beer while busty, scantily clad women stand by as props. Ever been to a bar where there was a female beer representative for a major beer company? She’s made up, flirty and wearing tight clothing. Large beer companies look at women not as consumers but as advertising items that can help close the deal with their larger demographic (men) while ignoring their growing demographic (women). The Beer Names and Labels What sets craft beer apart is its creativity and edginess. But many times, “edginess” has meant sexist and racist names and labels. Women are featured on labels in clothing and positioning that caters to the male gaze. A repeat offender is Flying Dog Brewery, which has named its beer “Raging Bitch” and “Pearl Necklace.” In 2009, Michigan Liquor Control Commission basically told Raging Bitch to GTFO, which led to a years-long lawsuit. Eventually, and citing freedom of speech, The United States Court of Appeals ruled in favor of Flying Dog. The Industry In 2013, out of the 154 brewing locations in Colorado, there were only 10 women who were part of the main brewing process. But there are women brewers out there and they are growing in number. There are even organizations that are helping to change the number of female beer professionals and drinkers. Barley’s Angels and The Pink Boots Society are two that encourage women into the beer scene, whether it’s as drinkers or as women in the industry. The “Solution” High Heel Brewing is a good idea on paper: a women run and owned brewery. The problem is it completely caters to female stereotypes (just look at the name). Women don’t want beer that’s just for them, they want to be welcomed into beer culture and not be separated from it. Women don’t need girly packaging with pink labels and cursive fonts. They want to be part of a culture where they feel comfortable, and where the beverage they’re drinking doesn’t have a misogynistic label or name. Women – like men – just want to drink a good beer.

Entertainer Ronnie Corbett, best known for The Two Ronnies, passed away earlier this year. Here are some of his best jokes: A cement mixer collided with a prison van on the Kingston by-pass. Motorists are asked to be on the look-out for 16 hardened criminals. We will be talking to an out of work contortionist who says he can no longer make ends meet. We've just heard that in the English Channel, a ship carrying red paint has collided with a ship carrying purple paint. It is believed that both crews have been marooned. All those who believe in psychokinesis raise my right hand. It was revealed in a government survey published today that the prime minister is doing the work of two men, Laurel and Hardy. We'll be talking to a car designer who's crossed a Toyota with Quasimodo and come up with the Hatchback of Notre Dame. After a series of crimes in the Glasgow area, Chief Inspector McTavish has announced that he is looking for a man with one eye. If he doesn't find him, he's going to use both eyes. A grandfather has gone missing after eating four cans of baked beans, two cauliflowers and a jar of gherkins. His family have made an emotional appeal for him not to come home for at least a fortnight. Today is our anniversary. It's just 12 years ago today when she said "I do". It certainly surprised me, because I didn't think she did. That was the night when I leapt onto the dance floor and did my rather racy impression of John Travolta. I suppose it must have been the animal in me. Well, I had a ferret down my trousers. I remember that day clearly, because it was the one day there wasn't a sale at Allied Carpets. Offers of work have been flooding in. Last week I was invited to go on a round-the-world cruise. By the chairman of the Flat Earth Society. This week I was asked to do a very important after-dinner speech. I said: "Do you want me to be funny?" They said: "No, just be yourself."

What Is Courage To A Man?

Is it to fight a bull without a weapon? Is it to fly a fighter plane in combat? Is it to practice free fall parachuting? Is it bungee jumping, white water rafting? You need to know, those events are nothing! THIS, my friend, is COURAGE!!! 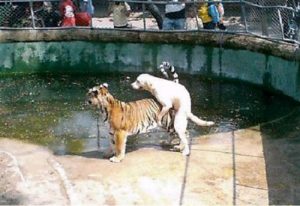 Plus, it's the last photo I have of my dog.