Our premium wines for August are Middle Sister Wines from California. The red is their Mischief Maker Cabernet Sauvignon, the white is their Drama Queen Pinot Grigio. Both are $8.50/glass and $23.95/half litre. Our guest tap is currently pouring a kettle sour from Nokomis Craft Ales in Nokomis, Saskatchewan: $7.95 for a pint. Next up is Hopped Bunny Hugger Cherry Cider from Living Sky Winery in Perdue, Saskatchewan: $7.95 for a half pint. Enjoy Bushwakker beer on tap every Thursday night at The MacKenzie Art Gallery this summer! The Candahar is one of their most interactive installations to date. Created by Winnipeg-based artist, Theo Sims, this replica of a Belfast pub complete with Bushwakker beer on tap will whisk you away from the queen city to 1990's Ireland. This week's local celebrity guest bartender on August 18th will be Taron Cochrane. http://mackenzieartgallery.ca/engage/exhibitions/theo-sims-the-candahar The Bushwakker is now OPEN ON SUNDAYS from Noon to Nine. Enjoy our Sunday Steak & a Pint feature. We are seeing lots of folks coming in for offsale and growler fills with smiles on their faces! We now have tickets available to the Regina Symphony Orchestra’s Symphony Under The Sky event which takes place on Saturday, August 27th at the Motherwell Homestead national historic site. The Bushwakker will be there pouring our Motherwell Red Fife Witbier. Tickets $15 each. The Bushwakker Local Arts Wall for the month of August features the works of Addy Maldonado. Her artist autobio follows:
I  grew up in Veracruz México and now I reside in Regina. I'm a self-taught artist who has always had a passion for the visual arts and painting. It wasn't until early 2012 that I created my first paintings. In my work I express my feelings for all that I love, my dreams and my most beloved memories. My Mexican heritage strongly influences my style and designs.
Enjoy Addy’s colourful work all this month! 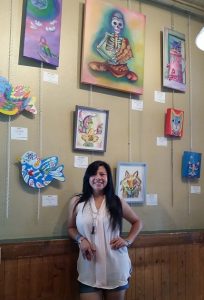 August Artist Addy Maldonado   Bushwakker floor manager, Cheryl Tovey, needs your help! If she raises $10,000 by September 8th she will SHAVE HER HEAD IN THE MIDDLE OF THE BUSHWAKKER! All proceeds raised will be donated to Ovarian Cancer Research. You can help Cheryl in two ways. Visit the Ovarian Cancer Walk of Hope website and donate to The Tovey Sisters Sh*t Show Team or purchase a ticket to Cheryl’s Head Shave Burger & Beer Night. Tickets are $30 and are available at The Bushwakker.

By Mary Ellen Shoup Craft beer represents roughly 10% of the total production of beer, which Bill Elkins, craft brewery account manager of western US and Canada for Hopsteiner, views as “tremendous potential.” Hopsteiner is a global grower and supplier of hops with operations in the US, UK, China, Czech Republic, Germany and Spain. In 2016, there were approximately 51,115 acres of hops in the US alone, most of which are located in the state of Washington. This figure does not account for the micro level of hops being grown in other states, but that too is growing, Elkins said. According to the Brewers Association, there were 4,225 craft breweries in the US in 2015 compared to 3,676 in 2014, an 18% increase. “We’ve had to work hard over the last four to five years to keep up with demand, but there are plenty of hops on the market for spot sales,” Elkins said. However, “there have been shortages in some of the new proprietary hops because it takes a while to increase the acreage year over year to where you’re getting high yields, but the industry reacts to that every year.” Craft Beer Conversion While craft beer still makes up a fraction of total beer sales, Elkins says craft beer is on the track to even more growth over the next five to ten years. “There are still an awful lot of people that haven’t tried craft beer yet,” Elkins told Beverage Daily. “Or maybe they’ve tried one that’s too much of a leap” in terms of flavor and aroma. According to Elkins, the best way to expand consumers’ palate is to offer awide choice of craft beers using a variety of hops, and to ease them into craft beer with less “hoppy” flavor notes like a pilsner or lager. Craft beer in the US Small and independent craft brewers account for a 12% market share of the US beer industry by volume. In 2015 there was a 13% increase in volume, and 16% increase in value. “It doesn’t just have to be an IPA,” Elkins said. “That’s like going from processed cheese to gorgonzola overnight.” Answers the Locavore Need Elkins credits part of craft beer’s rise in popularity to a growing number of consumers who want to know the origin of their products. Unlike major mass market beer products, craft beer is typically brewed locally on a much smaller scale and therefore tends to have varying flavor profiles. “Breweries aren’t beholden to producing a specific type of beer day in and day out,” Elkins said. An Affordable Luxury Elkins believes that craft beer allows consumers to indulge and is a more approachable product compared to other alcohol product like wine, where prices are typically higher. “Beer is much more approachable than say, wine. People know what a beer is. They can also experiment with different styles,” Elkins said. “As opposed to buying a bottle of wine that you’re not familiar with. I also think craft beer allows them to treat themselves a little bit without breaking the bank.” ‘Better Beer’ Category? Craft beer has been termed by those in the industry as the “better beer category,” and while a fan of craft beer, Elkins believes that this description is not a fair assessment. According to Elkins, craft beer will never replace mass market beer brands, and that should never be the goal. He believes the recent acquisitions of small craft brewers by big players in the beer industry have positive aspects, because they get more craft beer into more places.
Editor’s Note: The figures above for craft beer market penetration (10 to 12%) are for all of the U. S., and for Canadian provinces like British Columbia, Ontario and Quebec, but, based on availability of craft beer around the province we suggest that for Saskatchewan the number would be more like 3%. 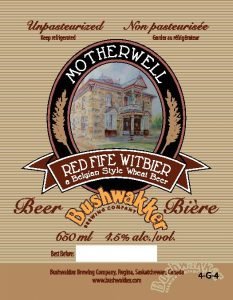 This is a story of self-control and marksmanship by a brave, cool-headed woman with a small caliber pistol pitted against a fierce predator. Here is that same brave, brave woman’s story in her own words: "While out walking along the edge of a pond just outside my house in The Villages with my soon to be ex-husband discussing property settlement and other divorce issues, we were surprised by a huge 12-ft. alligator which suddenly emerged from the murky water and began charging us with its large jaws wide open. She must have been protecting her nest because she was extremely aggressive. If I had not had my little .25 caliber pistol with me, I would not be here today! Just one shot to my estranged husband's knee cap was all it took. Brings a tear to your eye doesn’t it?