Our premium wines for August are California’s Middle Sister Wines. The red is their Mischief Maker Cabernet Sauvignon, the white is their Drama Queen Pinot Grigio. Both are $8.50/glass and $23.95/half litre. Our guest tap is currently pouring a kettle sour from Nokomis Craft Ales in Nokomis, Saskatchewan. $7.95 for a pint. Next up is Hopped Bunny Hugger Cherry Cider from Living Sky Winery in Perdue, Saskatchewan. $7.95 for a half pint. Enjoy Bushwakker beer on tap every Thursday night at The MacKenzie Art Gallery this summer! The Candahar is one of their most interactive installations to date. Created by Winnipeg-based artist, Theo Sims, this replica of a Belfast pub complete with Bushwakker beer on tap will whisk you away from the queen city to 1990's Ireland. This week's local celebrity guest bartenders on August 11th will be Judy Wensel and Kris Alvarez. http://mackenzieartgallery.ca/engage/exhibitions/theo-sims-the-candahar The Bushwakker is now OPEN ON SUNDAYS from Noon to Nine. Enjoy our Sunday Steak & a Pint feature. We are seeing lots of folks coming in for offsale and growler fills with smiles on their faces! We now have tickets available to the Regina Symphony Orchestra’s Symphony Under The Sky event which takes place on Saturday, August 27th at the Motherwell Homestead national historic site. The Bushwakker will be there pouring our Motherwell Red Fife Witbier. Tickets $15 each. 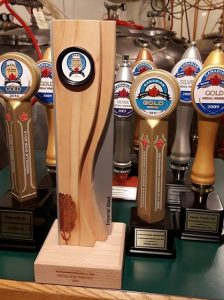 We recently experienced a very exciting day in the Bushwakker brewery! Our 2016 Canadian Brewing Awards trophy just arrived. The Revenge of The Tartan Tzar Bushwakker 25th Anniversary Russian Imperial Stout did our little brewpub proud. The new CBA wooden trophy design is certainly...unique! It now proudly sits on the highest shelf behind the bar.   Bushwakker floor manager, Cheryl Tovey, needs your help! If she raises $10,000 by September 8th she will SHAVE HER HEAD IN THE MIDDLE OF THE BUSHWAKKER! All proceeds raised will be donated to Ovarian Cancer Research. You can help Cheryl in two ways. Visit the Ovarian Cancer Walk of Hope website and donate to The Tovey Sisters Sh*t Show Team or purchase a ticket to Cheryl’s Head Shave Burger & Beer Night. Tickets are $30 and are available at The Bushwakker.

Aug. 5: FIRST FIRKIN FRIDAY. Enjoy the pomp and circumstance of this longstanding Bushwakker tradition as a small keg of special ceremonial beer is paraded throughout the pub lead by a piper from The Regina Police Pipes & Drums. A volunteer is selected to tap the firkin quite often with suds-soaking results. This month's offering will be our Saskadian Black IPA. The coffee character will be enhanced with a carefully selected cold pressed coffee from 33 1/3 Coffee Roasters. 5:30 PM. Aug. 8: Monday Night Jazz & Blues. TERRAPLANE. Regina’s friendliest bluesman, Shane Reoch, brings his family band and a Bushwakker bassist too! 8:00 PM. Aug. 10: Wednesday Night Folk. SUMMER SINGER/SONGWRITER SHOWCASE. Enjoy three fine Regina singer/songwriter acts; Mark Wilson & Neil Child, Trent Leggott, and Devon Floyd from The Lonesome Weekends. 9:00 PM. Aug. 13: SASK VS. CALGARY. The lone August home game kicks off at 5:00 PM. Enjoy our gourmet Calgary Burger & a Pint feature for only $17.95 and “devour” the competition! Aug. 15: Monday Night Jazz & Blues. AZ PARIS. A return engagement from this veteran blues band. The real deal. 8:00 PM. Aug. 17: Wednesday Night Folk. THE LINCOLN LOGGERS. Folk/ rock/country act playing original and cover material makes their Bushwakker debut. 9:00 PM. Aug. 19: MOTHERWELL RED FIFE WITBIER FIRKIN PREVIEW. The Bushwakker is a proud partner of Parks Canada this summer and has been asked to once again brew our extremely popular Motherwell Homestead commemorative brew, as part of Parks Canada’s 2016 celebrations. Motherwell Red Fife Witbier, utilizes the historic Red Fife wheat in its production. This special Belgian-style wheat beer will be officially released at The Symphony Under The Sky event which will be held at the Motherwell Homestead on Saturday, August 27. Motherwell Homestead interpreters will be at the Bushwakker for a special Firkin Preview tapping of this refreshing commissioned brew on August 19 at 5:30. They will be wearing period dress and will briefly describe the big Motherwell Threshing Day/SUTS Grand Event. Don’t miss this opportunity to have an advance taste of this historic brew before it is officially unveiled later. Aug. 22: Monday Night Jazz & Blues. THE JEFF MERTICK BAND. Soulful blues vocals from this veteran blues act. 8:00 PM. Aug. 24: Wednesday Night Folk. THE RYAN HICKS TRIO. Pop/folk/rock from this talented veteran Regina singer/songwriter. 9:00 PM. The following article discusses common questions brewers and brewery tour guides love to talk about but are seldom asked. We offer responses to these questions from a Bushwakker point of view below.

Have you ever reached the end of a brewery tour, and there’s that uncomfortable moment when the tour guide asks if anyone has questions — and all you hear are crickets? America’s small and independent breweries have stories, personalities and their own set of challenges that you may not hear about in the taproom. A brewery tour is your chance to get to know them intimately — and you want to be asking the right questions. “I’d love for our guests to ask more about the breadth of ingredients that breweries are using, and not using, to make the beers they drink,” says Merlin Ward, head brewer at Wartega Brewing, a nano brewery in Brooklyn, New York. “Imagine if you could ask your chef why they chose the ingredients they use to make your favorite dish? During a brewery tour, you get that opportunity.” Jeff Stuffings, founder and owner of Jester King Brewery in Austin, Texas, wishes more tour goers would ask, “Are there laws that make it more difficult to operate your business successfully? What can we do to help change them?” Alicia Grasso, marketing director at Cape May Brewing Co. in New Jersey, says this is one rarely-asked question that her colleagues would love to field: “Why does Cape May have so many rules: no kitchen, no live entertainment, required tour?” Here are five questions brewers wish you would ask during a tour. 5. “How is your beer connected to the local area?” Careful thought often goes into weaving local ingredients and history into beer recipes and beer names. You may never know that the 1903 Berliner Weisse at St. Petersburg’s Green Bench Brewing Co. is named for the year the city was founded if you didn’t ask. Bushwakker – many of our brand names reflect prominent people in Saskatchewan, employees, family members or Saskatchewan landmarks. Stubblejumper Pils, Last Mountain Vienna Lager and Northern Lights Lager are obvious brand names. Our Palliser Porter is named after the explorer who claimed much of the Canadian Prairie was unsuitable for agriculture. Our Cheryl’s Blonde Ale is named after Bushwakker floor manager, Cheryl Tovey. Granny’s Bitter is a tribute to former Bushwakker general manager, Elaine Robertson. Elaine is still going strong and is the great grandmother of teenagers. 4. “What’s unique about your beer? Why is it relevant?” Each and every small and independent brewery in the U.S. is trying to find a way to stand out, and when you ask what’s different at a particularly brewery, you’re going to learn some very specific techniques your favorites breweries are using. Bushwakker – We were the third brewpub to open in Regina but Bushwakker was the city’s first full-mash brewpub. With 19 national awards and three international awards, the brewpub is known across the nation. Now celebrating 25 years of operation, the brewery produces over 30 brands of Bushwakker beer each year.  3. “Which beer was your first craft beer?” This is a question a lot of beer lovers ask their friends, and brewers say they want to tell you about the craft beers that made them fall in love with brewing, too. Everyone wants to share their story about what hooked them, even the people who are making the beer. Bushwakker - Our original six beers were; Granny’s Bitter, Regina Pale Ale, Palliser Porter, Northern Lights Lager, Stubblejumper Pils and Last Mountain Lager. Palliser Porter is a very significant beer because it won a national gold best-of-show award before even the idea of the Bushwakker existed. However, it was that award that gave the Bushwakker’s founders the confidence to move forward and go commercial. 2. “Is working at a brewery different than what you thought it would be?” Working to build America’s small and independent breweries is a dream job for a lot of us, but is it everything you’d think? Chances are the love of the job still trumps the long hours and (sometimes) hot, sticky work conditions inside a brewery. But ask! You’ll probably get answers you’d never expect. Bushwakker - There is a lot of hard work that goes into producing an award-winning brew. Proper recipe formulation, little tricks with fermentation temperatures and just going with gut instinct all play a role in creating fine beer. The Bushwakker brewery requires a fair bit of muscle from its brewers. The end of a day in the brewery often leaves the brewery team exhausted. 1. “What efforts do you make to be environmentally friendly?” Georgia’s SweetWater Brewing Co. is donating $100,000 to its “Save Our Water” campaign this summer. New Belgium Brewing is deeply committed to its sustainability goals. Jester King is now farming 58 acres of land around the brewery. Small and independent breweries are well aware of the resources used to make good beer, and they’d love to tell any tour group how they’re working towards being good stewards of the land and our planet. Bushwakker - Efforts are made to reduce water consumption but using ice to cool the wort instead of only city water. Some left-over water from wort cooling is stored in the mash tun and is used to clean the beer highway which is the series of pipes which connects three of the rooms in the brewery together. Some is processed and used to make the next day’s beer. The spent grain used to given to a local farmer to be used as livestock feed. We are now looking for another local farmer who would like this brewery by-product. If you know a local farmer who would like some free feed, please let us know. 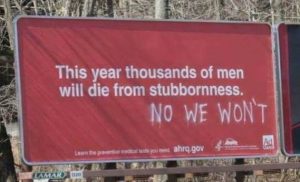 Bubba applied for an engineering position at a Lake Charles refinery. A Yankee applied for the same job and both applicants having the same qualifications were asked to take a test by the manager. Upon completion of the test, both men only missed one of the questions. The manager went to Bubba and said: "Thank you for your interest, but we've decided to give the Yankee the job." Bubba asked: "And why are you giving him the job? We both got nine questions correct. This being Louisiana, and me being a southern boy, I should get the job!" The manager said: "We have made our decision not on the correct answers, but rather on the one question that you both missed." Bubba then asked: "And just how would one incorrect answer be better than the other?" The manager replied: "Bubba, it’s like this. On question #4 the Yankee put down; "I don't know." You put down, "Neither do I."