Our July premium red wine feature is Luzon (Monastrell; organically grown) from Spain; $7.95 for a glass and $22.95 for a half litre. The white is Torreon De Paredes (Reserve Sauvignon Blanc; organically grown) from Chile; $8.95 for a glass and $24.95 for a half litre. Our guest tap is currently pouring Huell Pils from the Black Bridge Brewery in Swift Current. It's an unfiltered, hoppy pilsner showcasing Huell Melon hops which offer a distinct melon aroma; $7.95 for a pint. Next up is the 9 Mile Brewing Gose.  A soured beer, finished with coriander and light sea salt. The style originates from the German town of Goslar. Tickets to our August 4th Specialty IPA Tasting Event are now on sale and are over half sold. Evaluate ten specialty IPAs from all over the world. These wonderfully weird and beautifully bitter brews feature uncommon ingredients or brewing methods. Coffee-infused, fruit-infused, barrel-aged, kettle-soured, rye & honey-infused and even an imperial black milk IPA aged in scotch oak barrels! Plenty of door prizes too. Only 48 tickets will be made available. $34.95 each. WIN TWO TICKETS to our August 4th IPA Day Specialty IPA Tasting Event. Entering this contest is very easy! Just visit https://www.bushwakker.com/wakker-weekly-registration to sign up to receive our Wakker Weekly newsletter. Never miss out on another Bushwakker announcement or event again! Enjoy Bushwakker beer on tap every Thursday night at The MacKenzie Art Gallery this summer! The Candahar is one of their most interactive installations to date. Created by Winnipeg-based artist, Theo Sims, this replica of a Belfast pub complete with Bushwakker beer on tap will whisk you away from the queen city to 1990's Ireland. This week's local celebrity guest bartender on July 21st will be Jeanne Randolph. http://mackenzieartgallery.ca/engage/exhibitions/theo-sims-the-candahar The Bushwakker is now OPEN ON SUNDAYS from Noon to Nine. Enjoy our Sunday Steak & a Pint feature. We are seeing lots of folks coming in for offsale and growler fills with smiles on their faces! A big “thank-you” to the adoring throng who attended our special Second Firkin/Bon Voyage Brewer/Farewell Firkin Event on Friday, July 8th. Bushwakker head brewer, Mitch Dalrymple, has moved on to new brewing adventures in Alberta and this was his swan song public event. He created a firkin of “power-hopped” Granny’s Bitter which was led by three pipers from the Regina Police Services Pipes & Drums and was carried by Bushwakker brewery employees, Michael Gaetz (grandson of company founders, Bev and Elaine Robertson) and Bradley Dalrymple (Mitch’s son.) Michael will move into the head brewer position and Bradley will become the assistant brewer. Michael has worked as Mitch’s assistant for eight years and is excited about his expanded brewing responsibilities. Candace Daniel from Global Morning News Regina was the honourary firkin tapper and came prepared wearing her Global Regina rain gear. The firkin was drained in record time! Best of luck in your future brewing career Mitch and thanks for many years of brewing great Bushwakker beer! 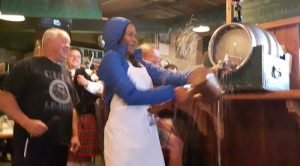 July 16: SASK vs. BC. Join the Sea of Green at The Bushwakker and enjoy our BC Burger & a Pint feature before, during or after the game. Think of it as "devouring" the competition! July 18: Monday Night Jazz & Blues – Special Edition. BRIAN BAGGETT - CD Release Party for “First Contact”. The latest CD from this talented Chapman Stick player. 8:00 PM. July 20: Wednesday Night Folk. THE RUSTY AUGERS. Don’t miss this annual performance from this Moose Jaw country rock act. 9:00 PM. July 22: SASK vs. OTTAWA. Enjoy our Ottawa Burger & a Pint feature before, during or after the game. Kickoff is at 7:00 PM. Come "devour" the competition! July 23: REGINA’S LION’S BAND 70TH ANNIVERSARY LION’S LAGER FIRKIN TAPPING & BOTTLE RELEASE. Thousands of music students passed through the band hall doors for many decades.  Band director, Bob Mossing, was at the helm of a locally admired and world renowned music organization which had a reputation for both musical and visual excellence. The RLB permanently enriched the lives of its members through personal development and performance, leading to a lifelong enjoyment of music. Join Bob at 4:00 PM for a procession and tapping of the firkin of Lion’s Lager. Only 70 bottles of the commemorative beer were produced and will be made available immediately following the band director’s suds-soaking! July 25: Monday Night Jazz & Blues. THE JAZZ BAND-ITS. Enjoy big band, jazz and swing from the largest band to ever grace the Bushwakker stage. 8:00 PM. July 27: Wednesday Night Folk. RUGGED LITTLE THING. Toe tapping bluegrass, old time and folk music from this Saskatoon group making their Bushwakker debut. 9:00 PM. July 29 – 31: August Long Weekend Keg Event. Receive free ice, cups, coasters and the loan of a keg chiller tub with the purchase of any one of our four sizes of kegs this long weekend. We have the right size and right brand of Bushwakker beer for any gathering - big or small! July 30: FOOD DAY CANADA 2016. The largest food event in the country encourages people to celebrate local food and community. The Bushwakker will once again be participating and Bushwakker Executive Chef, Mike Monette, will source some fresh local bounty to create something very delicious and truly Saskatchewan!

Can Big Be Craft? Can Corporate be Craft?

By Jason Foster   June 30th, 2016 I was challenged the other day by a representative of a unnamed brewing corporation. They claimed that my columns were biased against the big brewers and that I was providing distorted and misleading information about them. Specifically they took offense at how I frame some of their so-called craft-y or pseudo-craft offerings. As it turns out their claims of my factual distortions were more about hair-splitting and word nuances than actual, you know, factual problems. But the crux of their critique was not the details of the facts but my criticisms of how they conduct their business at times. My primary response is simply that I am tasked in my columns (and choose to here at onbeer.org) with offering knowledgeable opinion about all matters beer and that is exactly what I do. Whether the subjects of my views are pleased with what I say is a different matter altogether. I endeavour to be even-handed, open and fair, but that is not the same as refusing to take a stand. I have and always will take a position on a matter of importance to craft beer. I find the timing of the critique quite fortuitous actually, as it came just a few days before my latest Beer 101 column was published. The column, which was actually penned well before said criticism came my way, emerges from the recent spate of corporate buy-outs of independent craft breweries – Mill Street being the latest Canadian example. It uses these mergers as a springboard to discuss the question of whether size matters in terms of craft beer. The main focus of the piece is actually not the corporate brewers but the independent craft breweries that have grown quite large – the Sierra Nevadas, Samuel Adams and New Belgiums of the world. Here in Canada we might include Big Rock, Steam Whistle, and/or McAuslan on that list. Can a brewery become too big to be considered a craft brewer? Many answer yes. Others disagree. It is an age-old argument that will likely never be fully resolved. Similarly what are we to do with craft breweries gobbled up by the corporate brewers? Do we strip them of their craft credentials because the profits now flow to a corporate HQ somewhere in the world (usually not Canada, by the way)? Are Goose Island, Elysian, Lagunitas and so on sell-outs? Similarly should we be besmirching Unibroue, Mill Street, Granville Island and Creemore Springs? My answer to both sets of questions is clear – and familiar to regular readers  of  this  site. How we view the status of the corporatized breweries and the over-sized independent breweries should be determined exclusively by their approach to the beer. For me craft beer is not a category or a label. It is an approach to brewing, one that elevates quality and craftmanship in the beer and demands integrity, honestly and openness in marketing and sales. Craft beer is a principle. Which makes the task of determining what is craft deceptively easy. Size doesn’t matter. Ownership doesn’t matter. It is what in the bottle/can that counts. Obviously we will all reach different conclusions about specific breweries, but at least that is a debate grounded in agreed-upon assumptions.The column also highlights – for me anyway – the flaw in the logic of the corporate representative who chastized me. They interpreted my critiques as a criticism of the big brewers. Actually they are a criticism of practices that violate craft beer principles. Don’t engage in those practices and you won’t be criticized. 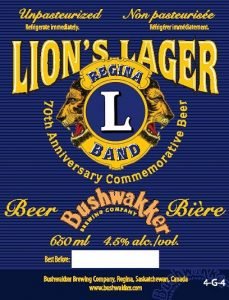 A couple of rednecks went on vacation in Colorado. They flew to Denver and rented a car to sight see. One of the sights was a bridge that was more than 1,000 feet above the river. Walking out onto the bridge, they noticed it swaying in the wind. "I don't think I want to drive the car across this bridge," one said to the other. "What are you worried about?” the second replied. "It's a rental."