Our July premium red wine feature is Luzon (Monastrell; organically grown) from Spain; $7.95 for a glass and $22.95 for a half litre. The white is Torreon De Paredes (Reserve Sauvignon Blanc; organically grown) from Chile; $8.95 for a glass and $24.95 for a half litre. Our guest tap is currently pouring one of the few remaining kegs of Prairie Sun Meewasin 80 left in the province. A witbier style infused with spruce and pine branches harvested near the brewery in Saskatoon; $7.95 for a pint. Next up is the Huell Pils from the Black Bridge Brewery in Swift Current. It's an unfiltered, hoppy pilsner showcasing Huell Melon hops which offer a distinct melon aroma. WIN TWO TICKETS to our August 4th IPA Day Specialty IPA Tasting Event. Entering this contest is very easy! Just visit https://www.bushwakker.com/wakker-weekly-registration to sign up to receive our Wakker Weekly newsletter. Never miss out on another Bushwakker announcement or event again! Enjoy Bushwakker beer on tap every Thursday night at The MacKenzie Art Gallery this summer! The Candahar is one of their most interactive installations to date. Created by Winnipeg-based artist, Theo Sims, this replica of a Belfast pub complete with Bushwakker beer on tap will whisk you away from the queen city to 1990's Ireland. This week's local celebrity guest bartender on July 14th will be Judy Anderson. http://mackenzieartgallery.ca/engage/exhibitions/theo-sims-the-candahar The Bushwakker is now OPEN ON SUNDAYS from Noon to Nine. Enjoy our Sunday Steak & a Pint feature. We are seeing lots of folks coming in for offsale and growler fills with smiles on their faces!

The Bushwakker Local Artist Wall for July features the works of four artists:

Doreen Hoggarth: dmhoggarth@accesscomm.ca I became a hobby painter after retiring from the medical field. I have taken numerous painting classes from the Life Long Learning Centre in Regina. I specialize in landscapes, flowers and birds. Several of my paintings grace the homes of children, grandchildren and great grandchildren. Shiela Mitchell: shiela.mitchell@gmail.com Upon retirement in 2003, after raising a family of four, teaching for 19 years in several Saskatchewan communities, one of my goals was to take an art class. I had gained an interest in art while having to wear an Art Teacher hat during more than one school year. We all know that in rural Saskatchewan schools, teachers often become involved in many subject areas outside their comfort zone. This can be a good thing. I have taken some workshops and varied classes from the LLLC from inspiring professionals who have made ART their life work. Presently, I continue to paint on a regular basis with friends to share ideas, laugh and create what moves me. I have a wide and varied interest in subject matter from landscape, still life and the use of photos for inspiration. Linda Tidball: regsask@gmail.com I was born in Regina and continue to live in the city. I have always been interested in creating and have done many crafts over the years. After retiring from a career as a medical laboratory technologist I began cultivating an interest in art. I have taken classes in acrylics, mixed media, oils, pastels, watercolor and encaustic wax all taught by local artists as well as participating in workshops lead by visiting artists. My focus has been on still life and landscapes. My husband and I enjoy taking photographs which are inspirations for my paintings. I am currently a member of the Aurora Art Guild and enjoy working and painting with fellow artists. Trina Wirth: t.wirth@accesscomm.ca I was born and raised in Regina. I am the middle child of seven. I have enjoyed art from a young age. I have done many crafts over the years such as pottery, paper tole, folk art, sewing and ceramics. In later years I started taking painting classes from local artists. I have worked with water colors, acrylicsmixed medium and oils. I recently joined the Aurora Art Guild to further my knowledge and participation in art. 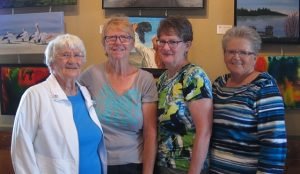 July 8: SECOND FIRKIN FRIDAY – BON VOYAGE BUSHWAKKER BREWER SPECIAL EDITION – THE FAREWELL FIRKIN. Because the first Friday of the month fell on the Canada Day holiday when we were closed, we will offer a special Second Firkin Friday. Enjoy the same pomp and circumstance complete with a piper from The Regina Police Pipes & Drums leading a small keg of specially created beer throughout the pub in a procession. Candace Daniel from Global News Morning Regina will wield the hand-made wooden maul affectionately named The Mighty Firkin Wakker and attempt to tap the firkin in one mighty blow. Bushwakker head brewer, Mitch Dalrymple, has accepted a head brewer position at a new Alberta microbrewery so this will be his final firkin presentation. Be sure to stop by to wish him all the best. This particular firkin tapping edition will be so momentous, there may even be television cameras present! See you at 5:30! July 11: Monday Night Jazz & Blues. LITTLE CHICAGO. Guitarist, Ray Eberle, leads this honest-to-goodness, down-and-dirty trio in an evening of really...good...blues! 8:00 PM. July 13: Wednesday Night Folk. THE UPSIDE OF MAYBE. Pop-folk-rock act on a cross Canada tour. Back for a return engagement! 9:00 PM. July 16: SASK vs. BC. Join the Sea of Green at The Bushwakker and enjoy our BC Burger & a Pint feature before, during or after the game. Think of it as "devouring" the competition! July 18: Monday Night Jazz & Blues – Special Edition. BRIAN BAGGETT. A CD Release Party for “First Contact”. The latest CD from this talented Chapman Stick player. 8:00 PM. July 20: Wednesday Night Folk. THE RUSTY AUGERS. Don’t miss this annual performance from this Moose Jaw country rock act. 9:00 PM. July 22: SASK vs. OTTAWA. Enjoy our Ottawa Burger & a Pint feature before, during or after the game. Kickoff is at 7:00 PM. Come "devour" the competition! July 25: Monday Night Jazz & Blues. THE JAZZ BAND-ITS. Enjoy big band, jazz and swing from the largest band to ever grace the Bushwakker stage. 8:00 PM. July 27: Wednesday Night Folk. RUGGED LITTLE THING. Toe tapping bluegrass, old time and folk music from this Saskatoon group making their Bushwakker debut. 9:00 PM. July 29 – 31: August Long Weekend Keg Event. Receive free ice, cups, coasters and the loan of a keg chiller tub with the purchase of any one of our four sizes of kegs this long weekend. We have the right size and right brand of Bushwakker beer for any gathering - big or small! July 30: FOOD DAY CANADA 2016. The largest food event in the country encourages people to celebrate local food and community. The Bushwakker will once again be participating and Bushwakker Executive Chef, Mike Monette, will source some fresh local bounty to create something very delicious and truly Saskatchewan!

You Should Be Aging Bad Beer

By Zach Fowle,  June 28, 2016 An expert on vintage ales says beers that are terrible fresh are the ones that perform best in the cellar. The next time you taste a beer that’s cloyingly sweet, motor-oil thick and has as much alcohol burn as a shot of vodka, here’s what you should do: Go out and buy another one. At least, that’s what Patrick Dawson says you should do. He should know—as the author of “Vintage Beer: A Taster’s Guide to Brews That Improve,” Dawson quite literally wrote the book on beer cellaring. (He’s also written about drinking really old beer for us before.) And he suggests that, rather than the relatively clean and well-constructed brews that commonly make it inside beer geek closets, the ones we should be aging actually taste pretty awful when released. “I’ve talked to a couple guys who have been able to drink Thomas Hardy’s fresh—apparently you used to be able to get it near the brewery before they even aged it—and they’re like, ‘That stuff tasted like rocket fuel.’ You couldn’t even choke it down,” Dawson says. “But, oh, that’s one of the best aging beers of all time.” Dawson proposes that the best beers for your cellar are extremely thick in body, taste overly sweet and lean heavy in alcohol when fresh. To understand why, you first need to recognize what’s going on inside a bottle of beer as it ages. First, malt sweetness fades over time. This is because beer isn’t a liquid, but a bunch of stuff suspended in a liquid (otherwise known as a colloid) and the complex sugars floating around inside a fresh beer tend to drop out of that suspension when it’s aged. This tends to make the beer taste less sweet, and has the added effect of thinning out the body. “For me, a big red flag if I’m going to age a strong beer is if it’s kind of thin already,” Dawson says. “I want almost a syrupy sweet, cough syrup thickness, because after it ages for five years, that body is maybe going to be cut in half, or at least drastically reduced, and I want there to be something left over at the end.” Another of Dawson’s requirements: “heat,” or alcohol burn. If the beer isn’t hot enough, meaning it doesn’t have a large amount of tongue-numbing fusel alcohols, it won’t develop as much complexity as it ages. “Maybe I have a high-alcohol beer, like 10% ABV, but if it drinks really smooth, that’s actually a deterrent for me because fusel alcohols are building blocks for a lot of these different flavor compounds that appear, specifically dried fruit flavors. For those to come about, there need to be fusel alcohols,” he says.So a dream barleywine, stout or Belgian ale bound for the cellar, Dawson says, is “basically screaming hot—like, it just tastes like rubbing alcohol—and is syrupy sweet.” “Over time, that’s going to develop so much more complexity and have enough body that by the time I drink it, it doesn’t feel like a Diet Coke,” he says. You heard the man. Get out there and buy some shitty beer. 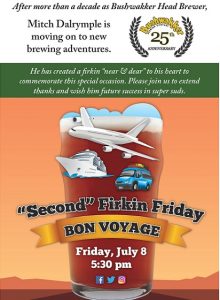 Join us as we bid farewell to Bushwakker head brewer, Mitch Dalrymple

A lady is having a bad day at the tables in Vegas. Down to her last $100, completely exasperated, she cries, "What rotten luck! What in the world should I do now?" A gent next to her, trying to calm her down a bit, calmly suggests, "I don't know... Why don't you play your age?" He walks away. Moments later, his he is intrigued to hear a great commotion at the roulette table. Maybe, she won! Rushing back to the table and pushing his way through the crowd, he is stunned to see the lady lying limp on the floor, with the table operator kneeling over her. He asks, "What happened? Is she all right?" The operator replies, "I don't know, buddy.... She put all her money on 29. When 36 came up she fainted!"