Our July premium red wine feature is Luzon (Monastrell – organically grown) from Spain; $7.95 for a glass and $22.95 for a half litre. The white is Torreon De Paredes (Reserve Sauvignon Blanc – organically grown) from Chile; $8.95 for a glass and $24.95 for a half litre. Our guest tap is currently pouring one of the few remaining kegs of Prairie Sun Meewasin 80 left in the province. A witbier style infused with spruce and pine branches harvested near the brewery in Saskatoon. $7.95 for a pint. Next up is the Huell Pils from the Black Bridge Brewery in Swift Current. It's an unfiltered, hoppy pilsner showcasing Huell Melon hops which offer a distinct melon aroma.

Motherwell Homestead National Historic Site, together with the Regina Symphony Orchestra, Friends of Motherwell Homestead and The Bushwakker Brewpub won the 2016 Parks Canada CEO Awards of Excellence in the category of 'Facilitating Memorable Visitor Experiences' for the Symphony under the Sky at Motherwell Homestead event in August 2015. This is the most prestigious national honour awarded by Parks Canada agency, and it recognizes Parks Canada members and partners who have demonstrated a high level of excellence and achieved outstanding results. The event was a roaring success and something to make all of us proud. On a day that traditionally sees 300 visitors to the site, over 2500 people came out to to experience the unique and exciting combination of a symphony performance, the unveiling of the Bushwakker Brewpub's commemorative Motherwell Red Fife Witbier with special participation from the Motherwell Family, fly-past from the Royal Canadian Air Force, food and craft vendors, childrens’ activities, animals, and traditional farming and food preparation demonstrations. It was a highly successful event with hundreds of people telling organizers they had never experienced a day of activities so new and wonderful! WIN TWO TICKETS to our August 4th IPA Day Specialty IPA Tasting Event. Entering this contest is very easy! Just visit https://www.bushwakker.com/wakker-weekly-registration to sign up to receive our Wakker Weekly newsletter. Never miss out on another Bushwakker announcement or event again! Enjoy Bushwakker beer on tap every Thursday night at The MacKenzie Art Gallery this summer! The Candahar is one of their most interactive installations to date. Created by Winnipeg-based artist, Theo Sims, this replica of a Belfast pub complete with Bushwakker beer on tap will whisk you away from the queen city to 1990`s Ireland. This week's local celebrity guest bartender on July 7th will be Belle Plaine and Blake Berglund. http://mackenzieartgallery.ca/engage/exhibitions/theo-sims-the-candahar The Bushwakker is now OPEN ON SUNDAYS from Noon to Nine. Enjoy our Sunday Steak & a Pint feature. We are seeing lots of folks coming in for offsale and growler fills with smiles on their faces!

June 30: SASK vs. TORONTO. Be sure to stop by the Bushwakker and join the Sea of Green before, during or after this Thursday night season opening home game and enjoy our Toronto Burger & a Pint special for only $17.95. Think of it as “devouring” the competition. Kick-off is at 8:00 PM. July 1: CLOSED. Happy Canada Day! A very special “Bon Voyage Brewer” edition of First Firkin Friday will take place next Friday! 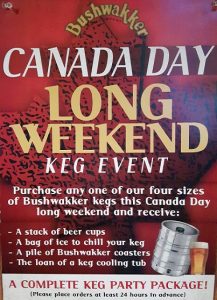 July 2 – 3: CANADA DAY LONG WEEKEND KEG EVENT. Receive free ice, cups, coasters and the loan of a keg chiller tub with the purchase of any one of our four sizes of kegs this long weekend. We have the right size and right brand of Bushwakker beer for any gathering - big or small! July 4: Monday Night Jazz & Blues. THE KASHA FAMILY BAND. Veteran Regina trumpet player, KEVIN KASHA, brings down his own talented crew for their Bushwakker debut. 8:00 PM. July 6: Wednesday Night Folk. BRIAN VOLKE & FRIENDS. Former Celtic Clutter frontman returns to Regina for a very special show. 9:00 PM. July 8: SECOND FIRKIN FRIDAY – BON VOYAGE BUSHWAKKER BREWER SPECIAL EDITION – THE FAREWELL FIRKIN. Because the first Friday of the month falls on the Canada Day holiday when we will be closed, we offer a special Second Firkin Friday. Enjoy the same pomp and circumstance complete with a piper from The Regina Police Pipes & Drums leading a small keg of specially created beer throughout the pub in a procession. A special volunteer will wield the hand-made wooden maul affectionately named The Mighty Firkin Wakker and attempt to tap the firkin in one mighty blow. Bushwakker head brewer, Mitch Dalrymple, has accepted a head brewer position at a new Alberta microbrewery so this will be his final firkin presentation. Be sure to stop by to wish him all the best. This particular firkin tapping edition will be so momentous, there may even be television cameras present! See you at 5:30! July 11: Monday Night Jazz & Blues. LITTLE CHICAGO. Guitarist, RAY EBERLE, leads this honest-to-goodness, down-and-dirty trio in an evening of really...good...blues! 8:00 PM. July 16: SASK vs. BC. Join the Sea of Green at The Bushwakker and enjoy our BC Burger & a Pint feature before, during or after the game. Think of it as "devouring" the competition! July 18: Monday Night Jazz & Blues – Special Edition. BRIAN BAGGETT. A CD Release Party for “First Contact”. The latest CD from this talented Chapman Stick player. 8:00 PM. July 20: Wednesday Night Folk. THE RUSTY AUGERS. Don’t miss this annual performance from this Moose Jaw country rock act. 9:00 PM. July 22: SASK vs. OTTAWA. Enjoy our Ottawa Burger & a Pint feature before, during or after the game. Kickoff is at 7:00 PM. Come "devour" the competition! July 25: Monday Night Jazz & Blues. THE JAZZ BAND-ITS. Enjoy big band, jazz and swing from the largest band to ever grace the Bushwakker stage. 8:00 PM. July 27: Wednesday Night Folk. RUGGED LITTLE THING. Toe tapping bluegrass, old time and folk music from this Saskatoon group making their Bushwakker debut. 9:00 PM.

Celebrate Ontario Craft Beer Week with Locally-Crafted Brew June 14, 2016 – Burlington, Ontario – Agriculture and Agri-Food Canada To kick off Craft Beer Week, the Ontario government and the Government of Canada are investing over $1.6 million in the projects of 20 craft breweries across Ontario to help them expand operations and to continue to  grow the province's craft beer industry. These projects include a range of business development activities, from major capital investments to human resource development to marketing strategy and are helping to increase the productivity, capacity and competitiveness of Ontario's craft breweries. Ontario Craft Beer Week runs from June 10-19, when hundreds of Ontario's world-class craft beers are being featured at grassroots events throughout the province. This week offers the people of Ontario a chance to celebrate this growing industry and expose them to the premium quality and culture of the province's many craft beers. This funding is delivered jointly by the federal and provincial governments through Growing Forward 2, a federal-provincial-territorial initiative that supports programs aimed at improving innovation, competitiveness, market development, adaptability and industry sustainability in Canada's agri-food and agri-products sectors. These investments help achieve the federal government's goal to support the agricultural and agri-food sector in a way that allows it to be a leader in job creation and innovation. Quick facts •Craft beer is a rapidly expanding industry in Ontario, employing more than 1,500 people in direct brewery jobs, and generating more than $69 million in sales last year at the Liquor Control Board of Ontario (LCBO). •New opportunities for the sale of beer are being created in groceries stores across Ontario. •Currently, there are approximately 140 craft breweries currently operating across Ontario, approximately 70 of which sell product via the LCBO network. •This sector has seen significant year-over-year increases in revenues - up nearly 35 per cent annually in 2015-2016. •Since 2013, the governments of Canada and Ontario have committed more than $38 million to more than 750 projects for food, beverage and processor businesses through Growing Forward 2 cost-shared funding assistance. Quotes "Ontario’s craft beer industry is a great success story for this province. Craft brewers continue to build on new market opportunities in the production and sale of a range of premium quality beers. As Ontarians enjoy the activities of this year’s Craft Beer week, we are very excited to announce our support for Ontario’s brewers by making key investments in the development of their businesses." Lawrence MacAulay, Minister of Agriculture and Agri-Food "Ontario’s craft beer industry is rapidly expanding, exposing consumers to the premium quality and culture of beer made with locally-sourced ingredients. By supporting our small brewers, we are supporting local communities to grow Ontario’s economy while building on the industry’s booming success. To recognize craft beer, we are celebrating Ontario Craft Beer Week from June 10 to 19. I invite Ontarians to participate in the multiple festivals and events organized across the province and connect with the passionate people making Ontario craft beer." Jeff Leal, Ontario Minister of Agriculture, Food and Rural Affairs 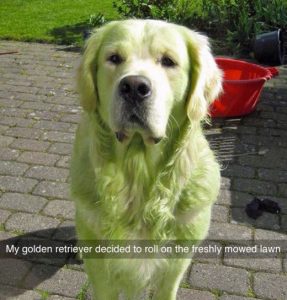 A man decided to have a face lift for his birthday. He spends $ 5,000 and feels really good about the result. On his way home he stops at a newsstand and buys a paper. Before leaving he says to the salesclerk, "I hope you don't mind me asking, but how old do you think I am?" "About 35," was the reply. "I'm actually 47," the man says, feeling really happy. After that he goes into McDonalds for lunch, and asks the order taker the same question, to which the reply is, "Oh you look about 29." "I am actually 47." This makes him feel really good. While standing at the bus stop he asks an old woman the same question. She replies, "I am 85 years old and my eyesight is going. But when I was young there was a sure way of telling a man’s age. If I put my hand down your pants and play with your hairy walnuts for ten minutes I will be able to tell your exact age." As there was no one around, the man thought what the hell and let her slip her hand down his pants. Ten minutes later the old lady says, "OK, it's done. You are 47." Stunned the man says, "That was brilliant! How did you do that?" The old lady replies, "I was behind you in McDonalds."