Our June premium red wine feature is Miguel Torres 5G (Garnacha) from Spain; $7.95 for a glass and $22.95 for a half litre. The white is Yalumba Y Series (Pinot Grigio) from Australia; $8.95 for a glass and $24.95 for a half litre. Our guest tap is currently pouring one of the few remaining kegs of Prairie Sun Meewasin 80 left in the province. A witbier style infused with spruce and pine branches harvested near the brewery in Saskatoon. $7.95 for a pint. Next up is the Huell Pils from the Black Bridge Brewery in Swift Current. It's an unfiltered, hoppy pilsner showcasing Huell Melon hops which offer a distinct melon aroma. WIN TWO TICKETS to our August 4th IPA Day Specialty IPA Tasting Event. Entering this contest is very easy! Just visit https://www.bushwakker.com/wakker-weekly-registration to sign up to receive our Wakker Weekly newsletter. Never miss out on another Bushwakker announcement or event again! We are receiving some very positive customer feedback on our new full menu. This special 25th Bushwakker Anniversary menu edition is full of fresh stories, fresh menu items, more choice and a cleaner look! Let us know what you think at bar@bushwakker.com. Enjoy Bushwakker beer on tap every Thursday night at The MacKenzie Art Gallery this summer! The Candahar is one of their most interactive installations to date. Created by Winnipeg-based artist, Theo Sims, this replica of a Belfast pub complete with Bushwakker beer on tap will whisk you away from the queen city to 1990`s Ireland. This week's local celebrity guest bartender on June 30th will be Marshall Burns of Rah Rah. http://mackenzieartgallery.ca/engage/exhibitions/theo-sims-the-candahar The Bushwakker is now OPEN ON SUNDAYS from Noon to Nine. Enjoy our Sunday Steak & a Pint feature. We are seeing lots of folks coming in for offsale and growler fills with smiles on their faces!

June 27: Monday Night Jazz & Blues. HOODOO. Young new blues act lead by guitarist, Ethan Reoch. 8:00 PM. June 29: Wednesday Night Folk. RON LOOS. Pop covers from this talented guitar plucker. 9:00 PM. June 30: SASK vs. TORONTO. Be sure to stop by the Bushwakker and join the Sea of Green before, during or after this Thursday night season opening home game and enjoy our Game Day Burger & a Pint special for only $17.95. Think of it as “devouring” the competition. Kick-off is at 8:00 PM. Best of luck in 2016 Riders!!! 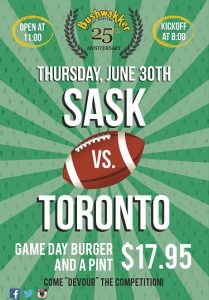 July 1: CLOSED. Happy Canada Day! First Firkin Friday will take place on the next Friday! July 2 – 3: CANADA DAY LONG WEEKEND KEG EVENT. Receive free ice, cups, coasters and the loan of a keg chiller tub with the purchase of any one of our four sizes of kegs this long weekend. We have the right size and right brand of Bushwakker beer for any gathering - big or small! July 4: Monday Night Jazz & Blues. THE KASHA FAMILY BAND. Veteran Regina trumpet player brings down his own talented crew for their Bushwakker debut. 8:00 PM. July 6: Wednesday Night Folk. BRIAN VOLKE & FRIENDS. Former Celtic Clutter frontman returns to Regina for a very special show. 9:00 PM. July 8: SECOND FIRKIN FRIDAY – BON VOYAGE BUSHWAKKER BREWER SPECIAL EDITION – THE FAREWELL FIRKIN. Because the first Friday of the month falls on the Canada Day holiday when we will be closed, we offer a special Second Firkin Friday. Enjoy the same pomp and circumstance complete with a piper from The Regina Police Pipes & Drums leading a small keg of specially created beer throughout the pub in a procession. A special volunteer will wield the hand-made wooden maul affectionately named The Mighty Firkin Wakker and attempt to tap the firkin in one mighty blow. Bushwakker head brewer, Mitch Dalrymple, has accepted a head brewer position at a new Alberta microbrewery so this will be his final firkin presentation. Be sure to stop by to wish him all the best. This particular firkin tapping edition will be so momentous, there may even be television cameras present! See you at 5:30! July 11: Monday Night Jazz & Blues. LITTLE CHICAGO. Guitarist, Ray Eberle, leads this honest-to-goodness, down-and-dirty trio in an evening of really...good...blues! 8:00 PM. July 16: SASK vs. BC. We certainly experienced a massive Sea of Green at The Bushwakker for the pre-season home game opener. Enjoy our Game Day Burger & a Pint feature before, during or after the game. Think of it as "devouring" the competition! Go Riders go!

By BOB PEASE ANHEUSER BUSCH-INBEV, the world’s largest brewer, recently made headlines by announcing that it would temporarily rename Budweiser, one of its best-selling beers, as America. It’s a curious name choice, not only because AB-InBev is based in Belgium, but also because of what the new name stands for: independence. As Anheuser-Busch InBev looks to finalize a $107 billion merger with SABMiller, the world’s second-largest brewer, federal antitrust authorities need to weigh what this means for the growing number of small brewers and independent distributors who are driving the industry. Recent reports say that antitrust authorities are likely to approve the deal by the end of the month. If they do so without adequate protections, the merger could stifle consumer choice and choke off America’s beer renaissance. Today there are more breweries in this country than at any time in history — some 4,300, with scores coming online every year, producing a vast variety of styles, from low-alcohol “lawn mower beers” to high-octane Russian imperial stouts. Thanks to the innovative nature of small start-up breweries, new styles and substyles seem to emerge every day. America’s beer drinkers want choice. They want variety. They want quality and authenticity. As an industry, we need to give them that — but we can do so only if the market is a level playing field. But state laws usually don’t allow brewers to sell their products themselves; instead they have to use distributors, which hold enormous sway over which beers end up at which bars, restaurants and stores. The   problem   is   that,   along   with  being   the  world’s largest  brewer, InBev is also the biggest beer distributor in the United States. And in several states, the law allows the company to distribute its own beer — and most markets have only one or two distributors. The company has also recently increased its control over the beer-distribution industry by purchasing five independent distributors (acquisitions that prompted a Department of Justice inquiry last fall). That means that Anheuser-Busch InBev can focus on building its own brands while effectively, and legally, shutting out competing craft brands. The company, which already controls 45 percent of the domestic beer market, also encourages independent distributors to focus on selling its brands over craft brands. The company recently introduced its Voluntary Anheuser-Busch Incentive for Performance program, which pays distributors on a sliding scale based on the share of its beers they sell — which means that if they sell craft beers, they lose money (the Department of Justice is examining this program as well). Distribution isn’t the only front in Anheuser-Busch InBev’s war on the small brewers represented by my organization. Since its merger with SABMiller was announced, the company has bought several well-regarded craft brewers around the country, including California’s Golden Road, Arizona’s Four Peaks, Colorado’s Breckenridge and Virginia’s Devil’s Backbone. These takeovers were preceded by the acquisition of Chicago’s Goose Island, Oregon’s Ten Barrel, Washington’s Elysian and Michigan’s Virtue Cider. A merger between the world’s two largest brewers would give the new global corporation, with an estimated $64 billion in annual revenue and control over an astounding 29 percent of the global beer market, an even greater ability to hobble its competitors, at both the production and distribution levels. The enlarged Anheuser-Busch InBev will have more influence over which brands distributors carry, making it harder for smaller companies to get their products onto store shelves. It will have even more power to strong-arm independent distributors not to carry rival brands and exert pressure on retailers to cut back on, or even refuse to carry, competitive brands. And it will have more resources to buy up smaller breweries as they start to feel squeezed out of the marketplace. As federal antitrust authorities consider the proposed merger, they can establish legal guard rails to preserve competition in the beer industry. For example, in 2013, the Department of Justice prohibited Anheuser-Busch InBev from interfering with independent distributors that sold Modelo brands, the fastest-growing Mexican imported beers in the United States, ensuring that Modelo would remain competitive. Now, in 2016, the least the government could do is issue the same provision for America’s craft brewers. Additionally, the Department of Justice should require Anheuser-Busch InBev to sell off or reduce its share in its distribution network. It should also require the company to modify its anticompetitive incentives to distributors to not deliver other brands of beer. Finally, it could investigate ways to limit the number of additional independent breweries that the company can buy. 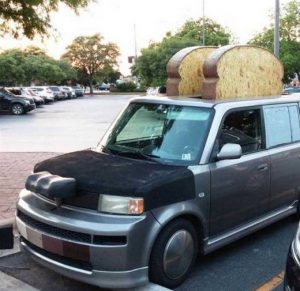 TIME OUT: LEARNING TO SWEAR

A 6 year old and a 4 year old are raking the yard. The 6 year old asks, "You know what? I think it's about time we started learning to swear." The 4 year old nods his head in approval. The 6 year old continues, "When we go in for breakfast, I'm gonna say something with hell and you say something with ass." The 4 year old agrees with enthusiasm. When the mother walks into the kitchen and asks the 6 year old what he wants for breakfast, he replies, "Aw, hell, Mom, I guess I'll have some Cheerios. WHACK! He flies out of his chair, tumbles across the kitchen floor, gets up, and runs upstairs crying his eyes out, with his mother in hot pursuit, slapping his rear with every step. His mom locks him in his room and shouts, "You can stay there until I let you out!" She then comes back downstairs, looks at the 4 year old and asks with a stern voice, "And what do YOU want for breakfast, young man?" "I don't know," he blubbers, "but you can bet your fat ass it won't be Cheerios!"