Our June premium red wine feature is Miguel Torres 5G (Garnacha) from Spain. $7.95 for a glass and $22.95 for a half litre. The white is Yalumba Y Series (Pinot Grigio) from Australia. $8.95 for a glass and $24.95 for a half litre. Our guest tap is currently pouring the highly anticipated return of  Puddle Jumper Rhubarb Cider from Living Sky Winery in Perdue, Saskatchewan. $7.95 for a 12 oz. goblet. Following that we will tap one of the few remaining kegs of the Prairie Sun Meewasin 80 left in the province. A witbier style infused with spruce and pine harvested near Saskatoon. 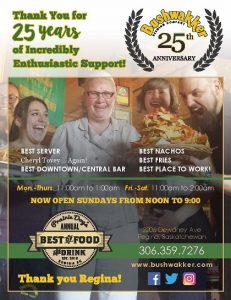 Congratulation to Bushwakker floor manager, Cheryl Tovey, for winning the Best Server: Pub-Lounge category in the 2016 Prairie Dog Best of Food & Drink Reader’s Poll. This is Cheryl’s 7th win. No small feat! Be sure to give Cheryl a high-five next time she brings you your pint. Other Bushwakker first place wins include: Best Downtown-Central Bar, Best Nachos, Best Local Fries and Best Place To Work! Our new menu is now on the tables. This special 25th Bushwakker Anniversary menu edition is full of fresh stories, fresh menu items, more choice and a cleaner look! Let us know what you think at bar@bushwakker.com. “TIE ONE ON” Father’s Day Growler Gift Boxes are now available. Includes your choice of a glass or stainless steel Bushwakker growler, two Bushwakker pint glasses, a growler fill gift certificate and a brand new swanky tie all presented in a handsome gift box. $35 and $60 each. Limited quantities available. WIN TWO TICKETS to our August 4th IPA Day Specialty IPA Tasting Event. Entering this contest is very easy! Just visit https://www.bushwakker.com/wakker-weekly-registration  to sign up to receive our Wakker Weekly newsletter. Never miss out on another Bushwakker announcement or event again! The Bushwakker is now OPEN ON SUNDAYS from Noon to Nine. Enjoy our Sunday Steak & a Pint feature. Lots of folks coming in for growler fills with smiles on their faces! Congratulations to Bushwakker head brewer, Mitch Dalrymple and his brewery staff! The Bushwakker 25 Anniversary Commemorative "Revenge of the Tartan Tzar" won a silver medal in the 2016 Canadian Brewing Awards. Mitch previously won a gold medal with his original Tartan Tzar which was brewed to commemorate our 20th anniversary. Former Bushwakker head brewer, David Rudge, won a gold medal with his Half Pints Brewing St. James Pale Ale. Swift Current's Black Bridge Brewery also won a silver medal with their Milk Stout. Lovin' those award-winning Saskatchewan craft brews! We still have a small number of Revenge of the Tartan Tzar bottles remaining. Hurry down and get a bottle of this national award-winning brew. Once it is gone...it is gone forever!

June 3: FIRST FIRKIN FRIDAY – a Special Sneak Peak edition! Enjoy the pomp and circumstance as a piper from the Regina Police Services Pipes & Drums pipes a small keg of specially created beer throughout the pub. A volunteer is selected to tap the firkin and a suds-soaking display is often the result. Be sure to arrive early to pre-order your pint, get a good seat and taste what Bushwakker head brewer, Mitch Dalrymple, has created this month. All those in attendance will have the opportunity to try his newest fruit beer – Blood Orange Ale! 5:30 PM. June 6: Monday Night Jazz & Blues. THE JAZZ BAND-ITS. The largest band to ever grace the Bushwakker stage. Over 25 musicians play big-band jazz and swing. A feast for the senses! 8:00 PM. June 8: Wednesday Night Folk. ROOM 333 – Acoustic Show. Talented hard rock band proves their versatile song writing skills also work in an acoustic format. 9:00 PM. June 11: Riders vs. Lions. Be sure to stop by the Bushwakker and join the Sea of Green before, during or after the pre-season home game and enjoy our Lion Burger & a Pint special for only $16.95. Think of it as “devouring” the competition. Kick-off is at 7:00 PM. Best of luck in 2016 Riders!!! June 13: Monday Night Jazz & Blues. TERRAPLANE. Shane Reoch's new four-piece band featuring three family members and a Bushwakker bassist. 8:00 PM. June 15: Wednesday Night Folk. THE STILLHOUSE POETS. Prairie-made roots music. Opening set by Brent Nielsen. 9:00 PM. Please note that we will be closed to the public from 5:00 PM - 9:00PM for a private function. June 16: 2016 JAZZFEST REGINA  Bushwakker Performance - BLUE MOON MARQUEE.  7:00 PM. The biggest night of the year for live jazz at The Bushwakker! Blue Moon Marquee is a self-styled gypsy blues band influenced by old delta blues, swing, jazz and ragtime. A.W. Cardinal howls with a smoky vocal while playing a jazz tinged blues guitar. Jasmine Colette commands the upright bass but also keeps the swing with both feet while singing harmonies. Blue Moon Marquee’s passionate performance and smouldering onstage chemistry is their trademark, and the way Colette’s angelic tones lift A.W.’s beaten down “bukowski-esque” mystique is something that enthralls audiences from the back room bar to the public square. Rush seating tickets are $12 advance and $15 at the door.  Available at the Bushwakker and Bach & Beyond. www.bluemoonmarquee.com. June 17: REGINA GLOBE THEATRE 50TH ANNIVERSARY COMMEMORATIVE BEER LAUNCH.  5:30 PM. Although Bushwakker is celebrating a quarter century of service this year we certainly tip our hat to the Globe Theatre who also faced difficult challenges in the early years but has grown into a provincial treasure. After extensive interviews and research into the half century old theatre the Berry Dramatic wheat beer will be released in fine fashion with artistic director, Ruth Smilie, tapping a ceremonial firkin to officially launch the commemorative brew's release. Made with three standout ingredients, local Saskatoon berries, wheat and barley, these key ingredients symbolize the three artistic director teams the Globe Theatre has employed. No small feat! Only 250 bottles of the Berry Dramatic Ale were produced. Be sure to get your keepsake bottle celebrating a true Saskatchewan cultural treasure!

By Bret Thorn   American beer drinkers are drinking less but consuming more craft and imported brews, with total volume declining 2 percent, but with sales rising 21 percent between 2010 and 2015, according to a report by global consumer research firm Mintel. Those gains are largely in craft beer and imports, with market share of most mainstream brands slipping, according to the company’s report, Beer US 2016, released earlier this year. Flavored beer also appears to be a growing category, and accounted for 27 percent of all new beer launches in 2015, rising from 15 percent in 2010. Twenty percent of beer drinkers said they drank flavored beer in 2015, and 58 percent of drinkers of any kind of alcohol, not just beer, said they were interested in trying fruit-flavored beer, according to the report. “Mintel research reveals an explosion of innovation in the flavored beer category,” Mintel food and drink analyst Beth Bloom said in a press release. “The fact that well over half of all U.S. alcohol drinkers say they are interested in flavored beer highlights a significant opportunity to boost participation in the beer category.” Although the most popular descriptors in flavored beer launches were pumpkin, “spice” or “spicy,” coffee and chocolate, they only accounted for 5.3 percent of new beers. The remaining 21.7 percent of beer identified as “flavored” used other descriptors, including fruit varieties such as pineapple and grapefruit. Mintel noted that related to interest in fruit-flavored alcohol, cider consumption grew fivefold between 2010 to 2015, to an estimated 31 million cases. That consumption was driven by Millennials, 23 percent of whom say they enjoy cider, compared with 15 percent of all consumers ages 22 or older. Light beer remains the largest beer category, but its market share is slipping: It was down to 47 percent in 2015, compared with 53 percent in 2010.  Mintel said light beer drinkers’ motivations also seem to be shifting. “‘Light’ may have a stronger appeal for its drinkability rather than as a means to control calories, such as among men and those who drink beer specifically in the pursuit of fun,” the report said. Categories that gained ground in terms of market share were super-premium and premium beer, rising 0.4 percentage points, to 14.7 percent; imported beer, growing 2.5 percentage points to 15.5 percent; and craft beer, which nearly doubled, from 5.2 percent to 10.2 percent. The Brewers Association, which represents craft brewers that produce fewer than 6 million barrels annually, disputes that figure and claims to represent 12 percent of all beer consumption in the country. Regardless of the exact figures, 30 percent of beer drinkers, when asked which kinds of beer they had drunk in the three months before October 2015,  said  they  had  what Mintel  calls  “craft-style”  beer  from national producers, such as Blue Moon or Shock Top, while 23 percent said they had tried “true craft” beer made by smaller producers such as Ommegang and Dogfish Head.  Twenty percent said they had flavored beer. Light beer not only accounts for 47 percent of sales volume, but 47 percent of beer drinkers said they had it in the three months to October 2015. Behind light beer, imported beer is the most popular category, with 44 percent saying they had it, compared with 40 percent who said they had domestic beer.  Mintel noted that Mexican brands Corona and Modelo saw particular growth in the year ending Oct. 4, 2015, with sales rising 8 percent and 23 percent, respectively. Mintel concluded that a shift is underway in what Americans are drinking.  Although sales volumes were down slightly, it said “growth areas such as craft, imports, and flavored offerings suggest opportunity as beer competes with other alcoholic beverages for attention.” 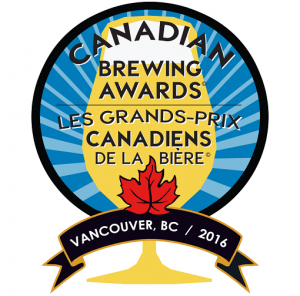 A woman was having a medical problem - her husband`s snoring. So she called the plastic surgeon one morning, and asked him if there was anything he could do to relieve her suffering. "Well, there is one operation I can perform that will cure your husband, but it is really rather expensive. It will cost $5,000 down, and payments of $850 for 24 months, plus payments for extras". "My goodness!" the woman exclaimed "That sounds like leasing a new sports car!" "Hmm" the surgeon murmured "that obvious, huh?"