Our May premium wine features are both VQA wines from British Columbia. The red is Conviction Dreamers & Schemers (Merlot/Cabernet Franc) and the white is Conviction Movers & Shakers (Gewurztraminer/Sovereign Opal.) Both are $7.95 for a glass and $22.95 for a half litre. Our guest tap is currently pouring the hoppiest offering ever to come from Prairie Sun Brewing in Saskatoon. Their Mad Hopper IPA makes its Bushwakker debut. 75 IBU. $7.95 for a pint. Next up we will tap a brand new seasonal offering from Nokomis Craft Ales, a Smoked Amber Ale. Following that we have a new Imperial Stout from Black Bridge Brewery in Swift Current. The Bushwakker is now OPEN ON SUNDAYS from Noon to Nine. Enjoy our Sunday Steak & a Pint feature. Lots of folks coming in for growler fills with smiles on their faces! We’re even seeing some private room bookings too. Hmmm…looks like our Sunday openings were long overdue! Your Bushwakker has been the recipient of many very positive reviews on TripAdvisor in recent months. Consequently we are now number 4 out of 434 in consumer preferences for Regina. We take the opportunity to thank all those reviewers who have brought us to this level, and, of course, for those who have not reviewed us yet, we can never see too many positive reviews.

Bev Robertson, Bushwakker Brewpub president Are you one of those people, like me, that prefer dark chicken and turkey meat and wishes that restaurants would want our business? Polls show that roughly half of any population say they prefer white chicken meat, about 30% prefer dark and 20% have no preference. However, and for whatever reason, at least 75% of my family and the people I know socially seem to prefer dark meat. Some of those who prefer white meat just don’t like the flavour of dark meat.  Many people make their preference white meat because of an assumption that white meat is healthier. Indeed, white meat has less fat and cholesterol, which is associated with the reason some of us prefer the flavour of dark meat. The difference is not large but for people who eat only chicken this could become important. White meat is almost pure protein. Dark meat contains protein but it also contains many ingredients essential to health, such as vitamins, riboflavin and niacin, amino acids and various trace elements such as iron, all of which are needed by the body. So which is more healthy for you will depend on your own particularly body chemistry and eating habits. But restaurants consistently cater to the 70% who only eat white meat or who will eat white meat and make it clear to the remaining 30% that we should go suck a lemon. I should add that I have found white meat dishes that I liked in some restaurants, such as a walnut-crusted breast in a capers and baby shrimp sauce, cooked perfectly to be still juicy and tender. There are some subtle reasons beyond a lack of awareness of our needs that mitigate against serving dark meat. For instance, dark meat, thigh or leg, usually comes with a bone, and meat with a bone takes too long to cook for restaurant use, and if partially cooked and then finished when ordered, would lose moistness. The Bushwakker is entering into an experiment. How many other dark meat eaters are out there who feel frustrated by not being able to order chicken dishes in any restaurant. Our Ciabatta Chi-Chi and our Greek Chicken Wrap are now offered with a choice of dark or white meat. The dark meat will be from skinless and boneless thigh pieces. So then, if you prefer dark meat and are frustrated that restaurants ignore you, this is your chance to make a point, by ordering our Ciabatta Chi-Chi or our Greek Chicken Wrap with the dark meat choice. If sales don’t support the extra cost of offering a choice, that choice will disappear. If, on the other hand, demand is strong you will see it expanded to other Bushwakker chicken menu items.

May 6: FIRST FIRKIN FRIDAY. Enjoy this popular and longstanding Bushwakker tradition. A small keg of specially created beer is paraded throughout the brewpub lead by a piper from the Regina Police Services Pipes and Drums. A volunteer tapper is selected to wield the handmade wooden maul affectionately named, “The Mighty Firkin Wakker” and attempt to tap the firkin in one mighty blow. Squirting suds and screams of delight/horror often follow as many folks in the immediate vicinity receive a beer shower. Although our last few tappings have been very clean and little beer has been lost. Don’t miss this month’s tapping edition at 5:30 PM. May 7: BIG BREW DAY. The ALES Club and the Bushwakker Brewpub continue this longstanding tradition of celebrating craft beer. Members of the club join Bushwakker head brewer, Mitch Dalrymple, in brewing a special beer in which they have worked collaboratively. May 9: Monday Night Jazz & Blues. LITTLE CHICAGO. Veteran bluesman, Ray Eberle, leads this powerful blues trio. 8:00 PM. May 11: Wednesday Night Folk. THE RYAN HICKS TRIO. Ryan brings the sunshine with a fun blend of covers and songs from his debut album, "Prairie Ocean." 9:00 PM. May 16: Monday Night Jazz & Blues. WHITEBOY SLIM. Veteran blues musician combines traditional and current sounds to create genuinely modern music. 8:00 PM. May 18: Wednesday Night Folk Night – Special Edition. KATIE MILLER. Saskatchewan singer songwriter Katie Miller will be throwing a CD Release Party at tonight’s show for her newly released contemporary folk-rock album, “A New Day.” 9:00 PM. 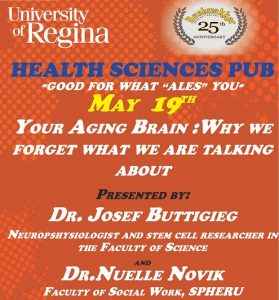 May 19: HEALTH SCIENCES PUB: GOOD FOR WHAT “ALES” YOU! The second presentation from a group of health science researchers at the University of Regina. Join us in the Bushwakker Arizona Room at 7:00 PM. Only 50 seats will be made available. No cover charge. The room opens at 5:00 PM so come down early in order to get a good seat and perhaps a meal before the presentation. This month's lecture is entitled, Your Aging Brain: Why We Forget What We Are Talking About. Ever wonder why we tend to forget as get older?  We often brush it off, not realizing the implications this can have on our daily health and everyday lives. In this talk Dr. Buttigieg and Dr. Novik discuss their research on the aging brain and implications from both the basic biomedical perspective and the social health perspective. Dr. Buttigieg is a neurophysiologist at the U of R. As a researcher, he is interested in what happens when the brain is damaged (eg. stroke and traumatic brain injury) and how we can use stem cells to repair the damage. Various diseases such as stroke initiate a series of events that eventually lead to cognitive impairment. What's even more scary is that most people don't realize they even had a stroke. Dr. Novik is with the Faculty of Social Work at the U of R, and is a member of Saskatchewan Population Health and Evaluation Research Unit (SPHERU). This large SPHERU research team includes researchers from both U of R and U of S. Dr. Novik will discuss findings from an extensive team research program focusing upon rural healthy aging in place. In addition, she will discuss the results of her own research with older adults which specifically examines the impacts of social isolation on both the cognitive health and mental health of seniors. May 21: THE POET LAUREATE’S POETRY & A PINT PRESENTATION. The Saskatchewan Poet Laureate Program was the first provincial program of its kind in Canada. The Saskatchewan Arts Board, Saskatchewan Book Awards, and the Saskatchewan Writers’ Guild are partners in the program, which is under the patronage of the Lieutenant Governor, Her Honour the Honourable Vaughn Solomon Schofield. Enjoy a Saturday afternoon of poetry readings from some of Regina and area’s established and up-and-coming writers including: Eric Greenway, Shelley Banks, Courtney Bates-Hardy, Brenda Niskala and Coby Stephenson. Hosted by Gerald Hill, Poet Laureate of Saskatchewan. 3:00 PM – 4:00 PM. I  f you have ever wished you could enjoy a pint of Bushwakker beer while visiting an art gallery, your wish has finally come true, but only for a limited time. We see many similar objectives behind why this art installation (see below) was created and why your Bushwakker was opened over a quarter century ago.

The Candahar Seeks to Reconcile our Differences as Art Simulating Pub

Ashley Martin – Regina Leader Post Standing at The Candahar’s bar feels like being in any neighbourhood pub. Bottles of Jameson flank a mirror reflecting two beer taps, above which there’s a clock always set at 3:05. Walls display artwork, black-and-white snapshots, newspaper articles. Coasters with the pub’s name scatter across the pub’s two lonely tables. An ancient TV streams 1990s horseraces. But you enter the pub not through a door — two lush burgundy curtains mark the way in. Outside The Candahar, instead of a brick facade, there are two-by-fours and plywood, and a few cables feeding electricity. The Candahar is not a real pub. It’s a sculpture by Winnipeg artist Theo Sims, currently installed at the MacKenzie Art Gallery. He began its construction in 2004, while living in Saskatoon, and it has been rebuilt several times since. “People can kind of lose themselves a little bit when they come in here, they forget they’re in an art gallery, they forget they’re in an art installation. And then there’s a surreal fourth-wall moment when they leave and go ‘what the hell was that?’” said Sims. The  Candahar is  more  than  a  tribute  to  some of  Northern  Ireland’s  finest taverns — primarily  The  Blackthorn,  with  smatterings  of   The Garrick   and  The Kitchen. It has a deeper meaning. While attending university in Belfast in the 1990s, people made assumptions about Sims as an Englishman during The Troubles. He found the neighbourhood pub was a place to sort out their differences. “Once we talked things through, we started understanding that there’s a lot of things we had in common,” he said. This art piece, named after a Belfast street where artists flocked, is formed on the basis of that conversation. “It’s that spirit of asking directly and not assuming … Speak to  them  and  have a conversation,” said Sims. “I hope that people come in and question ‘What is a Belfast bar?’ or ‘What is it to be from the north of Ireland?’ or ‘What is it to be a Canadian with ancestry?’ ” added Sims. “In some ways (a pub) can be a neutral zone for people of different backgrounds … so it is a place where people can engage with one another hopefully on a little bit more comfortable level,” said Michelle LaVallee, who curated the exhibition for the MacKenzie. “We’re here in Canada, so what does that mean? What kind of assumptions do people make about one another here, people from elsewhere?” added LaVallee. “I’m hoping these types of dialogues and questions will be brought out by the piece.” The Candahar is also about building community. Every Thursday evening through Sept. 1, The Candahar will have guest hosts, including local artists, guiding conversation. Bushwakker beer will be on tap! 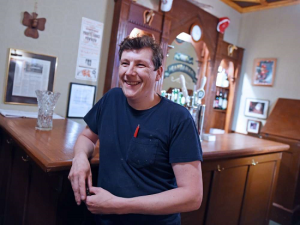 Theo Sims stands inside The Candahar, his sculptural re-creation of a Belfast pub which is serving Bushwakker beer, at the MacKenzie Art Gallery

MacGregor walks into a barber shop and demands a straight razor shave and a shoeshine.  The barber lathers him up and begins to give him a shave. The most beautiful woman he has seen in a while walks up and starts his shoeshine. MacGregor said, "Young lady, you and I should go spend some time in a hotel room." She replied, "I'm married and my husband wouldn't like that." MacGregor says, "Tell him you're working overtime and I'll pay you the difference." She said, "You tell him; you're closer."