Our May premium wine features are both VQA wines from British Columbia. The red is Conviction Dreamers & Schemers (Merlot/Cabernet Franc) and the white is Conviction Movers & Shakers (Gewurztraminer/Sovereign Opal.) Both are $7.95 for a glass and $22.95 for a half litre. Our guest tap is currently pouring the hoppiest offering ever to come from Prairie Sun Brewing in Saskatoon. Their Mad Hopper IPA makes its Bushwakker debut. 75 IBU. $7.95 for a pint. Next up we will tap a brand new seasonal offering from Nokomis Craft Ales, a Smoked Amber Ale. Congratulations to Darren Weir! He won the contest we conducted on our facebook page last Saturday and won four tickets to see RAIN – A Tribute to The Beatles which was held at the Conexus Arts Centre last Tuesday night. The Bushwakker does have somewhat of a connection with The Fab Four. Our contest question was, Name the artist who has performed at the Bushwakker on more than one occasion who are also noted for having been the house band for George Harrison’s parties. The correct answer of course is the Robin Nolan Trio from Amsterdam. The trio has played Jazz Festival shows at The Bushwakker on numerous occasions and have developed quite the local following. Robin is one of the world's most respected exponents of Gypsy Jazz guitar since Django Reinhardt. Although Robin will not be appearing this year at the Bushwakker as part of the JazzFest Regina festival, we are very excited to present a western Canadian act of a similar genre in this year’s festival on Thursday, June 16. Blue Moon Marquee is a self-styled gypsy blues band influenced by old delta blues, swing, jazz and ragtime. A.W. Cardinal howls with a smoky vocal while playing a jazz tinged blues guitar. Jasmine Colette commands the upright bass but also keeps the swing with both feet while singing harmonies. Blue Moon Marquee's passionate performances and smouldering onstage chemistry is their trademark, and the way Colette's angelic tones lift A.W.'s beaten down "bukowski-esque" mystique is something that enthralls audiences from the back room bar to the public square. Advance tickets are $12 and are on sale now at The Bushwakker and at Bach & Beyond. 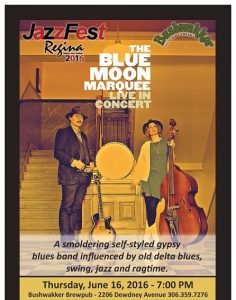 BEGINNING THIS WEEKEND! The Bushwakker will be OPEN ON SUNDAYS from Noon to Nine starting May 1st. We first tried Sunday openings over 20 years ago but didn't see the market demand required to justify being open seven days a week. Given the considerable growth of the city, ongoing commercial and residential development within the warehouse district, the recent openings of two hotels in our area, and your very enthusiastic feedback, we thought it is time to revisit Sunday openings once again. Given the number of Sunday private room bookings we have received already, it would appear there are a great many of you who will be stopping by for Steak & a Pint Sundays!

May 1: NOW OPEN EVERY SUNDAY from Noon until 9:00 PM. Enjoy our Sunday Steak & a Pint feature. May 2: Monday Night Jazz & Blues. AZ PARIS. Veteran bluesman leads this traditional blues act. 8:00 PM. May 4: Wednesday Night Folk. WINONA WILD. BC Musician Magazine’s songwriter of the year on a cross Canada tour plays sultry alt-country blues. 9:00 PM. May 4: MONTHLY ALES MEETING. After hosting a huge and very successful national homebrewing competition, the ALES Club return to regular programming. This month’s presentation topics include: Rauchbier (smoked); Smoking grains and Making Belgian Candy Syrup. If you are interested in getting into the art of homebrewing or improving your skills, the ALES Club is for you. Meetings are held on the first Wednesday of the month in the Bushwakker basement clubroom at 8:00 PM. New members are always welcome. May 6: FIRST FIRKIN FRIDAY. Enjoy this popular and longstanding Bushwakker tradition. A small keg of specially created beer is paraded throughout the brewpub lead by a piper from the Regina Police Services Pipes and Drums. A volunteer tapper is selected to wield the handmade wooden maul affectionately named, “The Mighty Firkin Wakker” and attempt the tap the firkin in one mighty blow. Squirting suds and screams of delight/horror often follow as many folks in the immediate vicinity receive a beer shower. Although our last few tappings have been very clean and little beer has been lost. Don’t miss this month’s tapping edition at 5:30 PM. May 7: BIG BREW DAY. The ALES Club and the Bushwakker Brewpub continue this longstanding tradition of celebrating craft beer. Members of the club join Bushwakker head brewer, Mitch Dalrymple, in brewing a special beer in which they have worked collaboratively. May 9: Monday Night Jazz & Blues. LITTLE CHICAGO. Veteran bluesman, Ray Eberle, leads this powerful blues trio. 8:00 PM. May 11: Wednesday Night Folk. THE RYAN HICKS TRIO. Ryan brings the sunshine with a fun blend of covers and songs from his debut album, "Prairie Ocean." 9:00 PM. May 16: Monday Night Jazz & Blues. WHITEBOY SLIM. Veteran blues musician combines traditional and current sounds to create genuinely modern music. 8:00 PM. May 18: Wednesday Night Folk Night – Special Edition. KATIE MILLER. Saskatchewan singer songwriter Katie Miller will be throwing a CD Release Party at tonight’s show for her newly released contemporary folk-rock album, “A New Day.” 9:00 PM. May 19: HEALTH SCIENCES PUB: GOOD FOR WHAT “ALES” YOU! The second presen  tation from a group of health science researchers at the University of Regina. Join us in the Bushwakker Arizona Room at 7:00 PM. Only 50 seats will be made available. No cover charge. The room opens at 5:00 PM so come down early in order to get a good seat and perhaps a meal before the presentation. This month's lecture is entitled, Your Aging Brain: Why We Forget What We Are Talking About. Ever wonder why we tend to forget as we get older?  We often brush it off, not realizing the implications this can have on our daily health and everyday lives. In this talk Dr. Buttigieg and Dr. Novik discuss their research on the aging brain and implications from both the basic biomedical perspective and the social health perspective. Dr. Buttigieg is a neurophysiologist at the U of R. As a researcher, he is interested in what happens when the brain is damaged (eg. stroke and traumatic brain injury) and how we can use stem cells to repair the damage. In various diseases such as stroke, this sets off a series of events that eventually leads to cognitive impairment. What's even more scary is that most people don't realize they even had a stroke. Dr. Novik is with the Faculty of Social Work at the U of R, and is a member of Saskatchewan Population Health and Evaluation Research Unit (SPHERU). This large SPHERU research team includes researchers from both U of R and U of S. Dr. Novik will discuss findings from an extensive team research program focusing upon rural healthy aging in place. In addition, she will discuss the results of her own research with older adults which specifically examines the impacts of social isolation on both the cognitive health and mental health of seniors. May 21: THE POET LAUREATE’S POETRY & A PINT PRESENTATION. The Saskatchewan Poet Laureate Program was the first provincial program of its kind in Canada. The Saskatchewan Arts Board, Saskatchewan Book Awards, and the Saskatchewan Writers’ Guild are partners in the program, which is under the patronage of the Lieutenant Governor, Her Honour the Honourable Vaughn Solomon Schofield. Enjoy a Saturday afternoon of poetry readings from some of Regina and area’s established and up-and-coming writers including: Eric Greenway, Shelley Banks, Courtney Bates-Hardy, Brenda Niskala and Coby Stephenson. Hosted by Gerald Hill, Poet Laureate of Saskatchewan. 3:00 PM – 4:00 PM.

Homebrewers Across the U.S. Unite for AHA Big Brew on May 7

In honor of National Homebrew Day (which falls every year on May 7), each year the American Homebrewers Association (AHA) celebrates AHA Big Brew on the first Saturday in May. And guess what? This year, May 7 is a Saturday! Throughout the day, hundreds of bars, breweries, shops and homebrew clubs nationwide will host their local communities to brew on-site for a national, same-day homebrewing session. At noon CDT, all homebrewers and beer lovers are encouraged to raise a glass of homebrew in a simultaneous toast to homebrewing, a hobby enjoyed by thousands of people all over the world. A number of suggested recipes are selected for participants to follow. This year’s recipes celebrate the 500th anniversary of the Reinheitsgebot—commonly referred to as the “German Beer Purity Law”—which went into effect in Bavaria in 1516 and allowed brewers to use only three ingredients in their beer: water, hops and barley. Full recipe details and directions can be found online. Where can one participate? Everywhere! From homebrewers’ homes and backyards, to the shops that provide the ingredients and supplies, to local breweries and craft beer bars worldwide. View an interactive map of AHA Big Brew event locations across the country. Register your local AHA Big Brew event and join the conversation on Twitter with #BigBrew16. Why should one participate? There are more than 1.2 million homebrewers in the United States. With one in every 200 adults in the U.S. now crafting their own beer, homebrewing has become one of the country’s fastest growing hobbies. AHA Big Brew is a toast to the nation’s homebrewers and their shared love and appreciation for homebrewed beer, mead and cider. In 2015 over  11,000   people  celebrated  the  AHA  National  Homebrew  Day  at  484, registered sites. Additionally, 2,722 batches created 19,631 gallons of homebrew enjoyed around the world. Last year, 50 U.S. states and 14 countries participated. About the American Homebrewers Association: The American Homebrewers Association has worked on behalf of the homebrewing community since 1978 and celebrates a membership of more than 46,000 homebrewers. The American Homebrewers Association (AHA) organizes events including Homebrew Con and the National Homebrew Competition. The AHA also publishes Zymurgy magazine. The AHA is part of the Brewers Association, whose Brewers Publications division is the largest publisher of contemporary and relevant brewing literature for today’s craft brewers and homebrewers. Beer lovers and anyone interested in making their own homemade beer are invited to learn more at HomebrewersAssociation.org. Follow the AHA on Twitter, and join us on Facebook and Instagram. The Bushwakker Brewpub and the ALES Club have a long history together involving Big Brew Day which began more than a decade ago. Over 30 members of the ALES Club traditionally meet Bushwakker head brewer, Mitch Dalrymple, in the Bushwakker brewery at 6:00 AM. They have already worked with him in developing the recipe design and will assist in mashing in, removing spent grain and possibly be involved in the various timed hop additions. Some very interesting beers have been brewed on Big Brew Day at The Bushwakker such as an Imperial Stout, Imperial Black IPA and even an Old Ale. This year will be no exception as a Roggenbier is the proposed 2016 BBD beer. Big Brew Day is really about experimentation and pushing the edges of what craft beer can be. 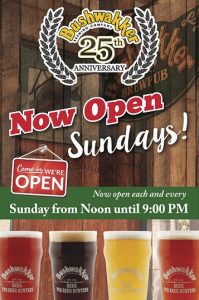 Jones sold more GI Insurance than any other recruiter.  Curious, his Sergeant watched his next meeting with a new recruit.  Jones explained the basics of the GI Insurance to the new recruits, and then said:  "If you have GI Insurance and go into battle and are killed, the government has to pay $200,000 to your beneficiaries.  If you don't have GI insurance, and you go into battle and get killed, the government only has to pay a maximum of $6000". "Now" he concluded "which group do you think they are going to send into battle first?"