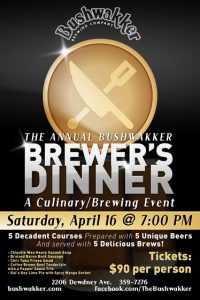 Mar. 25: Open at 11:00 AM on Good Friday. Mar. 28: Monday Night Jazz & Blues. 'ROUND MIDNIGHT. Popular act plays popular jazz & adult contemporary tunes. 8:00 PM. Mar. 30: Wednesday Night Folk. RON LOOS. Veteran singer/songwriter/funnyman and acoustic guitar plucker is back to showcase his razor-sharp wit and heartfelt lyrical prowess. 9:00 PM. Apr. 1: FIRST FIRKIN FRIDAY. The longstanding Bushwakker tradition continues! Enjoy the pomp and circumstance as a small keg of specially created beer (the firkin) is paraded throughout the pub lead by a piper from the Regina Police Services Pipes & Drums. A volunteer is selected to tap the firkin and generally all those in the immediate vicinity receive a suds soaking experience. But every once in a while we witness a perfect tapping where not a drop is spilled as was our most recent tapping experience. You just never know how the tapping will go! 5:30 PM. Apr. 4: Monday Night Jazz & Blues. CALL ME MILDY. Original, alternative, rockin’ blues act. Check out their video at https://youtu.be/InqgH0sM-qo. 8:00 PM. Apr. 6: Wednesday Night Folk. BRADFORD. Talented guitar/vocal duo comprised of veteran Regina musicians, Brad Papp and Mark Radford. Opening act, Holly Noir. 9:00 PM. Apr. 6: MONTHLY ALES MEETING. April is one of the biggest months of the year for the ALES homebrewing club. They host the annual ALES Open home brewing competition and received hundreds and hundreds of entries from across the entire country. The club takes over our basement clubroom from April 11 – 16 and beers are evaluated throughout the week due to the efforts of a large contingent of volunteer stewards and beer judges. It is a massive undertaking but they do a fine job and have earned the reputation of hosting one of the best amateur homebrewing competitions in Canada. At their April 6th meeting they will address a variety of topics including: Saison, Making Yeast Starters and Washing Adding Flavours, Tinctures Spices and Fruits. The meeting starts at 8:00 PM in the Bushwakker basement clubroom. New members are always welcome. Apr. 11: Monday Night Jazz & Blues. TERRAPLANE. Regina’s friendliest bluesman, Shane Reoch, bring his full band to the Bushwakker. 8:00 PM. Apr. 13: Wednesday Night Folk. REDBEARD’S RUMBUSTER KEGGER BIRTHDAY BASH. Regina’s #1 live music ambassador, Jeff “Redbeard” Corbett of 91.3 FM CJTR Regina Community Radio, is celebrating his birthday and the whole city is invited to partake in some of his favourite things; live music, Redbeard’s famous Double Chocolate Cheesecake and a firkin of rum-infused beer! The evening kicks off with the tapping of a delicious firkin of English Harbour 5 Year Old Caribbean Rum infused Sodbuster Brown Ale at 7:30. We are starting the music early at 8:00 PM. Enjoy live performances from Keiffer McLean, Mark Radford, Ben Winoski & Jeff Storry, and Lexi Desjarlais. Apr. 16: ANNUAL BUSHWAKKER BREWER’S DINNER. 7:00 PM. Tickets $90. On sale now! See complete menu above.

Craft beer is now drowning in brands and products

By Jason Notte   Mar 14, 2016 We may not be at “peak beer” or even close to it, but it’s getting a lot more crowded in the beer marketplace than it’s ever been. If you don’t know what a beer stock keeping unit (SKU) is by name, you certainly know the various cases, kegs, bombers, six-packs, four-packs, bottles, cans and brands that comprise them. We’ve heard craft beer brewers weigh in on them, but to get to the heart of what’s going on, you have to talk to the beer industry’s unsung heroes: the people who’ll spend more time poring over the numbers than they will pouring pints. We’re talking about the economists and statisticians. Bump Williams Consulting has made a living providing analytics to the beer, wine and spirits industries since 2008. In that time, it’s watched the number of beer SKUs rise from 4,843 to 11,833. Craft beer SKUs alone have soared from 2,274 in 2008 to a whopping 7,400 last year, more than tripling the amount of products that the industry sent into the marketplace. Bart Watson, chief economist for the Brewers Association craft beer industry group, thinks that the inflated craft number may be an underestimate. He notes that seasonal offerings often share a SKU number, which means a brewery could fit as many as four beers under the same SKU. He also notes that some breweries have multiple products under the same SKU. 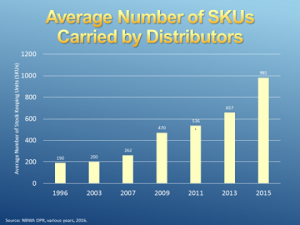 National Beer Wholesalers Association’s 2015 Distributor Productivity Report Meanwhile, it’s starting to tax the people who have to bring that beer to retailers.  Independent  beer distributors  were carrying an average of just  262 SKUs in 2007, according to the National Beer Wholesalers Association’s 2015 Distributor Productivity Report. Just last year, those same distributors were dealing with an average of 981, with a reported range between 600 to more than 1,600. They’re also dealing with an average of 35 breweries, compared with just nine two decades ago. “The beer industry is focused on providing beers that consumers want, while being mindful of the complexities that wholesalers and retailers face as more beer choices abound,” says James McGreevy, chief executive of Washington, D.C.-based industry trade group The Beer Institute. “As consumer tastes and preferences in beer evolve, the industry is meeting that demand by presenting more choices in packaging, styles and flavors.” The burden of that increased SKU count isn’t just on distributors and stores. While the beer industry’s SKU count has increased 244% since 2008, total U.S. beer output has actually dropped 3.3% during that same span — from 213.3 million barrels to 206.3 million. While it’s true that craft beer’s production has nearly tripled in that time — from 8.4 million barrels to 22.2 million in 2014 — and its brewery count has soared from 1,500 to more than 4,000, there’s a catch. According to data from IRI, a Chicago-based market research firm, 48.85% of all craft beer sales came from the top 10 brands alone: Samuel Adams, Sierra Nevada, New Belgium, Shiner, Lagunitas, Small Town (Not Your Father’s brands), Deschutes, Stone, Goose Island and Bells. A whopping 62% come from the top 20. While a few of IRI’s top 20 wouldn’t fit under the Brewer’s Association’s definition of a craft brewer, BA’s Watson didn’t argue the point. In fact, he noted that “regional breweries” — which the Brewers Association says can produce up to 6 million barrels — produced roughly 79% of craft beer’s total volume in 2014, when they comprised just 135 of craft’s 3,418 breweries. “I certainly think that the 80-20 rule still applies, where there’s a small number of SKUs that make up the vast majority of volume,” he says. “There are only 150 to 160 regionals, maybe a few more this year, and they’re producing the vast majority of volume, so their SKUs will be driving the majority of the volume. The flip side of that is when you look into the SKUs off-premise; the vast majority of those are pretty small and, while they do add up to a lot of volume when you put them all together, in their home markets they’re still small brands.” Overall, that isn’t such a bad thing. Despite all of the (OK, our) fretting about an impending #SKUpocalypse, Watson notes that SKUs from smaller brewers tend to be more locally focused, which dovetails nicely with beer drinkers’ interests. As Nielsen noted last year, 56% of beer drinkers think of “craft” as small and local. On top of that, while just 45% of beer drinkers think it’s important that their beer is brewed locally, 53% of drinkers ages 21 to 34 think so. Among craft beer drinkers, that sentiment resonates with 52% of all drinkers and 55% of younger drinkers. READ MORE Asst. editor’s note: It may be interesting to our readers that the SLGA currently has 572 beer SKUs; many of which are products from the large industrial brewers.

A man goes to the doctor and says: "Doctor, there's a piece of lettuce sticking out of my bottom". The doctor asks him to drop his trousers and examines him. The man asks: "Is it serious, doctor?" and the doctor replies: "I'm sorry to tell you, but this is just the tip of the iceberg".