Our premium red wine feature for March is Mazzaro Intensita (nero d'avola/nerello mascalese/cabernet sauvignon/merlot) from Sicily, Italy; $8.95 for a glass and $24.95 for a half litre. The white is Michel Torino Cuma Torrentes (certified organic) from Argentina; $6.95 for a glass and $28.95 for a half litre. Our guest tap is currently pouring Imperial Coconut Porter from Rebellion Brewing in Regina; $8.95 for a pint. Next up is a new offering from the Black Bridge Brewery in Swift Current, their Black Rye IPA.  Bushwakker head brewer, Mitch Dalrymple is pleased to announce that the first Bushwakker Hop Torpedo beer is now on tap. The Hop Torpedo is a cylindrical shaped device which is filled with hop cones. Beer is then circulated through the hop torpedo in the aging cellar for at least day or two. The use of the Hop Torpedo will enhance hop aroma and complexity without increased hop bitterness. Our Chico IPA is our first Hop Torpedo offering. Mitch is eager to hear your feedback; good, bad or indifferent. Please send your comments to him at beer@bushwakker.com. Tickets to our Saturday, April 16 Bushwakker Brewer’s Dinner go on sale Friday, March 18 at 11:00 AM. There will be 120 tickets available and will cost $90 each. This is the signature event of The Bushwakker Brewpub. Typically it sells out in just a few days. Don’t miss this annual event where the talents of our kitchen and brewery staff come together to present something very special. Enjoy a five course meal where each course incorporates beer as an ingredient and each course is served with a unique beer to enhance the flavours of the food. This year’s menu has an added twist; the theme will focus on peppers! Truly one of Regina’s most decadent dining experiences.

Mar. 21: Monday Night Jazz & Blues. THE JAZZ BAND-ITS. The biggest band to ever grace the Bushwakker stage. Over 20 members play big band jazz and swing. 8:00 PM. Mar. 23: Wednesday Night Folk. THE HUMDINGERS. Veteran Regina musician, Dave Kapp, makes the Bushwakker debut of his latest act featuring three mature gents playing some extremely melancholy country! 9:00 PM. Mar. 24: Science Pub – edition #30: Banning Bananas From the Great Lakes and Other Great Ideas - Some New Ideas on Communicating About Nuclear Power that Might Help it Save the World! Presented by the University of Regina Faculty of Science and The Bushwakker Brewpub. Our wildly popular monthly Science Pub Series has returned after a ten month hiatus. Things will start off slowly but will potentially develop so that a larger segment of the university will be involved to make the revitalized Science Pub even bigger and better! Enjoy lectures on scientific topics of general interest in our Arizona Room (main floor banquet room) over beer and snacks. The room opens at 5:00 PM and quite often is full by 6:00 PM. Avoid disappointment and come down early for dinner and a pint before the presentation which begins at 7:00 PM. This month's lecture will be presented by Dr. Neil Alexander, Executive Director at the Sylvia Fedoruk Canadian Centre for Nuclear Innovation in Saskatoon. This lecture discusses how nuclear energy could be making a huge contribution to the battle with climate change but presently no one seems to want to talk about it.  Neil will wade fearlessly into these tempestuous waters to suggest some ideas on how the industry managed to achieve this bizarre situation and what it might do to change it.  On the journey we may learn more than we want to about bananas, something about the contents of Neil’s fridge and of the social ineptitude of young metallurgists. Some of these things may have relevance to the theme. 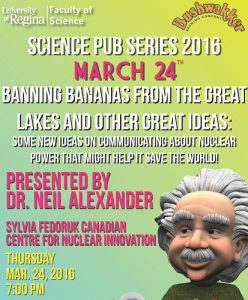 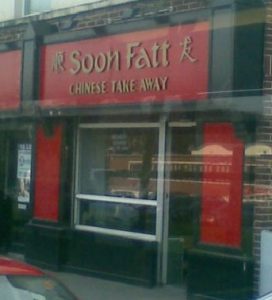 The traffic signal turned yellow, just in front of him. He did the right thing by stopping at the crosswalk, even though he could have beaten the red light by accelerating through the intersection. The tailgating woman behind him was furious, and she honked her horn and screamed in frustration as she missed her chance to get through the intersection, dropping her cell phone and her makeup. As she was still ranting, she heard a tap on her window and looked up into the face of a police officer who told her to exit her car with her hands up. Then he took her to the local police station where she was searched, fingerprinted, photographed and placed in a holding cell. After a couple of hours, a policeman approached her cell and opened the door. She was escorted back to the booking desk where the arresting officer was waiting with her personal effects. He said "I'm very sorry for this mistake. You see, I pulled up behind your car while you were blowing your horn, flipping off the guy in front of you and cussing a blue streak. I noticed the 'What Would Jesus Do' bumper sticker, the 'Choose Life' license plate holder, the 'Follow Me To Sunday-School' bumper sticker and the Christian fish emblem on the trunk, so naturally I assumed that you had stolen the car".