Our premium red wine feature for March is Mazzaro Intensita (nero d'avola/nerello mascalese/cabernet sauvignon/merlot) from Sicily, Italy. $8.95 for a glass and $24.95 for a half litre. The white is Michel Torino Cuma Torrentes (certified organic) from Argentina. $6.95 for a glass and $28.95 for a half litre. Our guest tap is currently pouring Brettish Monkeys Russian Imperial Stout from the Paddock Wood Brewery in Saskatoon. Next up is a Black IPA from Nokomis Craft Ales in Nokomis, Saskatchewan. Movie director and actor Kevin Smith (Silent Bob) was in Regina last week scouting locations for his upcoming movie entitled Moose Jaws. Smith, who directed Clerks, Dogma and a number of other films, says he plans to begin shooting his new film in July. After a day of scouting he stopped by The Bushwakker with Craig Lederhouse and a few other folks from Creative Saskatchewan to soak up some Saskatchewan culture. Brett Butt, William Shatner, Kevin Smith…who will visit us next?

Actor and director, Kevin Smith, recently paid a visit to The Bushwakker

Mar. 4: FIRST FIRKIN FRIDAY. Enjoy the pomp and circumstance of this long-standing monthly Bushwakker tradition where on the first Friday of each month at 5:30 PM, a piper from the Regina Police Services Pipes & Drums leads a small keg (the firkin) of specially created ale throughout the pub. A volunteer is selected to wield the handmade wooden maul affectionately called, The Mighty Firkin Wakker, and tap the keg in one swift blow. The volunteer and all those in the immediately proximity often receive a suds-soaking experience. This month’s special offering is another first for the Bushwakker brewery. A First Firkin Friday offering of a lager rather than an ale. Bushwakker head brewer, Mitch Darymple, has created a firkin of Saaz dry-hopped Bushvar Czech Pilsener. The noble Saaz hops should enhance the earthy, herbal and spicy aroma character. View some of our most explosive and memorable firkin tappings set to Tchaikovsky’s 1812 Overture in our “Firkin Compilation” video found on our website homepage. Mar. 7: Monday Night Jazz & Blues. THE U OF R JAZZ BAND. Come hear Regina’s future jazz stars! 8:00 PM. Mar. 9: Wednesday Night Folk. THE STILLHOUSE POETS with special guest opening act, Kara Golemba. 9:00 PM. Mar. 14: Monday Night Jazz & Blues. WHITEBOY SLIM. National award-winning bluesman returns. 8:00 PM. Mar. 16: Wednesday Night Folk. BILLARNEY. A pre-St. Patrick's Day performance from this very large acoustic Celtic group. 9:00 PM. Mar. 17: BUSHWAKKER ST. PATRICK’S DAY PARTY. Traditionally one of the biggest days of the year for pubs all around the world and The Bushwakker is no exception. Enjoy our Irish food features available all day and night including: Traditional Colcannon Cakes, Smoked Salmon Soda Bread Sandwich, Irish Potato & Leek Soup and Irish Cream Panna Cotta with Espresso Caramel. Plenty of Irish drinks including: Guinness Stout, our Green Shamrock Ale and Dungarvon Irish Red Ale, Jameson Select Reserve Small Batch Whiskey and Magner's Apple and Pear Irish ciders. The evening kicks off with tapping of a firkin of our extremely popular Irish Coffee Stout at 6:00 PM. Entertainment from the Regina Police Pipes & Drums, The Prairie Gael School of Irish Dance and newly revitalized Celtic act, Squeeze of Scotch. The band will introduce Bushwakker to their new fiddle player, Mitch Dureault. 2016 is Squeeze of Scotch's 20th anniversary. The group was founded by members Guy Bruce (group leader-accordion and vocals) and Jim McKillican (guitar and vocals). Over the years the groups has had different line-ups, including Gaetan Hammond (percussion and vocals) who has been with the group for 16 years and Ryan Hicks (guitar and vocals) who has been with the group for 10 years. Over the years, Squeeze has played to thousands of people and has fans all over the world. Visit the link to view a clip of the group performing at Mosaic in 2007.  https://www.youtube.com/watch?v=OwMVRJOh2Ps   $5 cover charge begins at 5:00 PM. Mar. 19: THE SASK SAMPLER. One of the biggest live musical events of the year at The Bushwakker! Don't miss six of Saskatchewan's most promising up-and-coming acts as they bring their A-Game and strut their stuff for artistic directors representing the Regina Folk Festival, the Ness Creek Music Festival and the Gateway Music Festival. We bring in a huge sound system for this event. Big sound, big energy and big performances from some potentially very big Saskatchewan musicians. This year’s featured artists include: Kirby Criddle, Josh Gonzales, Etienne Fletcher, Wolf Willow, Eric Taylor, and Poor Nameless Boy. Cover charge in effect. Show starts at 7:00 PM. Be sure to arrive early in order to get a seat! Mar. 21: Monday Night Jazz & Blues. THE JAZZ BAND-ITS. The biggest band to ever grace the Bushwakker stage. Over 20 members play big band jazz and swing. 8:00 PM. Mar. 23: Wednesday Night Folk. THE HUMDINGERS. Veteran Regina musician, Dave Kapp, makes his Bushwakker debut of his latest act featuring three mature gents playing some extremely sad country! 9:00 PM. Mar. 25: Open at 11:00 AM on Good Friday. Mar. 28: Monday Night Jazz & Blues. 'ROUND MIDNIGHT. Popular act plays popular jazz & adult contemporary tunes. 8:00 PM. Mar. 30: Wednesday Night Folk. RON LOOS. Veteran singer/songwriter/funnyman and acoustic guitar plucker is back to showcase his razor-sharp wit and heartfelt lyrical prowess. 9:00 PM.

The Bushwakker Local Artist Wall features the works of Shauna Perfect. Her bio is as follows: Born and raised in Regina, art has always been a big part of my family in many different mediums. I grew up watching my dad make metal sculptures and decided a few years ago that I wanted to give it a try. I went to school to learn the basics and am now an apprentice welder with the hopes of becoming a journeyperson welder. Currently I am working at Bushwakker as a server and am waiting for my second year of school to start. All of the material I use is scrap metal I've gathered from various locations or from my dad’s garage. Sometimes I'll have an idea of what I want to create but other times I just lay the pieces out in front of me and let them decide.

A new group called the Saskatchewan Craft Brewers Association was officially formed in February. Participating members include The Bushwakker Brewpub and a number of microbreweries from all across the province. An article outlining the new SCBA appeared in both the Saskatoon Star Phoenix as well as the Regina Leader Post. The following is the press release sent to the media: The Saskatchewan Craft Brewers Association Inc. (the “Association”) was incorporated as a non-profit corporation earlier this year. The Association was formed by several small craft breweries located across the province of Saskatchewan, with a vision of fostering a vibrant Saskatchewan craft brewing industry. The purposes of the Association include the following: - Fostering awareness of the cultural, community and economic benefits of locally-crafted beer; - Providing a unified voice to work with government and other regulatory bodies and stakeholders on issues related to small Saskatchewan craft breweries; - Promoting and practicing ethical and legal trade practices in the brewing industry; and, - Generating and maintaining technical and other support for members of the Association and prospective start-up breweries in Saskatchewan. In its inaugural year, the Association is made up of approximately 10 members that are located throughout Saskatchewan, in places ranging from Swift Current to Nokomis and Saskatoon to Regina. Regular membership in the Association is open to breweries that hold a manufacturer permit in the Province of Saskatchewan, brew at a brewing facility located in the Province of Saskatchewan and produces less than 20,000 hL of beer per year. An organization that does not fit the definition of a “Regular Member” can still become an associate member. The craft beer industry continues to steadily grow in Canada  and the U.S. at large rates. In Canada, sales of craft beer are approaching a 10% market share in the beer industry while, in the U.S., sales are approaching 20%. By comparison, Saskatchewan craft beer sales only account for approximately 1-2% market share. As a result, the Association is eager to help grow Saskatchewan’s share of craft beer sales, bringing Saskatchewan-brewed craft beer sales closer to the national average. In addition to providing the public with great, fresh craft beer, a local craft brewing industry provides significant economic benefit. Saskatchewan craft breweries provide jobs, purchase goods and services from other local businesses and provide significant tax revenues, all of which stays in Saskatchewan. Recent data from British Columbia and Ontario (both of which have long had craft brewery associations) estimates that craft beer industries provide approximately $300-600M in direct economic benefits to each province respectively. “The formation of the Saskatchewan Craft Brewers Association represents a significant moment for the Saskatchewan brewing industry. The past several years has seen the rise of a significant collection of small, locally owned and operated craft brewers making great beer. Consumers from all parts of our province are demanding fresh, well-made and diverse beer. We are proud to follow the example of other jurisdictions and work to grow our industry together,” says director Shawn Moen. 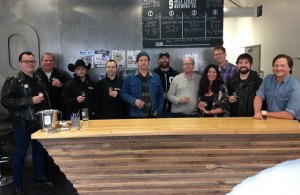 A father and his son, Bobby, arrive at the local Rugby match and Dad can't find the tickets. Dad: "Run home and see if I left the tickets there". Bobby: "No probs, Dad". Half an hour later Bobby returns to his dad who is patiently waiting outside the stadium. Bobby: "Yep, they're on the kitchen table where you left them".

Our New Fresh Pasta Weekend Feature is Meat Lovers Cannelloni. $14.95  (Beer Pairing: Last Mountain Lager). Soup & Sandwich Special is $11.95.  All hot specials are $15.95, except where noted, and include a serving of soup du jour, chopped, or Caesar salad.