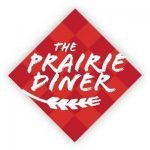 Mar. 1: The BUSHWAKKER ON THE PRAIRIE DINER. It is no secret that  Bushwakker Executive Chef, Mike Monette, and his award-winning kitchen team have earned themselves quite the admirablereputation. Recently The Bushwakker appeared in the televison series, Pizza Wars, and now the spotlight is focused on other notable kitchen offerings; our Stubblejumper Pilsener battered fish and chips, our gigantic nachos and our cheesecakes. The Prairie Diner premier episode for season three featuring Bushwakker will be airing on Tuesday, March 1st  at 10:30 pm. It can be viewed on Access Communications: 12-Basic  & 518-HD  Shaw: 7, 9, 11, 13 -Basic, depending on region & 213-HD,  SaskTel: 19-Basic & 319-HD  Bell: 31-Basic & 352-HD. Don`t miss this great opportunity for a peek into the inner workings of the Bushwakker kitchen! 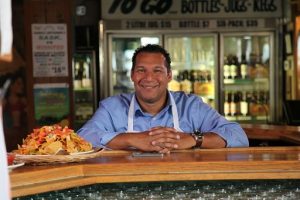 The Bushwakker on TV. We will appear on The Prairie Diner with host, Jody Peters, on March 1st Mar. 2: Wednesday Night Folk. BEN WINOSKI AND JEFF STORRY. This talented acoustic guitar duo is back for another impressive performance. 9:00 PM. Mar. 2: MONTHLY ALES MEETING. The monthly meetings presented by this top ranked brewing club continue to attract an increasing number of enthusiastic homebrewers. The club now has a small public address system in place so it is easier for everyone attending the packed meetings to hear the presentations. Informative brewing topics are presented each meeting to help both the experienced and novice homebrewer make better beers. Meetings are held on the first Wednesday of each month in the Bushwakker basement clubroom at 8:00 PM. Plan to arrive early in order to get a seat. This month's presentation topics include: Weizenbock and Cooking With Beer. New members are always welcome! Mar. 4: FIRST FIRKIN FRIDAY. Enjoy the pomp and circumstance of this long-standing monthly Bushwakker tradition where on the first Friday of each month at 5:30 PM, a piper from the Regina Police Services Pipes & Drums leads a small keg (the firkin) of specially created ale throughout the pub. A volunteer is selected to wield the handmade wooden maul affectionately called, The Mighty Firkin Wakker, and tap the keg in one swift blow. The volunteer and all those in the immediately proximity often receive a suds-soaking experience. View some of our most explosive and memorable firkin tappings set to Tchaikovsky’s 1812 Overture in our “Firkin Compilation” video found on our website homepage. Mar. 7: Monday Night Jazz & Blues. THE U OF R JAZZ BAND. Come hear Regina’s future jazz stars! 8:00 PM. Mar. 9: Wednesday Night Folk. THE STILLHOUSE POETS with special guest opening act, Kara Golemba. 9:00 PM. Mar. 14: Monday Night Jazz & Blues. WHITEBOY SLIM. National award-winning bluesman returns. 8:00 PM. Mar. 16: Wednesday Night Folk. BILLARNEY. A pre-St. Patrick's Day performance from this very large acoustic Celtic group. 9:00 PM. Mar. 17: BUSHWAKKER ST. PATRICK’S DAY PARTY. Traditionally one of the biggest days of the year for pubs all around the world and The Bushwakker is no exception. Enjoy our Irish food features available all day and night including: Traditional Colcannon Cakes, Smoked Salmon Soda Bread Sandwich, Irish Potato & Leek Soup and Irish Cream Panna Cotta with Espresso Caramel. Plenty of Irish drinks including: Guinness Stout, our Green Shamrock Ale and Dungarvon Irish Red Ale, Jameson Select Reserve Small Batch Whiskey and Magner's Apple and Pear Irish ciders. The evening kicks off with tapping of a firkin of our extremely popular Irish Coffee Stout at 6:00 PM. Entertainment from the Regina Police Pipes & Drums, The Prairie Gael School of Irish Dance and newly revitalized Celtic act, Squeeze of Scotch. The band will introduce Bushwakker to their new fiddle player, Mitch Dureault. 2016 is Squeeze of Scotch's 20th anniversary. The group was founded by members Guy Bruce (group leader-accordion and vocals) and Jim McKillican (guitar and vocals). Over the years the groups has had different line-ups, including Gaetan Hammond (percussion and vocals) who has been with the group for 16 years and Ryan Hicks (guitar and vocals) who has been with the group for 10 years. Over the years, Squeeze has played to thousands of people and has fans all over the world. Visit the link to view a clip of the group performing at Mosaic in 2007.  https://www.youtube.com/watch?v=OwMVRJOh2Ps   $5 cover charge begins at 5:00 PM. Mar. 19: THE SASK SAMPLER. One of the biggest live musical events of the year at The Bushwakker! Don't miss six of Saskatchewan's most promising up-and-coming acts as they bring their A-Game and strut their stuff for artistic directors representing the Regina Folk Festival, the Ness Creek Music Festival and the Gateway Music Festival. We bring in a huge sound system for this event. Big sound, big energy and big performances from some potentially very big Saskatchewan musicians. This year’s featured artists include: Kirby Criddle, Josh Gonzales, Etienne Fletcher, Wolf Willow, Eric Taylor, and Poor Nameless Boy. Cover charge in effect. Show starts at 7:00 PM. Be sure to arrive early in order to get a seat! Mar. 21: Monday Night Jazz & Blues. THE JAZZ BAND-ITS. The biggest band to ever grace the Bushwakker stage. Over 20 members play big band jazz and swing. 8:00 PM. Mar. 23: Wednesday Night Folk. THE HUMDINGERS. Veteran Regina musician, Dave Kapp, makes his Bushwakker debut of his latest act featuring three mature gents playing some extremely sad country! 9:00 PM. Mar. 25: Open at 11:00 AM on Good Friday. Mar. 28: Monday Night Jazz & Blues. 'ROUND MIDNIGHT. Popular act plays popular jazz & adult contemporary tunes. 8:00 PM. Mar. 30: Wednesday Night Folk. RON LOOS. Veteran singer/songwriter/funnyman and acoustic guitar plucker is back to showcase his razor-sharp wit and heartfelt lyrical prowess. 9:00 PM.

By Bart Watson    February 17, 2016 The basic concept of the brewpub, pairing beer and food made onsite, is neither new nor particularly novel—taverns have been making their own beer for centuries. Even so, the modern crop of American brewpubs have managed to put a new spin on the concept of beer and food, and in doing so have created economic value that extends beyond the two components independent from each other. That value can be seen clearly in the historical success rate of brewpubs. Since the Brewers Association started tracking in 1980 through 2014, 2,482 brewpubs opened in the United States and only 1,141 closed. That calculates to a historical success rate of 54 percent (a bit inflated by the faster-than-usual opening rate the last few years). In contrast, a study at Ohio State found that 60 percent of restaurants close in a three-year period. To restate, 60 percent of restaurants close in the first three years, whereas only 46 percent of the 2,482 brewpubs that have opened in the past 35 years have closed. That type of disjuncture can only occur when there is something fundamentally different about the categories in question. So what differentiates brewpubs from restaurants more generally? And, in an era where good beer is more readily available than ever, can brewpubs continue their impressive run of success going forward? It’s worth noting up front that some of the advantages of brewpubs stem from their ability as the manufacturer to sell a high-value-added product (aka beer) at better margins  than  a  typical restaurant. In  the latest Brewery Operations and  Benchmarking  Survey,  smaller  brewpubs (fewer than 1,000 barrels) derived 26.8 percent of their sales from house beers, and larger brewpubs (more than 1,000 barrels) derived 46.3 percent of their sales from house beers. In 2010, those percentages were closer to 35 percent for both groups. Regardless of the specific percentage, that means roughly a third of sales stems from a product that averages gross margins that can reach more than $800 per barrel depending on the business model and beer style. These benefits don’t come without risk. Brewpubs are betting heavily on their ability to sell their own beers, and not surprisingly, typically have a much lower percentage of their sales come from guest beers and other bar sales. Most people come to brewpubs looking to try the house beers, so if those beers don’t meet the ever-increasing quality standards, there may be challenges. In addition, running a brewery inside a restaurant requires additional capital, expertise, staff, and more. So brewpubs are a step beyond the average restaurant on the classic risk-reward scale, with more invested, but greater potential benefits. Given this basic tradeoff, what are the additional advantages that have allowed so many brewpubs to keep that balance firmly pointed toward reward?  READ MORE 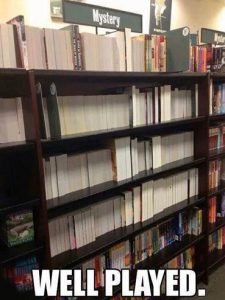 MacGregor was walking along a country road when he came upon a farmer working in his field. MacGregor called out to the farmer "How long will it take me to get to the next town?" The farmer didn't answer. MacGregor waited a bit and then started walking again. After he had gone about a hundred yards, the farmer yelled out "About 20 minutes". "Thank you. But why didn't you tell me that when I asked you?" "Didn't know how fast you could walk".