Our premium red wine feature for February is Torres Infinite (tempranillo/cabernet sauvignon) from Spain. The white is Oyster Bay Pinot Grigio from New Zealand. Both are $8.50 for a glass and $24.95 for a half litre. Our guest tap is currently pouring a Belgian-style Tripel called, Marzyana, from Paddock Wood Brewery in Saskatoon. $9.50 for a pint. There are still bottles of the Bushwakker 25th anniversary ale, The Revenege of the Tartan Tzar, available for take home. This is the strongest beer ever produced in our history. A Russian Imperial Stout infused with Macallan 12 year old single malt scotch whisky. Bushwakker/Joe Fafard 25th anniversary commemorative t-shirts are now on sale. We have received many requests to make our Bushwakker 25th Anniversary History video as well as our Best of First Firkin Friday video available for viewing. Both videos can be viewed simply by visiting our website homepage at www.bushwakker.com. The winner of our Beer Bacon Bands festival Bushwakker Blackberry Mead Package was Derek Tytlandsvik from Tribune, Saskatchewan. 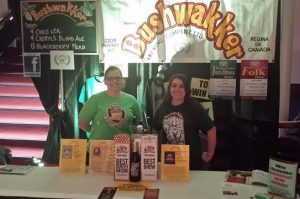 The Bushwakker at the 2016 Beer Bacon Bands festival. A big "thank-you" to Cheryl, Donna, Lexy, Rayna and Kristy for serving at our booth!

Our local arts wall will feature the works of Madison Pascal. Her artist biography is as follows: I am an emerging local Regina artist, currently in my final semester as a Bachelor of Fine Arts student at the University of Regina. I will be graduating with a major in painting and drawing. While I like to be adventurous with mediums I am partial to oil paint and charcoal drawings. I am extremely influenced by nature, the body, dreams, and time. I am infatuated with the idea of time and eternal beauty. When something is turned into a painting or a drawing, time has stopped for the objects depicted. The figure will never age, the flowers will never wilt and the beauty captured will outlast that of the real objects. I want to seduce the viewer and lure them into coming closer to my pieces. I want them to inspect every little detail and nuance that I have put into the piece. I want to get people to have an appreciation for things that I find beautiful. Everyone needs to fall back in love and get lost in the beauty that our world possesses.

by Alex Wilking I’m from St. Louis — the headquarters of brewing hyper-giant Anheuser-Busch — so most of my early drinking days involved downing cans of swill like Budweiser and Bud Light. When I finally developed tastebuds, bottled beer represented a new frontier of purity and elegance. And for the most part, the rest of the world felt the same way. Bottles were, after all, the original benchmark for fancier beer. So something had to give when St. Louis craft breweries ditched the bottle formula and transitioned over to cans. I was up in arms, ranting that this wasn’t what “craft” was about. American culture has long associated canned beer as cheap, flavorless and mass-produced. Now craft breweries are welcoming aluminum cans with open arms in hopes of breaking that stigma, and I realized that this shift is a win-win for everyone involved. For a beer to spoil, it needs to be exposed to oxygen, light and/or heat, which aluminum counters in every way. Aluminum cools faster than glass, thus nullifying heat faster (though it does warm up faster too). It also keeps light out more effectively than glass, which keeps the beer fresher for longer. It’s even cheaper for a brewery to distribute their product in cans, cutting unnecessary costs and saving you fridge space. To be frank, the list goes on — more design space means more artistic freedom. Cans are more portable than bottles. There’s even a sustainability argument that cans are more recyclable than glass, though this is still up in the air. Bottles often hold more volume, but there’s practically no comparison. Yet the average drinker can’t be convinced that all of this stuff is actually true. But our negative perception toward cans isn’t unfounded. For years, aluminum cans did give drinks a metallic tinge of flavor. In order to combat this, the US started coating cans with a polymer called Bisphenol A (BPA) in 1957, which keeps the beer inside from touching the can. BPA is a thin plastic lining that can also be found in products like soda cans and water bottles. The FDA declared that this synthetic substance isn’t dangerous to humans, but many brewers still dismiss BPA as compromising to their beer. Until scientists find an alternative, we’re stuck in this predicament. Debate is still rampant among brewers, but as many have pointed out, the decision is ultimately with the drinker. But it seems the drinker is finally warming up to the idea. Sales of craft beer cans are way up. Many craft breweries now distribute primarily in cans, with Colorado’s Oskar Blues even switching over completely to canned products. NPR reported that canned craft beer in America has doubled in production since 2012, with over 2,000 brands following the practice. Now, nearly 13 percent of craft breweries in the US can at least one of their beers. It’s not like glass is going anywhere — most breweries have taken to canning some beers and bottling others — yet if a simple change in receptacle yields so many additional benefits, we should be embracing said switch. Many still scrutinize BPA, but until a reputable source raises a red flag, it’s safe to assume the alcohol in the beer is worse for you. Let brewers run bottle-only operations if they wish, but as consumers, we have the power to make canned craft beer a successful beer outlet. We’re close to ending the perception that canned beer has to be shotgunned on your front porch. We’re close to realizing that bottles and cans can contain the same quality beer. And if you’re really going to complain that much about beer in a can, you could always just pour it into a glass. 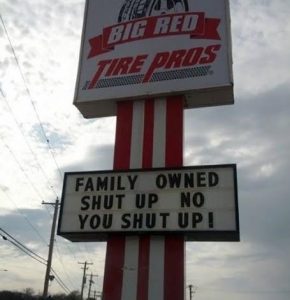 MacGregor is in bed with his missus when there's a rat-a-tat-tat on the door. He rolls over and looks at his clock, and it's half three in the morning. Sod that for a game of soldiers, he thinks, and rolls over. Then, a louder knock follows. "Aren't you going to answer that" says his wife so he drags himself out of bed, and goes downstairs. He opens the door and this bloke is stood outside. "Eh mate" says the stranger "can you give us a push?" "No, bugger off, it's half three. I was in bed!" says the man and shuts the door. He goes back up to bed and tells his wife what happened and she says "MacGregor, you are a prat. Remember that night we broke down in the pouring rain on the way to pick the kids up from the babysitter and you had to knock on that man's house to get us started again? What would have happened if he'd told us to bugger off??" So he gets out of bed again, gets dressed, and goes downstairs. He opens the door, and not being able to see the stranger anywhere he shouts: "Eh mate, do you still want a push??" and he hears a voice cry out "Yeah please mate". So, still being unable to see the stranger he shouts: "Where are you?" and he replies: "I'm over here on the swing".