Our premium red-wine feature for February is Torres Infinite (tempranillo/cabernet sauvignon) from Spain. The white is Oyster Bay Pinot Grigio from New Zealand. Both are $8.50 for a glass and $24.95 for a half litre. Our guest tap is currently pouring a Smoked Porter from Black Bridge Brewery in Swift Current. $7.95 for a pint. Next up is a Belgian style Tripel called, Marzyana, from Paddock Wood Brewery in Saskatoon. A few notable Bushwakker beers have recently become available. The Bushwakker 25th Anniversary beer, The Revenge of The Tartan Tzar, is a Macallan 12-year-old single malt scotch-infused Russian Imperial Stout, MacGregor’s Wee Heavy is also a Bushwakker anniversary beer which only becomes available every two years, and Tart Cherry Ale came on tap last weekend too. All beers are also available in our offsale. Congratulations to Darwin Weimer, the winner of Bushwakker 25th Anniversary Birthday Quiz Draw. Darwin was very pleased to learn that he won a $100 Bushwakker gift card. 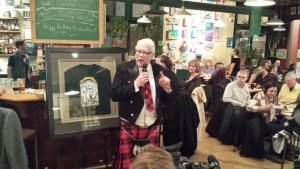 Bushwakker, co-founder, Bev Robertson, addresses a capacity crowd next to the new Bushwakker/Joe Fafard 25th anniversary t-shirt. The Robertson family and the Bushwakker thanks all those who helped us celebrate the Bushwakker’s 25th anniversary on the weekend of Jan. 23,. That includes our customers, especially our regulars, our management team especially Grant Frew, our front, kitchen and brewery staff, and with a special thanks to Ken Mitchell and Joe Fafard for their unique contributions to our celebrations. We were also pleased by the amount of positive media coverage our event received. However, some misinformation got itself published in the process. We have never said that “we produce more craft beer than most other craft-beer brewers in the province, perhaps more than any, including microbreweries”. We did say that “we sell more than most or all craft-beer producers in the province”. We know that Saskatchewan’s oldest microbrewery, Paddock Wood, produces more than twice as much craft beer as does the Bushwakker. However, much of that production is sold outside the province, particularly in Alberta. That sold in Saskatchewan is slightly less than that which is sold by the Bushwakker, all within the province. We don’t know anything about the sales of the newer microbreweries, Prairie Sun, Black Bridge, Nokomis, Rebellion, 9 Mile Legacy, Prince Albert Brewing, Churchill Brewing and Saskatoon Brewing. Our apologies to any microbreweries that thought that our bragging was a little over the top.

Jan. 29-30: THE BUSHWAKKER AT BEER BACON BANDS FESTIVAL. The biggest and newest beer festival to the Queen City is back for a second year at The Conexus Arts Centre. Sample many of our province’s delicious craft beer offerings as well as beers from all across the country. Great live music performances too. Be sure to stop by the Bushwakker booth and see what head brewer, Mitch Dalrymple, has brewed up for you. 7:00 PM. Feb. 1: Monday Night Jazz & Blues. 8'S ENUFF. Talented mini big band belts of some great big band jazz and swing. 8:00 PM. Feb. 3: Wednesday Night Folk. Veteran guitar duo, BILLY & KAREN, play a bit of folk, blues and country. 9:00 PM. Feb. 3: MONTLHY ALES MEETING. If you are looking to improve your skills as a homebrewer, the ALES Club is for you! Come sit in on a meeting with one of the top ranked home-brewing clubs in North America. Meetings are held in the Bushwakker basement clubroom on the first Wednesday of the month at 8:00 PM. Plan to arrive a bit early in order to get a seat. This month's presentation topics include Black Lager/Schwarzbier and Hopping Strategies. New members are always welcome. Feb. 5: FIRST FIRKIN FRIDAY. The very popular long-standing Bushwakker tradition continues! Enjoy the pomp and circumstance as a small keg of specially created beer is paraded throughout the brewpub lead by a piper from The Regina Police Services Pipes & Drums Band. A volunteer is selected to wield the Mighty Firkin Wakker and a suds-soaking experience is usually the result. Tapping ceremony begins at 5:30. Feb. 8: Monday Night Jazz & Blues. AZ PARIS. Don't miss this veteran bluesman. The real deal. 8:00 PM. Feb. 10: Wednesday Night Folk. BEN WINOSKI & JEFF STORRY. Ready for a guitar clinic? These two talented guitar heroes will deliver a dazzling display. 9:00 PM. 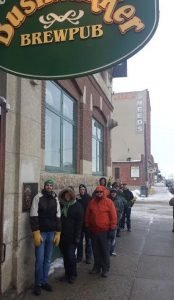 CHARLIE PAPAZIAN DISCOVERS HOMEBREWING AND THE REST IS OUR HISTORY

All About Beer Magazine - January 14, 2016  Tom Acitelli Charlie Papazian was studying nuclear engineering at the University of Virginia in 1970 when a friend mentioned that a neighbor homebrewed. Would Papazian like to try some of the finished product? He would. The pair walked to a place off Montebello Circle in Charlottesville and met the neighbor, an older man who had been homebrewing since Prohibition 40 years before. His recipe was necessarily rudimentary—homebrewing was illegal and there simply weren’t that many ingredients available. So the neighbor used one can of Blue Ribbon malt extract, five to seven pounds of sugar, yeast and water. The recipe made five gallons at a time, and the results weren’t altogether bad. To Papazian, it sure tasted better than what he was buying around town for 69 cents a six-pack.That initial homebrew set the collegian on a very unlikely career trajectory that is now winding down. The Brewers Association (BA) announced Jan. 2 that Papazian, who turns 67 this month, will  step  back  from  day- to -day activities at the organization he has led since cofounding its precursor, the American Homebrewers Association (AHA), in 1978. (Papazian also started the Association of Brewers, which subsumed the AHA in 1983, and then absorbed the Brewers Association of America in 2005 to form the current BA—got that?) He will now commence a kind of semi-retirement as the BA’s “founder, past president.” The industry has long felt Papazian’s influence through the BA, the chief trade vehicle of the nation’s smaller operations, and the AHA, which continues to be the primary media voice of that singular passion and an advocate for vendors, retailers, etc. Consumers, on the other hand, have likely felt Papazian’s influence most concretely through the Great American Beer Festival (GABF) he helped start and through the simple act he committed of putting his homebrewing expertise on paper. I have covered the origins of the GABF in a previous column. Suffice to say, it was a risk when Papazian and Daniel Bradford, the AHA’s first paid employee and former publisher of All About Beer Magazine, pushed it forward in Boulder, Colorado, in 1982. “That’s a great idea, Charlie, only what will you serve for beer?,” the critic Michael Jackson is said to have responded to Papazian after he mentioned the possibility of an American beer festival. There simply was not that much variety in American beer, nor that many brewers; and no large-scale tasting festival of the sort had ever been held in the U.S. The GABF is now in its 35th year and the country’s largest beer festival. As for Papazian’s influence through writing, that started in the mid-1970s, after he had relocated to Colorado and started teaching homebrewing courses in his spare time from a six-page syllabus he developed. In 1976, Papazian, who taught preschool and kindergarten by day, expanded that syllabus to 78 pages and self-published it with the title, The Joy of Homebrewing (somewhere along the line “Complete” would be added before “Joy”). The American Homebrewers Association offered copies for $2.50 each, beginning in 1978, or $2 if you also bought a $4 annual membership in the association. Papazian continued to tweak the guide, increasing its scope and size so much that Bradford, then the AHA’s marketing director, saw the potential for turning it into a saleable book. He acted as Papazian’s agent, landing a small advance in early 1983 from Avon, a Manhattan-based publisher best-known for romance paperbacks and comic books. Throughout the late spring and summer of 1983, Papazian spent mornings and afternoons writing and rewriting in longhand. In the evenings, after everyone else left the AHA offices at his home on 19th Street in Boulder, Papazian would type up the writing on the association’s lone computer. The Complete Joy of Homebrewing dropped in 1984, and connected almost immediately with the growing legions of homebrewers nationwide (one estimate pegged their number at 1.4 million, or the population of San Diego today). The book would go through several printings—and counting—and editions; and would become the best-selling homebrewing guide ever. READ MORE

MacGregor walked into a bar and ordered martini after martini, each time removing the olives and placing them in a jar. When the jar was filled with olives and all the drinks consumed, the Scotsman started to leave. "S'cuse me" said a customer, who was puzzled over what MacGregor had done "What was that all about?" "Nothin', said the Scotsman "My wife just sent me out for a jar of olives!"