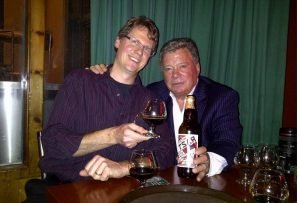 William Shatner Raves About Bushwakker 25th Anniversary Ale Some of you may remember the night William Shatner stopped by The Bushwakker after his Casino Regina show a few years ago. In addition to being active on stage and screen, Mr. Shatner is also a beer enthusiast. He was a celebrity beer judge at The Canadian Brewing Awards and had some influence in our Bushwakker 20th anniversary beer, The Tartan Tzar, receiving a gold medal in its style category. When Bill was in the Bushwakker, the first thing he asked for was a bottle of the single malt whisky-infused championship stout. Fortunately, Bushwakker head brewer, Mitch Dalrymple, had a few bottles safely stowed in his personal cooler for just such an occasion and we were able to fulfill Bill’s request. Mitch decided to brew an even bigger version of that beer which will serve as our 25th Anniversary beer. Bar manager, Grant Frew, contacted Mr. Shatner to investigate if he would like to try our enhanced 25th anniversary offering. He said he would “love a bottle or two” and two bottles were promptly shipped to his office in California. On Monday afternoon, we received his comments below: Dear Grant: This could be the best beer and the best single malt I have ever tasted. Sincerely, Bill Shatner Only 600 bottles were produced and now only 598 remain. They go on sale at 11:00 AM on Saturday, January 23rd. Limit of two bottles per person. Enjoy one now and let the other bottle age in your cellar to develop its depth and complexity for years to come! You will notice that our Bushwakker logo appearing at the top of our Wakker Weekly newsletter has changed. We will be acknowledging our quarter century of service throughout 2016. Our big Bushwakker 25th Birthday and Robert Burns birthday celebration will be on Saturday, January 23rd. Our very limited edition 25th anniversary beer goes on sale at 11:00 AM. The evening will be full of events celebrating both The Bushwakker's and Robert Burns' birthday. Ask for our 25th Birthday quiz for a chance to win a $100 Bushwakker gift card.

Jan. 23: The Bushwakker 25th Anniversary Party. Get ready for the biggest birthday bash we have ever presented! Things kick off at 11:00 AM with the release of our commemorative Revenge of The Tartan Tzar Macallan 12-Year-old single malt scotch infused Russian Imperial Stout which has been aging for over a year. Only 600 bottles were produced. Limit of two bottles per person. Evening festivities include; the tapping of a firkin of Highland Park infused MacGregor's Wee Heavy, the unveiling of a 25th anniversary t-shirt designed and presented by renowned Saskatchewan artist, Joe Fafard, the presentation of a special Bushwakker poem composed by Saskatchewan author and playwright, Ken Mitchell, speeches and presentations, a Bushwakker history video as well as a "Best of First Firkin Friday" video, free haggis, neeps and birthday cake and rollicking Celtic reels from The Tilted Kilts. The dance floor will be open! Yes, we need to celebrate Robert Burns' birthday too so there will be Highland dancing and the Regina Police Services Pipes & Drums band will perform. Come join us and allow us to thank you for a quarter century of incredible enthusiasm and support! $5 cover charge. Jan. 25: Monday Night Jazz & Blues. The Jeff Mertick Band. Regina bluesman, Jeff Mertick is back with his band of skilled musicians and their unique style of eclectic and original soul/blues tunes. 9:00 PM. Jan. 27: Wednesday Night Folk. The Empire Associates. Regina indie band influenced by Mumford & Sons, The National, Dan Mangan, The Beatles, & Bob Dylan. 9:00 PM. Jan. 29-30: The Bushwakker at Beer Bacon Bands Festival. The biggest and newest beer festival to the Queen City is back for a second year at The Conexus Arts Centre. Sample many of our province’s delicious craft beer offerings as well as beers from all across the country. Great live music performances too. Be sure to stop by the Bushwakker booth and see what head brewer, Mitch Dalrymple, has brewed up for you. 7:00 PM. Feb. 1: Monday Night Jazz & Blues. 8's Enuff. Talented mini big band belts of some great big band jazz and swing. 8:00 PM. Feb. 3: Wednesday Night Folk. Veteran guitar duo, Billy & Karen, play a bit of folk, blues and country. 9:00 PM. Feb. 3: Monthly ALES Meeting. If you are looking to improve your skills as a homebrewer, the ALES Club is for you! Come sit in on a meeting with one of the top ranked home brewing clubs in North America. Meetings are held in the Bushwakker basement clubroom on the first Wednesday of the month at 8:00 PM. Plan to arrive a bit early in order to get a seat. This month's presentation topics include Black Lager/Schwarzbier and Hopping Strategies. New members are always welcome. Feb. 5: First Firkin Friday. The very popular long-standing Bushwakker tradition continues! Enjoy the pomp and circumstance as a small keg of specially created beer is paraded throughout the brewpub lead by a piper from The Regina Police Services Pipes & Drums Band. A volunteer is selected to wield the Mighty Firkin Wakker and a suds-soaking experience is usually the result. Tapping ceremony begins at 5:30. Feb. 6: Bushwakker Mardi Gras Dinner. It is no secret the Bushwakker executive chef, Mike Monette, loves Cajun style cuisine. Join us for dinner and enjoy one of our festive Mardi Gras meal features. We will also have a couple of Mardi Gras inspired bevies available. Shake off those winter blues and wake up your taste buds this Saturday night. Reservations accepted. Feb. 8: Monday Night Jazz & Blues. AZ Paris. Don't miss this veteran bluesman. The real deal. 8:00 PM. Feb. 10: Wednesday Night Folk. Ben Winoski & Jeff Storry. Ready for a guitar clinic? These two talented guitar heroes will deliver a dazzling display. 9:00 PM.

Bushwakker co-Founder & President Bev Robertson It may be trite to say so, but the lifeblood of every business is its customers, so, on this occasion of the Bushwakker’s 25th anniversary, we thank our customers for their support, both the occasional customer and especially those who have visited us at least once per week; our regulars, of which there are many. We haven’t done any survey of other restaurants in Regina, including brewpubs, but we suspect that the fraction of Bushwakker business that comes from our regulars is extremely high in comparison to all other restaurants in Regina, so we extend a special thanks to our regulars. You may have observed that we used the word “customers” above, while it’s fashionable in the restaurant business to call customers “guests”. I’ll explain the reason because it illustrates our corporate philosophy. In cross-country skiing circles “Bushwhacking” means to make one’s own way through fresh snow rather than following prepared or well-trod trails. The Bushwakker values those business practices that are based on successful practical experience, but we are also prepared to challenge accepted norms if we suspect that their justification is weak. In other words, we sometimes go our own way rather than follow others. That, together with our corporate philosophy to respect the intelligence of our customers, means that we believe that use of the word “guest” is a transparent attempt to manipulate the customer into a false sense of being appreciated.  At the Bushwakker we prefer to make the customer feel appreciated by our actions rather than by words. That means that we try to make our customers feel appreciated by first providing what he or she came for; good food, good drink, good service and a relaxing ambiance, and by the fact that our staff recognizes and rewards repeat business. When we opened in 1991 the Bushwakker was the first full-mash craft brewery in Saskatchewan. The craft beer industry is still in its infancy in this province, but there are now several new microbreweries in Saskatchewan that take their involvement in the industry seriously. We note that all craft microbreweries in the southern part of the province were founded by current and former members of the amateur brewing club, the “Ale and Lager Enthusiasts of Saskatchewan; ALES”. We co-founded ALES roughly 30 years ago and the Bushwakker was instrumental in resurrecting ALES soon after it opened. ALES has become one of North America’s most successful amateur brewing clubs. Twenty-six years ago, when I was planning the Bushwakker, I sometimes speculated about how the lives of our family members might be changed, both if the Bushwakker were successful and if it were not. Fortunately, we no longer need to consider the possible consequences of failure. In fact, the Bushwakker sells more craft beer in Saskatchewan than most, and perhaps all, craft breweries in Saskatchewan, including microbreweries. The consequences of success have exceeded our wildest speculation twenty-six years ago. For instance, it didn’t occur to me that members of three generations of the Robertson family might someday become involved in the business, or that the Bushwakker might become known to Canadian beer geeks across the country. Once again, a big THANKS to everyone who made the Bushwakker what it is today! That includes not only our customers, but also our management team and all of our employees over the years. 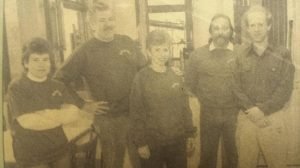 Time Out: An Anniversary

Husband and his wife were celebrating 50 years together. Their three kids, all very successful, all agreed to a Sunday dinner in their honor. "Happy Anniversary Mom & Dad" gushed son number one, a surgeon, "Sorry I'm running late. I had an emergency at the hospital with a patient, you know how it is, and didn't have time to get you a gift." "Not to worry" said the father, the important thing is that we're all together today." Son number two, a lawyer, arrived and announced "You and Mom look great Dad". I just flew in from Los Angeles between depositions and didn't have time to shop for you". "It's nothing," said the father. "We're glad you were able to come." Just then the daughter, a marketing executive, arrived. "Hello and Happy Anniversary! I'm sorry but my boss is sending me out of town and I was really busy packing, so I didn't have time to get you anything." After they finished dessert, the father said, "There's something your mother and I have wanted to tell you for a long time. You see, we were very poor. Despite this, we were able to send each of you to university. Throughout the years your mother and I knew we loved each other very much, but we just never found the time to get married." The three children gasped and all said, "You mean we're bastards?" "Yep," said the father, "and cheap ones too!"