Our premium wine features for December are Charles Smith Velvet Devil Merlot from Washington State. $9.95 for a glass and $27.95 for a half litre as well and House Wine Co. Riesling Pinot Grigio VQA from Niagara, Ontario. $7.95 for a glass and $21.95 for a half litre. Our guest tap is currently pouring Biere D'Hiver (Winter Ale) from Townsite Brewery in Powell River, BC. $9.50 for a pint. Next up is another specialty offering from the same brewery, Townsite Li’l Red Flanders Red Ale. Looking for a gift for the Bushwakker enthusiast on your list? Bushwakker gift cards make excellent stocking stuffers. If you are looking for something unique, our Growler Gift Boxes are a big hit. We even have fancy, ornate growlers featuring ceramic closures and steel handles. Brand new this year, we have our Bushwakker “Beer To Die For” hoodies available in either zipper or pullover styles. TripAdvisor has re-calibrated and The Bushwakker Brewpub holds the number four position in Regina again.

Dec. 21: Monday Night Jazz & Blues. A Bluesy Little Christmas with The Shane Reoch Band. Regina's friendliest bluesman delivers great blues and seasonal favourites. 8:00 PM Dec. 23: Wednesday Night Folk. Becky & The Jets. Classic folk hits and from this popular Regina act. 9:00 PM. Dec. 24: Christmas Eve. Open until 5:00 PM. Dec. 25: Closed. Merry Christmas! Dec. 26: Boxing Day. Open regular hours. Dec. 28: Monday Night Jazz & Blues. Call Me Mildy. Original alternative blues from this dynamic four piece act. 8:00 PM. Dec. 30: Wednesday Night Folk. Billarney. Great Celtic music from this very large acoustic band. 9:00 PM. Dec. 31: Nothing For New Year's 10. It's been a decade since we decided we wouldn't do anything special for New Year's Eve at The Bushwakker. It has definitely proven to be our most popular non-event ever! To celebrate 10 years of nothing, we're doing absolutely nothing! We'll most likely do even less than normal! There will still be no noise makers, no band, no escalated drink prices, no cover charge, no midnight champagne, no dancing, no line-ups, no hassle, no problem. We will however be accepting reservations because it seems like there are quite a few of you who get pretty excited about a whole lotta' nothin'! Jan. 1: Closed. Happy New Year!  Jan. 4: Monday night Jazz & Blues. Brian Baggett. Enjoy the rich sound of the 10 string Chapman Stick from this native of Houston, Texas. 8:00 PM. Jan. 6: Wednesday Night Folk. Lexy & The Power Trio Five. Bushwakker staff members love to sing. Bartender/server, Lexy Desjarlais, makes her Bushwakker debut and will deliver some folk pop with the help of a few of her friends. 9:00 PM. Jan. 6: Monthly ALES Meeting. Have a Happy “BREW” Year with one of the topped-ranked home-brewing clubs in the country. If you received a home brewing kit for Christmas and want to learn how to use it to its full potential, come sit it on a meeting and see what the ALES Club can offer you. This month’s topics of discussion are Belgian Quadruples and The Science of Mashing. Meetings are held on the first Wednesday of the month in The Bushwakker basement clubroom. New members are always welcome. Jan. 8: Second Firkin Friday. We were closed on the first Friday of January for New Year’s Day. We couldn’t possibly miss a month of creating a special small keg of brew and parading it throughout the brewpub lead by a piper from The Regina Police Pipes & Drums Band. A guest volunteer firkin tapper will be selected and he/she will attempt to tap the keg with The Mighty Firkin Wakker in one firm blow. Don’t miss this suds-soaking spectacular at 5:30 PM. Jan. 23: The Bushwakker 25th Anniversary Party. Get ready for the biggest birthday bash we have ever presented! Here's a glimpse into what we are planning. The release of our commemorative Revenge of The Tartan Tzar Macallan 12 Year old single malt scotch infused Russian Imperial Stout which has been aging for over a year, the tapping of a firkin of Highland Park infused MacGregor's Wee Heavy, the unveiling of a 25th anniversary t-shirt designed and presented by renowned Saskatchewan artist, Joe Fafard, the presentation of a special Bushwakker poem composed by Saskatchewan author and playwright, Ken Mitchell, speeches and presentations, free haggis, neeps and birthday cake and rollicking Celtic reels from The Tilted Kilts. The dance floor will be open! Yes, we need to celebrate Robert Burns' birthday too. Highland dancing and a massive pipe and drum band will perform. Come join us and allow us to thank you for a quarter century of incredible enthusiasm and support! 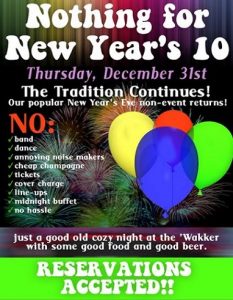 Our biggest non-event ever! Reservations now being accepted for Nothing For New Year’s 10!

By Jeremy Nobile   December 06, 2015 As a craft beer frenzy sweeps the country, Americans are drinking up the home brew craze. According to the American Homebrewers Association, there are an estimated 1.2 million home brewers in the country, two-thirds of which are believed to have started in the last 15 years. The hobby has changed a lot, though, compared to modern home brewing’s early days of the 1980s and 1990s, said Nathan Kovach, vice president of The Society of Northeast Ohio Brewers, a Cleveland home brew club otherwise known as SNOB. Those were the “dark ages,” Kovach said. “The ingredients and materials just weren’t on par with where they are today,” Kovach said. “But they got into it because they like good beer, and maybe they couldn’t find or afford to buy good beer.” Decades ago, home brewing often was the best way to sample a wide variety of unique beer styles — besides being a fun activity similar to cooking. But with the ubiquity of craft beers today and access to premium ingredients, no one really needs to produce their libations at home. Yet, the appeal of home brewing only continues to grow despite easy access to good brew. As interest in the hobby soars, so has participation in local home brew groups like SNOB. The group has 288 members today, a 190% increase compared with just six years ago. Continue reading: http://www.crainscleveland.com/article/20151206/NEWS/151209865/crafting-a-home-brewing-craze Regina’s Ale and Lager Enthusiasts of Saskatchewan (ALES) were founded in 1979 by Bev Robertson (also founder of the Bushwakker and the Warehouse District Business Improvement District) and Ron Thompson, founder of the home brewing supply stores with the name “Harvest Brewing”. ALES membership continues to grow.

by Robert Mclean  November 17, 2015 Constellation Brands (STZ), the company that makes Corona Extra and Modelo Especial, announced Monday that it was paying $1 billion for craft brewer Ballast Point Brewing & Spirits. The purchase is the latest example of a major brewer paying an eye-popping amount for a piece of the fast-growing craft beer segment. With sales of mega-brands like Bud and Coors stagnating, Constellation (STZB) is paying for Ballast Point's growth potential. The San Diego-based craft brewer expects to sell nearly 4 million cases of beer in 2015 -- more than double the previous year. Net sales are forecast to hit $115 million. The Brewers Association, an industry trade group, said that craft beer sales grew by nearly 18% last year. Brewers produced more than 22 million barrels of the stuff in 2014, compared to only 8.5 million barrels in 2008. Constellation isn't the first big brew label to court smaller players. AB InBev bought Seattle's Elysian Brewing in January after acquiring Oregon's 10 Barrel Brewing in 2014 and Chicago-based Goose Island in 2011. In May, SABMiller announced it would buy London's Meantime Brewing Co., a leading U.K. craft beer. The big brewers don't have to buy the smaller brewers outright. They can purchase a significant minority stake which essentially gives them control over a brand that many of its customers like to think of as independent. For Constellation, buying a craft brewery is a major strategy change. Amid a wave of industry consolidation, CEO Rob Sands said in 2014 that he wasn't interested in buying a craft brewery. "People expect one of the big guys to get in and roll up the craft business," he said at the time. "But it's not clear that's a good strategy." The move comes shortly after AB InBev (AHBIF) announced it would acquire SABMiller for $104 billion, the latest example of a big brewer trying to get even bigger. Regulators are expected to take a close look at the proposed merger. 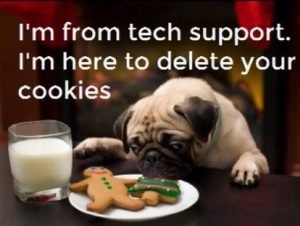 Scottish Confessional MacGregor goes into the confessional box after years of being away from the church. There's a fully equipped bar with some nice single malt scotches and a selection of Scottish ales on tap. On the other wall is a dazzling array of the finest cigars, cheeses and chocolates.Then the priest comes in. "Father, forgive me, for it's been a very long time since I've been to confession, but I must first admit that the confessional box is much more inviting than it used to be." The priest replies: "Get out. You're on my side." What is Celibacy? Celibacy can be a choice in life, or a condition imposed by circumstances. While attending a Marriage Weekend, my wife and I listened to the instructor declare, 'It is essential that husbands and wives know the things that are important to each other..." He then addressed the men, 'Can you name and describe your wife's favorite flower?' I leaned over, touched my wife's hand gently, and whispered, 'Robin Hood All-Purpose, isn't it honey?' And thus began my life of celibacy...