Our November premium red wine feature is Pelee Island Reserve Baco Noir VQA from Ontario. The white is Seven Daughters Crisp White (7 varietal blend) from California. Both are $8.50 for a glass and $24.95 for a half litre. Our guest draught tap is currently pouring the Anderson Valley Highway 128 The Kimmie, The Yink, and the Holy Gose from California. $8.50 for a pint. Next up will be the Nokomis IRA, an India Red Ale from Nokomis, Saskatchewan.

Jeff Hamon is a landscape and portrait photographer in Regina and is our November artist of the month. His frequent subjects are the power and formerly inhabited homes of the prairies, and the uniqueness of our sunsets beauty of storms, and skies. He has this to say: “I’m a photo nerd. I’ve been using cameras since I was a kid and have gone from Polaroid to 110 to Disc to 35mm to Digital to Camera Phone and they’re all tools. Something to create an image with. The best camera is the one you have with you wherever you are. Photography is what I would do every day all day if I were able. There is just so much beauty and interest around us in our busy lives and my brain sees it in a way that I want others to experience. Every season, every day, there is something to see and enjoy and think about. I work at a computer all day and this gets me out and enjoying the world outside our walls. All of the pieces on the wall are for sale and are also for display of size and medium. I create custom-order photos in size and material of your choice to match décor and taste.  Canvas is timeless with natural texture and suits rustic images. Polished aluminum prints give high contrast, colours that POP, and are weatherproof (I’ve had people buy for washroom or yard). Wood prints are unique works of art due to natural wood grain variations. Metallic paper has a shine to it that brings it to life and is laminated for protection to be hung framed or unframed.  Every picture can be framed in select contemporary frames. Gift certificates are available to allow family/friends to choose their own art. Visa/MC/Amex are accepted. And commercial/business purchases or leases are always welcome. I hope you find something that draws your eye in some of the images on display! Thanks to folks like The Bushwakker staff and management who give a venue for local art to be seen. You can find me online on Facebook, Instagram, and my official website at www.Jeffhamonphotography.ca” 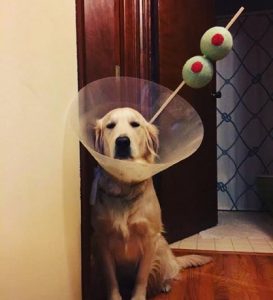 A Hallowe’en Hangover Gone to The Dogs

Brad Tuttle    October 16, 2015 When the massive Anheuser-Busch InBev-SABMiller merger is complete, the resulting company will own over 400 beer labels, including 8 out of America’s top 10 brands. Right away, the new Bud-Coors-Miller-Stella-Molson conglomerate will be responsible for producing roughly 30% of all the suds on earth. And if the corporate overlords have their way, the company will gain even more market share down the line. To do so, it’ll have to expand into more regions and/or reverse the trend that’s most visible in the U.S.: the rise of small, independent craft labels. According to the Brewers Association, which represents the craft segment, the number of breweries and craft beer’s portion of overall beer sales have both doubled over the past five years. At the same time, sales of “macro” beers like Budweiser and Miller have gone flat or declined. While the $104 billion merger of the world’s #1 and #2 beer companies is intended to assure Big Beer’s dominance in the global marketplace, it’s actually its place—or even destroy it, if possible. Here are a handful of tactics Big Beer is using to try to keep its brands on top. #1. Create your own quasi-craft brands. Read Blue Moon Brewing’s history on the brand’s website and you’ll learn that the Belgian-style wheat ale was created by beer-loving visionaries two decades ago in Denver. What you won’t see there, nor at the Blue Moon Brewery at the Sandlot, where the Colorado Rockies play, nor on a bottle of Blue Moon, is mention of the fact that the brand has always fallen under the domain of Coors, the Colorado-based brewer that’s now owned by MillerCoors, which is itself a subsidiary of SABMiller.  Blue Moon was ahead of its time in what’s become known as the “crafty” beer category—brands that seem like small indie labels that are actually owned by the world’s biggest beer companies. Shock Top is Anheuser-Busch InBev’s best-known faux craft beer, and according to one source, “75% of consumers believe Shock Top is from a small/unknown brewer.” Clearly, these brands hope to win sales by creating the appearance of indie craft authenticity, all while using the production and marketing advantages of a global corporation. But they might not be able to blur the lines indefinitely. Earlier this year, a class-action lawsuit was filed against MillerCoors because it presents Blue Moon as a craft beer when it is not—at least not in terms of the commonly accepted Brewers Association definition that a craft brewer is small and independently owned. #2. Snatch up craft brews that’ll sell out. If you can’t beat them, buy them. That seems to be the philosophy behind Anheuser-Busch’s strategy for purchasing popular craft labels such as Goose Island, Elysian, 10 Barrel, Golden Road, and Blue Point. Generally speaking, these brands vigorously proclaim that their quality and dedication to customers won’t diminish after the change in ownership, and they say they still deserve to call themselves craft beers. Purists who believe only small, independently owned operations merit the “craft” label obviously disagree. In any event, according to the Brewers Association, America is now home to over 4,000 breweries, roughly double the number just five years ago.  Even the new, ultra-powerful AB InBev-SABMiller super conglomerate can’t buy them all out, one would think. But the global beer behemoth can strategically purchase key craft brewers and use them to make it extremely difficult for independent little guys to be successful in the marketplace. #3. Defend macro brews, bash craft snobs. This part of the plan is probably the most bizarre, and perhaps has backfired on Big Beer. On the one hand, the beer giants have purchased several prominent craft labels and created their own faux craft brands. On the other, Anheuser-Busch InBev decided it was wise to run with an ad campaign mocking craft beer that theoretically supports its struggling Budweiser label. The commercial, first aired during the 2015 Super Bowl, called Bud “Proudly a Macro Beer,” while making fun of hipsters who “fussed over” flavors like pumpkin peach ale. (Budweiser sales, it should be noted, have been falling for roughly a quarter of a century as drinkers increasingly turn to light beers and craft brews.) For what it’s worth, after the Budweiser commercial aired MillerCoors released a statement defending all kinds of beer, including the craft category: “We believe each and every style of beer is worth fussing over … Quality isn’t something that belongs to a single style of beer or a single brewer.” #4. Control distribution. For better or worse, America’s alcohol selection is the result of three-tier system, in which brewers and importers (tier #1) but one of several strategies being employed to put the pesky craft category in must use distributors (tier #2) to place their beverages in the stores and restaurants that ultimately sell them (tier #3). “Independent beer distributors,” the National Beer Wholesalers Association states, “work to help new brands get to market and to ensure that consumers can choose from a vast selection of beer.” The problem is that not all distributors are independent. Anheuser-Busch InBev has been purchasing distributors around the country—including two recently in Colorado, one of the nation’s craft beer strongholds. Critics say that there’s an imbalance when one company owns two of the three tiers for distribution, and point to the history of AB-owned distributors only selling AB products, thereby shutting out craft brands and forcing them to find other means of distribution. #5. Merge and overwhelm the marketplace. “At some point, weak growth prospects can’t be concealed or offset,” Tara Lachapelle wrote this week in a Bloomberg column about why megamergers happen. “Mainstream brands such as AB InBev’s Bud Light and Coors Light, part of a joint venture between SABMiller and Molson Coors, have been losing share in the U.S. as the craft names gain.” Because increasing sales of Budweiser and Coors Light seems impossible given changing consumer tastes, the companies seem to be trying to please shareholders by choosing consolidation—which at least looks like growth on paper. 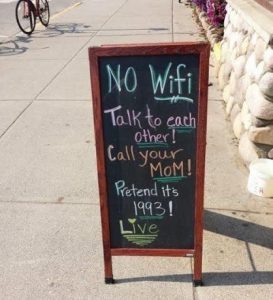 Upon arriving home, MacGregor was met at the door by his sobbing wife. Tearfully she explained, "It's the pharmacist. He insulted me terribly this morning on the phone." Immediately MacGregor drove downtown to confront the pharmacist and demand an apology. Before he could say more than a few words, the druggist told him, "Now, just a minute, please listen to my side of it... This morning the alarm failed to go off, so I was late getting up. I went without breakfast and hurried out to the car, just to realize that I locked the house with both house and car keys inside. I had to break a window to get my keys. Then, driving a little too fast, I got a speeding ticket. Later, about three blocks from the store, I had a flat tire. When I got to the store there was a bunch of people waiting for me to open up. I opened and started waiting on these people, and all the time the darn phone was ringing off the hook." He continued, "Then I had to break a roll of nickels against the cash register drawer to make change, and they spilled all over the floor. I got down on my hands and knees to pick up the nickels; the phone was still ringing. When I came up I cracked my head on the open cash drawer, which made me stagger back against a showcase with bunch of perfume bottles on it...all of them hit the floor and broke. Meanwhile, the phone is still ringing with no let up, and I finally got to answer it. It was your wife. She wanted to know how to use a rectal thermometer...and, honest Mr. MacGregor, all I did was tell her!"