Our November premium red wine feature is Pelee Island Reserve Baco Noir VQA from Ontario. The white is Seven Daughters Crisp White (7 varietal blend) from California. Both are $8.50 for a glass and $24.95 for a half litre. Our guest draught tap is currently pouring the Anderson Valley Highway 128 The Kimmie, The Yink, and the Holy Gose from California. $8.50 for a pint. Next up will be the Nokomis IRA, an India Red Ale from Nokomis, Saskatchewan. 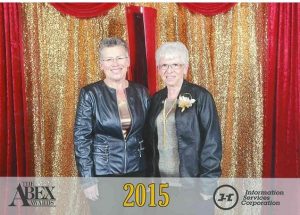 A big "thank-you" to all our staff and customers from across Canada who voted for The Bushwakker Brewpub in the 2015 ABEX Business Awards. Unfortunately we did not win. Bushwakker general manager, Kelly Monette, and her mother, Bushwakker general manager emeritus, Elaine Robertson, attended the ABEX gala in Saskatoon. It was a great honour to be recognized among some of Saskatchewan's top businesses.

Oct. 31: Single Malt Scotch Tasting Tickets RELEASE DAY. Tickets to our November 28th annual Single Malt Scotch Tasting Event go on sale at 11:00 AM. Six specially imported single malts will be evaluated. This year`s offerings include: Edradour Caledonia, Signatory Vintage Glen Scotia 1991 22 year old, Benromach Chateau Hermitage Finish, Adelphi Glenrothes 2007, Adephi Fascadale Batch #8 and Kilchoman Machir Bay. Enjoy pipes and drums and highland dancing performance. Tickets $79.95 each. Only 150 will be made available. This event historically sells out in one day. Oct. 31: A Celtic Hallowe’en. What a Saturday night this will be! Rollicking Celtic reels from The Tilted Kilts, Great Pumpkin Spiced Brown Ale on tap and a Hallowe’en costume contest at 10:30 PM where the winner will receive a $100 Bushwakker gift card. $5 cover charge begins at 6:00 PM. Nov. 2: Monday Night Jazz & Blues. The U of R Jazz Band. Come hear Regina's future jazz stars. 8:00 PM. Nov. 4: Wednesday Night Folk Special Edition. Regina Women In Song Autumn Showcase. Our annual Regina Women in Song event proved to be so popular this past spring that we decided to offer a fall edition, one which expands beyond our Regina borders. Singer-songwriters Megan Nash(Palmer, SK), Kara Golemba (Indian Head, SK) and Roxie Lenton (Regina, SK) will share some original music in this special edition of Wednesday Night Folk. 9:00 PM. For more info visit: https://www.facebook.com/events/1493087284351657/ Nov. 4: Monthly ALES Meeting. Plenty of excitement will be had by all attending this month's meeting of the Ale & Lager Enthusiasts of Saskatchewan in the Bushwakker basement clubroom at 8:00 PM. Lots of discussion and presentations on how to improve your skills as a homebrewer plus special Russian Imperial Stout; Big Brew Day Tasting topics will be addressed. New members are always welcome. www.alesclub.com Nov. 6: First Firkin Friday. The popular longstanding Bushwakker monthly tradition continues! Enjoy the pomp and circumstance as a piper from The Regina Police Services Pipes & Drums leads a small keg in a procession throughout the pub. The keg is then tapped by a volunteer firkin tapper who wields the “Mighty Firkin Wakker” and attempts to tap the keg of specially created suds in one single blow. Things have been pretty messy over the last few months. Will we have a clean tapping in November? Stop by early to see and taste for yourself. 5:30 PM.

BY BEN JOHNSON | October 9th, 2015 Early this morning, Labatt, one of Canada’s largest and oldest brewers, announced that it had purchased Toronto craft brewery Mill Street. Aside from an announced $10 million investment in Mill Street’s Toronto facilities, the terms of the deal are confidential— but it’s safe to assume that the exact dollar amount is in the range of one or two shit-tons of cash. And while a lot of Ontario craft beer fans are quick to cry “sellout,” it’s probably best to consider this deal with a level head. Put down the pitchforks, guys. (Where did you even get those things?) First, this is not the only time a large brewery has purchased a Canadian craft brewery to get some leverage in the craft-brew market (see: Molson buying Creemore). This same sort of thing is becoming a trend in the United States, where craft beer has, by some estimates, 11 per cent of the market, and large breweries are desperate to find a way to stem the tide. In the last few years, craft brewers Pyramid, Magic Hat, Anchor Steam, Kona and Goose Island have all been bought up by big companies, Goose Island for a reported $38.8 million. ABInBev, the Belgian-Brazilian company that owns Labatt, has spent the past five years buying up New York’s Blue Point Brewery Co., Oregon-based 10 Barrel Brewing, and Seattle’s Elysian. By the time I finish writing this article, they’ll probably have bought someone else. Is it even possible for a company like Mill Street to “sell out,” anyway? Mill Street has always brewed fairly approachable beers with mainstream appeal as a means of growing its business and, presumably, getting big and successful, and its beer has never been favoured by the kinds of bearded connoisseurs who swirl barrel-aged brews. The company has already been quietly distributing its products in the United States for a while. In terms of marketing and distribution dollars, it operates in a totally different league than the little brewpub around the corner from you. It’s not (or shouldn’t be) surprising that a brewery that always had its eye on financial success has accepted a (presumably huge) buyout offer. If you like Mill Street Brewery—that is, if you actually like the people working at the company and making the beer—this buyout is clearly good news. According to the press release this morning, the company’s principals will still be at the helm of Mill Street under Labatt. Mill Street’s very talented brewmaster, Joel Manning, will still be making the beer. It’s simply that Manning and his friends who run the company are suddenly in higher tax brackets. And so good for them. There are many different ways to measure success, and having a buttload of money backed up to your front door in exchange for the company you built is one of them. And if you really like drinking Mill Street beer, then this whole deal is a good thing for you, too. The same people who make the beer you like will still be making it, only now they’ll have access to the vast, Scrooge-McDuck-swimming-in-a-sea-of-gold levels of wealth and resources behind ABInBev, the largest beer company in the entire world. Mill Street’s brewmasters will now be able to obtain any and all ingredients they could ever dream of brewing with, the Mill Street brand will be able to grow by means of one of the universe’s most aggressive marketing machines, and the beer that Mill Street brews will now enjoy distribution across the entire country (and likely some other countries, too). There aren’t that many places in Canada where you can’t get a Mill Street beer, but pretty soon there will be even fewer. In other words, pitchfork-wielding craft beer fan: Mill Street beer isn’t leaving us. In fact, it’s about to be everywhere. And if I still haven’t convinced you to call off the riot, consider this: next year at the Rogers Centre, hopefully while we’re watching the Blue Jays on their way to raising their fourth World Series banner, there’s even a slim chance we might be able to do so while sipping a beer that was actually made in Toronto.

BEV ROBERTSON, PRESIDENT BUSHWAKKER BREWING CO. The recent takeover of Mill Street Brewing by Labatt’s Brewing has generated quite a bit of chatter around Regina, more than we would have expected. This purchase represents the entry into Canada of a major trend that’s been happening in the U.S. now for a few years; larger companies buying up microbreweries, and to a lesser extent, brewpubs. For years now the major brewers, or as we prefer “industrial brewers”, have been losing sales, at the rate of a few percentage points per annum. Meanwhile, they’ve been watching both types of craft breweries, microbreweries and brewpubs, grow and multiply, at the rate of roughly 15% per annum, although from a much smaller starting point. They have finally decided that the best way to preserve their share of the beer market is to get involved in the craft beer segment of the industry, mainly by buying microbreweries.  That scares some people. First, the definition of a microbrewery as set out to the North American craft beer organization, the Brewer’s Association, makes it clear that if a “micro” is mainly owned by an industrial brewery, it is no longer a micro. Next, some of us are old enough to remember back when we first got a chance to try something other than the strange watery product produced by the North American industrial breweries. We discovered flavour in beer for the first time in European imports.  Then those European breweries contracted with North American breweries to brew their product on this side of the Atlantic, or as in the case of Löwenbräu, eventually sold their operations to ABInBev. The North American breweries decided, in their wisdom, that their customers didn’t really want taste in their beer and removed it from their version of the original European product! More recently some industrial breweries bought up micros just to shut them down.  So then we understand the apprehension. However, we already have had enough time to look at the consequences of these takeovers in the 21st century. So far, the larger breweries seem to have learned that it’s the taste that makes these micros popular and it doesn’t make sense to get rid of that taste.  In fact they usually leave the existing brewing team in place. That doesn’t mean that the industrial brewers are all that savvy. A classic example of bone headedness was the add that ABInBev put out during the last Superbowl, mocking craft beer and craft beer drinkers, suggesting that they were somewhat effete, and real beer drinkers still liked tasteless beer. That was not only as stupid as it appears, but it ignored the fact that ABInBev had just bought out Elysian Brewing that produces a version of the exact effete beer being mocked in the add.  ABInBev also owns Goose Island Brewing in Chicago. We’ve had several beers from Goose Island since the merger and they are still great beers. (If you get a chance, try their Sofie, a tart, effervescent Saisson that seems to mimic Champaign.) If the industrial brewers can learn to keep their hands off the brewery, and they seem to be doing that, the infusion of new money and access to the industrial breweries distribution networks should mean more beer choice for consumers.  Your Bushwakker has no expectation of major changes in ownership in the foreseeable future. 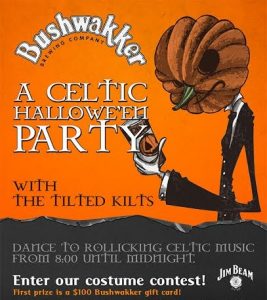 A nervous taxpayer was unhappily conversing with the CRA tax auditor who had come to review his records. At one point the auditor exclaimed, "Mr. MacGregor, we feel it is a great privilege to be allowed to live and work in Canada. As a citizen, you have an obligation to pay taxes, and we expect you to eagerly pay them with a smile." "Thank goodness," returned MacGregor, with a giant grin on his face from ear to ear. "I thought you were going to want me to pay with cash."