Oct. 1 - Oct. 3: Bushwakker Oktoberfest Week. The official Oktoberfest celebration in Munich will still be going strong as the Bushwakker weeklong Oktoberfest celebration continues. Enjoy a unique German-themed meal special every day of the week as well as a pint of our Bushwakker brewed Oktoberfest lager, Harvest Lager. A selection of German bottled beers and a special order keg of Hofbrau Oktoberfestbier imported from Munich, Germany will also be available. Prosit! Oct. 1: LB Distillers Tasting Event. Tickets now on sale! Enjoy an evening evaluating six products from Saskatoon’s Lucky Bastard Distillery. Some very innovative distillation products will be sampled including Hemp Hop Ale, Scotch Cream Ale, Chocolate Vanilla Porter, Naked Single Malt (Un-aged). An overview of the distillation process as well as a recounting of the distillery’s initial business name rejection in 2010 to their incredible growth they have achieved in 2015. Only 50 tickets will be made available. Only $20 each. 7:00 PM. Oct. 2: First Firkin Friday. We’ve seen quite a few “gushers” over the last few months. Don’t miss this longstanding Bushwakker tradition where on the first Friday of every month we present a special brew served in a firkin. The small keg is paraded around the pub in a procession lead by a piper from The Regina Police Services Pipes & Drums. A volunteer is selected to tap the firkin and that’s when things can get pretty wet and messy. Delicious, fresh beer and a suds-soaking spectacle awaits! 5:30 PM. 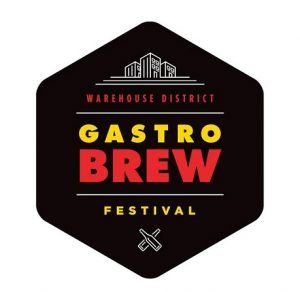 Oct. 3: Warehouse District Gastro-Brewfest. Taking place in the lot directly south of the Bushwakker. A brand new event celebrating culture, art and entertainment in the Warehouse District. Main event area will feature a beer garden featuring local brewers that call the Warehouse District home; a main stage with live entertainment featuring Regina bands, artists and dance groups. A kids area; participation/demo area. Plus great events, sales and promotions throughout the District. We will be there pouring a few Bushwakker brands as will fellow warehouse district brewers, Rebellion and District Brewing. A number of food trucks will also be at the site. Try pairing some of the craft beers with your favourite foods. Event runs from 11am - 9pm. Oct. 5: Monday Night Jazz & Blues: The Ministry of Groove. Great 1970’s jazz funk and beyond from this seven-piece act. 8:00 PM. Oct. 7: Wednesday Night Folk: Michelle Boudreau and her Fantastic Friends. Singer/songwriter, spoken word artist, gardener and mom was born into a musical family of gypsies, clowns and storytellers.  Former Regina resident will be rolling through with a group of gals, playing toe tappin’ tunes from days old and new. www.michelleboudreau.ca. 9:00 PM. Oct. 7: ALES Monthly Meeting. If you are thinking about getting into the craft of home brewing or would like to brush up on your brewing skills, the ALES Club is for you. Unique topic presentations each month as well as general discussions on how to make and appreciate better beer. This month’s topics will be: American Stout, Using Software to Design Recipes and Brewing for the Seasons. New members are always welcome. Meeting takes place in the Bushwakker basement private clubroom. 8:00 PM. Oct. 12: Closed For The Holiday. Happy Thanksgiving!

The Bushwakker has been selected as one of five finalists for the “Cornerstone” category in the 2015 ABEX Awards presented by the Saskatchewan Chamber of Commerce. That category relates to both our community involvement and our role in bringing change to our city and province. This is the only ABEX award in which the final decision is made based on popular vote! We are the only business representing Regina. Voting started on September 24th and continues right up to the gala awards on October 24th. You can view our awards submission at https://www.bushwakker.com/cornerstone. If you like what we are doing in your community, please vote for us at www.abexcornerstone.com . You can vote once every 24 hours. Please note that in order to vote you will be prompted to register at the website first, then will be sent a confirmation email, and then your voting capability begins. If you would like to support us and your city, vote and vote often!

Candace Tirk (neePastl) Candace was born and raised on a farm near Watson Sk..  Nature has always provided her with a source of joy and comfort and has inspired many of her creative adventures. The medium of painting has moved with in her for many years and in 2000, she began to explore painting in acrylics, oils and watercolors. In 2009 Candace self-published a book called, "Messages from the Heart, a Journal for self-discovery". This book contains inspirational verses she has written as well as some of her paintings and photos.

Sometime last year or earlier it appears that the Government of Saskatchewan had adopted a policy of giving the Saskatchewan population just a little taste of the sale of beverage alcohol by the private sector and waiting to see how they reacted. The public first accepted the beer and wine stores set up in the two larger Saskatchewan towns. Next the government set out a survey of attitudes toward what might be the next step, which has led to two private liquor stores in both towns offering all types of beverage alcohol. We supported that approach, which will let the public vote with their feet as to where they want to shop. If the union-controlled SLGA stores wish to show that they can compete, they have the opportunity to do just that. This has already led to some improvement in the service at SLGA stores. However, many who filled out the form added extensive comments, including ourselves. The problems go much deeper than the degree of privatization. The SLGA seems to think that the calendar stopped sometime in the 1980’s. Beer then was still a simple commodity made in large vats, sterilized, packaged within two or four weeks, hauled to an SLGA warehouse or the producer’s own warehouse, then to SLGA stores, where it was purchased by consumers who took it home and cooled it for the first time and consumed it within days. Now they must deal with roughly 80 beers styles, thousands of breweries, and even unsterilized beer. They seem to be dragging their feet. Their beer knowledge is such that they buy strange beers that don’t sell well anywhere, and not the modern classics that would, even in Saskatchewan. The tax structure (masqueraded in the form of mark-ups) is set up so that any microbrewery must suddenly pay huge new amounts to the SLGA just as they achieve the economy of scale to pay something back to the brewery’s investors. Existing micros are hoping that by the time they get to that point, reason will prevail. (We were shocked to recently learn that the Bushwakker, a brewpub, actually sells more beer in Saskatchewan than does the provinces oldest microbrewery!) The craft beer industry is still in its infancy in SK and provincial policy seems determined to keep it that way. Most of the guest beer that the Bushwakker uses for everyday uses or special events is purchased from warehouses in AB controlled by distributors. The purchase goes through the offices of the SLGA and may take months. If SK allowed such warehouses here, the time would be shorter, and SK would collect more taxes. If the SK government removes barriers, barriers which serve no purpose whatsoever, the craft beer industry will have a chance to grow and bring the province into the third millennium, probably kicking and screaming. The public will have access to a modern liquor regulatory and distribution scheme, which involves more choice and informed service. The current situation leads to negative comments on beer blogs about a place in North America living in the past. Jokes about Saskatchewan hicks, like Newfie jokes, will be less common. (Yes, surveys have been carried out in the past on Saskatchewan’s image in the rest of Canada.) The people of Saskatchewan are finally standing up and demanding respect. First, and presumably as a consequence of the response of many of us to the aforementioned questionnaire, the government hired a company to review the practices of the SLGA. We still had to argue that complete restructuring is necessary, not just tinkering with the present system. For instance, we should not let the SLGA be its own regulator. In addition to the study commissioned by the provincial government, the next initiative with regard the Saskatchewan liquor regulatory and distribution system was the formation of the group that had a press conference recently at the Bushwakker. It was formed to lobby for a range of changes, including to regulations pertaining to craft beer but also changes to other parts of the system. Their first issue was fair pricing. That was not a major issue for the Bushwakker because we buy most of our guest beer from outside the province. The third initiative intended to get the Saskatchewan liquor industry out of the past was that all brewers in the province have formed the Saskatchewan Brewer’s Association, to lobby for a number of issues that affect the economy of the province and our beer drinker’s access to choice and service. Modernization should produce more revenue for the province. All mark-ups and taxes are collected regardless of who is the retailer, but the economics of good management and proud employees means either more new cash for the government or lower prices for the customer. The investors in the companies that own the private stores must be paid back for the use of their money, but there should still be enough left over to do that. (If you don’t agree I can provide a 70 page meta study from 400 individual studies from all over the world showing the savings associated with privatization in general. 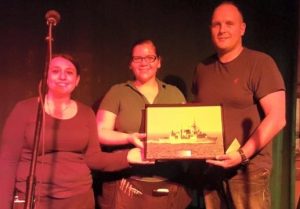 Kyle Ruttan of the HMCS REGINA presents a gift from the crew, officers and command
team to Bushwakker night manager, Rayna Hart and supervisor, Kristy Engele.
Navy Frigates, like the HCMS Regina, make visits to their namesake cities to raise awareness of the navy and recruit. The Regina’s home in Esquimalt is next to where the craft beer industry started in Canada and ship’s company were familiar with real beer even before the Bushwakker was established. But after we opened they discovered us and made us their “forward operating base” for Regina. After a day of interviews, schmoozing with local leaders and students, they gathered at the Bushwakker to have a beer and discuss the day’s work. They named the regular sailors mess on the Regina “Bushwakker West” and for a while even sold Bushwakker beer in it. That’s why we have so much Navy paraphernalia behind the bar. We have spent time on the ship twice as guest. This interaction eventually led to good relations with the Army as well but that’s another story. Several of the ship’s senior people were in town over the weekend and added to our “HMCS Regina” collection.

Time Out: Even More Marital Bliss

Three mates are down at the pub. Bill and Joe are arguing about the amount of control they have over their wives, while the third bloke, MacGregor, says nothing. After a while, Bill turns to MacGregor and says, "Well, what about you? What sort of control have you got?" "I'll tell you," MacGregor replies. "Just the other night my missus came crawling to me on her hands and knees." The other two were absolutely amazed. "What happened then?", Joe asked. "She said, 'Get out from under the bed and fight like a man!!!"