Our September wine features are from the Red Rooster Winery in BC: The red is Hen House Ruffled Red, a cabernet/merlot blend. The white is Hen House Sly White, a sauvignon blanc/riesling/pinot gris/semillon/ chardonnay/orange muscat blend.  Both are $7.95 for a glass and $22.95 for a half litre. Our guest draught tap is currently pouring the Red Racer Maple Bacon Ale from Surrey, B.C. $7.50 for a pint. Our Motherwell Red Fife Witbier proved to be extremely popular and sold out in only one week from its official release. Our traditional witbier offering, Honey Thistle Wit is now on tap and in our offsale. If you were planning to join us on Labour Day we hope that you checked our facebook page before trekking down to the Bushwakker. When Bushwakker staff arrived early on the day the power was out. It’s not only the brewery workers who start the day well before 6:30 AM, our kitchen also starts preparing the day’s food at the same time. The brewery starts early so that the spent grains from the day’s brew can be removed from the brewhouse before we open. Unlike most restaurants, food at the Bushwakker is prepared on premise, just like the beer. The best information available in the morning was that the power would return around 1:00 PM. Even if that were correct, we would not be able to serve most of our menu items because they wouldn’t be ready, so both kitchen and serving staff were sent home. As it happened, power was restored around 11:00 but it was then too late for us to bring people back and recover. We apologize for the inconvenience!

Sept. 14: Monday Night Jazz & Blues. ‘round Midnight. Popular act plays popular jazz and adult contemporary tunes featuring lead singer, Carl Williams. 8:00 PM. Sept.16: Wednesday Night Folk. Theresa & Carol. Talented acoustic guitar duo plays classic folk tunes. 9:00 PM. Sept. 19: Riders vs. Ottawa. Be sure to stop by the Bushwakker before, during or after the game. Enjoy our RedBlack Burger & a Pint feature and `devour` the competition. Kick-off is at 7:00 PM. Sept. 21: Monday Night Jazz & Blues. National award-winning blues artist Whiteboy Slim returns with his one man rhythm section. 8:00 PM. Sept. 23: Wednesday Night Folk. Chad Kichula Trio. Americana folk inspired by Steve Earl and Bruce Springsteen. 9:00 PM. Sept. 26:  CJTR Radiothon 2015 Kick-off Concert.  Radiothon is one of CJTR's major fundraising events and it all kicks off at The Bushwakker. Come out and enjoy an evening of fine music while showing your support for Regina's favourite community radio station. There is no admission charge at the door; however, donations to Radiothon will be gratefully accepted. Get more information on the week-long pledge drive by tuning in to 91.3FM CJTR or visiting www.cjtr.ca. Four local acts will provide the entertainment for the evening.  Ray Bell is a seasoned singer-songwriter and accomplished guitarist who has been entertaining audiences for decades. Bradford (Brad Papp and Mark Radford) present a varied repertoire that showcases their skillful guitar-playing and stellar vocal harmonies. Instrumentalists Ben Winoski and Jeff Storry will dazzle you with  their  dexterity on the guitar.  MYLA is a songwriter and vocalist that performs an array of musical styles; she will appear as an acoustic trio for this show. CJTR programmers, Dane Imrie (The Capital) and Ben Valiaho (Off-Stream) will be your emcees for the evening. 7:30 PM Sept. 27: Riders vs. Montreal. Yet another rare Sunday Bushwakker business day. Kick-off is at 2:00 PM. Be sure to drop by the Bushwakker and enjoy our Alouette Burger & a Pint feature before, during or after the game. Go Riders go! Sept. 28: Monday Night Jazz & Blues. AZ Paris. Veteran blues duo returns for an encore performance. 8:00 PM. Sept. 30: Wednesday Night Folk. Billarney. Enjoy one of the largest acoustic Celtic acts to ever grace the Bushwakker stage. 9:00 PM. Oct. 1: LB Distillers Tasting Event. Enjoy an evening evaluating a variety of products from Saskatoon’s Lucky Bastard Distillery. White spirits, brown spirits and even some liqueurs will be sampled. An overview of the distillation process as well as a recounting of the distillery’s initial business name rejection in 2010 to their incredible growth they have achieved in 2015. Only 50 tickets will be made available. Only $20 each. 7:00 PM. 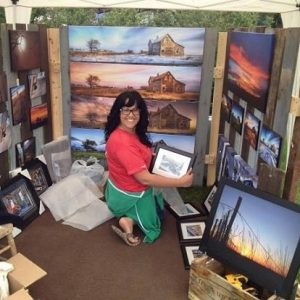 Our Local Arts Wall featured artist for September is Tina Hudson. Be sure to stop by this month to see her creative and innovative works! Her bio follows: Being a Born & Raised Saskatchewan Girl, I Grew up in The Small Town of Ceylon, Sask. I have spent my last 23 years in Weyburn, Sask. I use Photography to capture reflections of what I See/Vision and turn my ideas into a piece of Art on Paper/Canvas, to ultimately share with all. Not only am I inspired by the subject, but also in how I can take advantage of the Light and Angles to make the scene come alive. I have always had a love for photography. The purchase of my 1st digital camera in 2003 set of a spark in me that has yet to be dimmed. From there, onto an SLR with my best friend(my tripod), and multiple photo workshops. There was no holding me back. Many road trips as a passenger gave me the ability to enjoy the landscapes, composing scenes in my memory for future use, to chase the skies,  waiting for  the  perfect sun flare,  the  amazing sunset, the golden hues and colours to make my photo's come alive. Each day  with my camera is an endless opportunity to see what I can create for tomorrow. There's nothing more exciting than heading out on a Beautiful Saskatchewan day to shoot, and then hurry home to download and see what my eye had captured today. Imagine...all this from a viewfinder?

Are Women Better Tasters Than Men?

Eliza Barclay    August 31, 2015
If, like me, you're an amateur taster of beer and wine, inevitably you've asked yourself why you don't taste that hint of raspberry or note of pine bark that someone else says is there. Genetics certainly have something to do with why we have different perceptions of tastes. Scientists have shown there's a genetic component to how we experience bitterand sweet flavors, as we've reported. And "supertasters," who seem to be born rather than made, are said to experience a lot of tastes more intensely. But what if your ability to perceive nuances of flavor is related to something as simple as your gender? Turns out that, anecdotally, this is something people in the beer and wine worlds discuss all the time. I first heard it from Douglas Constantiner in June at a beer-and-food-pairing event in Washington, D.C., hosted by the Brewers Association. Constantiner is a co-founder of Societe Brewing Co. in San Diego. I was sipping Societe's IPA, The Pupil, when Julia Herz, the association's craft beer director, mentioned genetic predisposition and taste. That prompted Constantiner to boldly state, "Women are predisposed to have a better sense of taste and smell than men."  Really? I said, as I swirled the remaining inch of beer in my glass, sniffing again for notes of mango and guava that I couldn't quite identify. Yes, he said, science says so. He went on: "I see that women need a lot less training to get to the same level of tasting as men. Like my wife and [my co-founder Travis Smith's] wife — they can pick up stuff naturally. I'm like, 'I've been doing this for eight years, training — not just making beer and drinking it, but training" — and meanwhile, his and Smith's wives readily picked up on lots of aromas in the beer. Weeks later, Constantiner's comment lingered in my mind.  Could it be true? For such burning questions of sensory science, I turned to the Monell Chemical Senses Center. Sure enough, researchers there have tried to get at gender differences in the sense of smell — which, of course, has implications for sense of taste: A lot of our experience of food and drink actually happens through our nose. Paul Breslin, a member of the center and a professor at Rutgers University, studies the genetic basis of human oral perception. Back in 2002, Breslin and a couple of colleagues got interested in the phenomenon of how some individuals can become increasingly sensitive to certain odors over time, detecting them at lower and lower concentrations. Earlier studies had suggested there is a gender component to this phenomenon, and Breslin and his colleagues wanted to look into it further. They trained a group of men and women of various ages to identify two specific odors. The researchers then had both the men and the women smell the odors at increasingly diluted concentrations. And they found something quite interesting, as they reported in a paper published in Nature Neuroscience in 2002: The women who were of reproductive age saw their sensitivity to one of the odors increase by an average of five orders of magnitude. Crazy, right? "It was such a bizarre observation," Breslin says. So bizarre they decided to try to replicate the results. For a second study, which appeared in the journal Chemical Senses in 2005, the researchers ran more experiments: They trained men and women to detect more odors. And they tested post-menopausal women and age-matched men, as well as prepubescent boys and girls. And again they found that only women of reproductive age were able to detect multiple odors at increasingly lower concentrations over time. But this time, they found that the sensitizing effect was even greater: Women of reproductive age could, with some training, identify odors at concentrations up to 11 orders of magnitude lower than men who'd started out with similar experience with the smell. To be clear, 11 orders of magnitude is huge. READ MORE 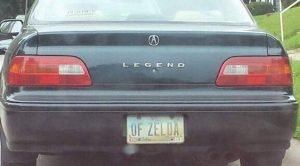 Jack was sitting in an airplane when another guy took the seat beside him. Jack noticed that the guy was moaning and shaking. "What's wrong?" asked Jack. "I've been transferred to New Orleans, Louisiana," the guy answered. "There's crazy people in New Orleans. They have shootings, rapes, robberies, gangs, race riots, drugs . . . . the highest crime rate." "Hold on," Jack interrupted. "I've lived there all my life. It's not as bad as the media says. Find a nice home, go to work, mind your own business, enroll your kids in a good school and it's as safe as anywhere in the world." The other passenger relaxed and stopped shaking for a moment and said, "Oh, thank you. I've been worried to death, but if you live there and say it's OK, I'll take your word for it. What do you do for a living?" "Me?" said Jack. "I'm the tail gunner on a Bud Lite truck."