Our September wine features are from the Red Rooster Winery in BC:  The red is Hen House Ruffled Red, a cabernet/merlot blend.  The white is Hen House Sly White, a sauvignon blanc/riesling/pinot gris/semillon/ chardonnay/orange muscat blend.  Both are $7.95 for a glass and $22.95 for a half litre. Our guest draught tap is currently pouring the Saugatuck Serrano Pepper Amber Ale from Michigan for $8.50 a pint.  Next up will be the Red Racer Maple Bacon Ale from Surrey, B.C. The Bushwakker participated in the Grand Threshing Day/Symphony Under The Sky event at the Motherwell Homestead national historic site last Saturday. Attendance far exceeded what was expected. The Bushwakker was asked to brew a commemorative beer incorporating the historic Red Fife wheat in the recipe. A few of William Richard Motherwell’s descendants were on hand to take part in the introduction of the special commissioned beer by participating in a procession and tapping of a firkin of the Motherwell Red Fife Witbier. The beer sold out at the site but will be on tap at the Bushwakker for a short time. Limited edition 650 ml bottles of the Motherwell beer are also available in our offsale. The winner of our Blackberry Mead Package Draw at the event was Chris Soucie. 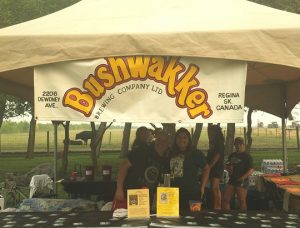 Sept. 4: First Firkin Friday. Enjoy the pomp and circumstance as a piper from The Regina Police Services Pipes & Drums leads a small keg throughout the pub in a wee procession before birthday boy and long-time Bushwakker supporter, Mr. Andrew Gilbert, wields the mighty ``Firkin Wakker`` handmade wooden maul and attempts to tap the firkin in one mighty blow. Should be a messy one! The spectacle begins at 5:30 PM. Plan to arrive early in order to get a front row beer drenching. Sept. 6: Labour Day Classic Burger Battle. There are only a few Sundays each year when the Bushwakker is open and this is one of the big ones!  We welcome our many  Manitoba friends who make their  annual pilgrimage to the Bushwakker and Mosaic stadium. This is also the only day of the year where you can choose from either our Bomber Burger & a Pint feature or our Rider Burger & a Pint feature. History has shown that the burger that sells the best prior to the game is a strong indicator as to which team will win the Labour Day Classic. We open at 11:00 AM. Sept. 7: Monday Night Jazz & Blues. The Bushwakker will be open on Labour Day Monday. We invite our many Manitoba friends to stop by before making their return trip home. For those looking to end off their Labour Day weekend in a big way, we invite you to witness the largest band to ever grace the Bushwakker stage. Enjoy big band jazz with the 20 plus members who comprise The Jazz Band-Its. 8:00 PM. Sept. 9: Wednesday Night Folk. Bradford. Popular folk guitarists duo featuring Brad Papp and Mark Radford. 8:00 PM. Sept. 14: Monday Night Jazz & Blues. ‘round Midnight. Popular act plays popular jazz and adult contemporary tunes featuring lead singer, Carl Williams. 8:00 PM. Sept.16: Wednesday Night Folk. Ben Winoski and Jeff Storry  demonstrate their acoustic guitar prowess. 9:00 PM. Sept. 19: Riders vs. Ottawa. Be sure to stop by the Bushwakker before, during or after the game. Enjoy our RedBlack Burger & a Pint feature and `devour` the competition. Kick-off is at 7:00 PM. Sept. 21: Monday Night Jazz & Blues. National award-winning blues artist Whiteboy Slim returns with his one man rhythm section. 8:00 PM. Sept. 23: Wednesday Night Folk. Chad Kichula Trio. Americana folk inspired by Steve Earl and Bruce Springsteen. 9:00 PM.
Sept. 26:  CJTR Radiothon 2015 Kick-off Concert.  Radiothon is one of CJTR's major fundraising events and it all kicks off at The Bushwakker. Come out and enjoy an evening of fine music while showing your support for Regina's favourite community radio station. There is no admission charge at the door; however, donations to Radiothon will be gratefully accepted. Get more information on the week-long pledge drive by tuning in to 91.3FM CJTR or visiting www.cjtr.ca. Four local acts will provide the entertainment for the evening.  Ray Bell is a seasoned singer-songwriter and accomplished guitarist who has been entertaining audiences for decades. Bradford (Brad Papp and Mark Radford) present a varied repertoire that showcases their skillful guitar-playing and stellar vocal harmonies. Instrumentalists Ben Winoski and Jeff Storry will dazzle you with their dexterity on the guitar. MYLA is a songwriter and vocalist that performs an array of musical styles; she will appear as an acoustic trio for this show. CJTR programmers, Dane Imrie (The Capital) and Ben Valiaho (Off-Stream) will be your emcees for the evening. 7:30 PM Sept. 27: Riders vs. Montreal. Yet another rare Sunday Bushwakker business day. Kick-off is at 2:00 PM. Be sure to drop by the Bushwakker and enjoy our Alouette Burger & a Pint feature before, during or after the game. Go Riders go! Sept. 28: Monday Night Jazz & Blues. AZ Paris. Veteran blues duo returns for an encore performance. 8:00 PM. Sept. 30: Wednesday Night Folk. Billarney. Enjoy one of the largest acoustic Celtic acts to ever grace the Bushwakker stage. 9:00 PM. Oct. 1: LB Distillers Tasting Event. Enjoy an evening evaluating a variety of products from Saskatoon’s Lucky Bastard Distillery. White spirits, brown spirits and even some liqueurs will be sampled. An overview of the distillation process as well as a recounting of the distillery’s initial business name rejection in 2010 to their incredible growth they have achieved in 2015. Only 50 tickets will be made available. Only $20 each. 7:00 PM.

Can Craft Beer Really Be Defined?  We’re About to Find Out

Tony Naylor, August 27/2015 Next month, possibly in a secret underground bunker, but more likely in a pub, the leading lights of new wave British brewing will meet to do something that, so far, beer geeks have found impossible. They willdefine what craft beer is in the UK. This attempt by the new United Craft Brewers (UCB) to codify craft is essential in their mission to, “promote and protect the interests of British craft brewers, their beers and beer enthusiasts.” UCB has been established by the scene’s big guns – Brewdog, Beavertown, Magic Rock and Camden Town Brewery are among its founders – but, nonetheless, and despite the upbeat “Hey guys!” tone of their first public statement, I cannot help but think they have set themselves a thankless task, and a pointless one. Defining what is and isn’t craft beer is notoriously difficult. You cannot restrict it to a list of ingredients, like the historic German purity laws, because modern brewers want to use everything from coffee grounds to chillies in their beers. You cannot define craft beer in terms of how it is packaged, as Camra did with real ale, because it already comes in cask, keg, can, bottle and – who knows? – probably Tetrapak cartons and PET bottles soon, too. Nor is an ambitious company such as Brewdog (it is poised to hugely increase its brewing capacity and already owns 35 bars) likely to signup to something that restricts craft breweries to a certain size, be that in terms of volume production – as craft breweries are primarily regulated in the US – financial turnover or diversification of the company’s interests. Yes, a definition of craft could outlaw certain practises, such as the addition of cheap adjuncts such as corn and rice to beers, or pasteurisation, but even that would run contrary to the spirit of craft which has, repeatedly, overturned the shibboleths around beer. Tell a craft brewer you cannot do something and, invariably, they will come back next week with a flavour-packed beer that proves you can. Craft beer is antithetical to rules. Even those things which UCB should logically demand of its members (a ban on third-party contract brewing; no-membership for “small breweries” that are owned / funded by multinationals), would pose immediate issues for its founders. Brewdog is about to (albeit as a one-off stunt), effectively contract brew a beer in the UK on behalf of the US brewery Stone while fellow UCB founders James Clay distribute Founders’ beers, a company 30% owned by Mahou San Miguel. You can see the thinking behind UCB. Loads of big breweries are piling into the sector with sub-standard beers that trade on the language and design of craft. They are cashing in on a scene they did nothing to cultivate and exploiting a cachet they have not earned. If left unchecked, some argue, they will devalue, if not destroy, what craft – in terms of encouraging experimentation, craftsmanship, big flavours, a quality product – has achieved. In principle, trying to stymie that infiltration is a good thing. Except that, legally, how will you ever stop big breweries using the term “craft beer”? And what if Guinness or Molson Coors suddenly produced a stunning mass market beer? It is unlikely, but not impossible. Read more 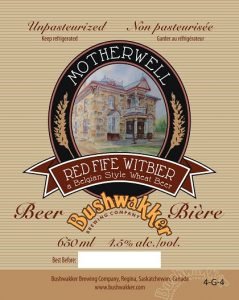 Time Out: Butch the Rooster

Sarah was in the fertilized egg business.  She had several hundred young pullets and ten roosters to fertilize the eggs. She kept records and any rooster not performing went into the soup pot and was replaced. This took a lot of time, so she bought some tiny bells and attached them to her roosters.   Each bell had a different tone, so she could tell from a distance which rooster was performing. Now, she could sit on the porch and fill out an efficiency report by just listening to the bells. Sarah's favourite rooster, old Butch, was a very fine specimen but, this morning she noticed old Butch's bell hadn't rung at all! When she went to investigate, she saw the other roosters were busy chasing pullets, bells-a-ringing, but the pullets hearing the roosters coming, would run for cover. To Sarah's amazement, old Butch had his bell in his beak, so it couldn't ring.  He'd sneak up on a pullet, do his job, and walk on to the next one. Sarah was so proud of old Butch, she entered him in a Show and he became an overnight sensation among the judges. The result was the judges not only awarded old Butch the "No Bell Peace Prize" they also awarded him the "Pulletsurprise" as well. Clearly old Butch was a politician in the making. Who else but a politician could figure out how to win two of the most coveted awards on our planet by being the best at sneaking up on the unsuspecting populace and screwing them when they weren't paying attention?

Soup & Sandwich Special is $11.95.  All hot specials are $15.95, except where noted, and include a serving of soup du jour,chopped, or Caesar salad.