Our June premium red wine is Altano Douro DOC (a blend of touriga franca, tinta roriz and tinta barroca grapes) from Portugal; $7.95 for a glass and $22.95 for a half litre.  The white is Mud House Sauvignon Blanc from New Zealand; $8.95 for a glass and $26.95 for a half litre. Our guest draught tap is currently pouring the WheatBurst American style wheat beer from the Black Bridge Brewery in Swift Current, Saskatchewan. $7.95 pint. Next up is the Moo Drool Brown Ale (branded as Moose Drool in the United States) from the Big Sky Brewery on Missoula, Montana. The 2nd offering of our Single Hot Series of Screamin’ Mosquito Chili Beer is now available. This offering features the Green Thai Chili Pepper. It is not as hot as the previous Scotch Bonnet Pepper version but still has some nice heat in the finish. A very drinkable chili beer. Next up will be our Habanero chili beer.

Looking for a last minute gift for Father’s Day? Help dad “Tie One On” this year and give him a Bushwakker Father’s Day Growler Gift Box. Choose from either a stainless steel or glass growler. Each gift box also includes two Bushwakker etched pint glasses and a gift certificate redeemable for a free regular growler fill. Each growler is also handsomely adored with a brand new snazzy tie!

June 19: Riders vs Stampeders. Kick off 7:30 PM. The first home game of the season may be an exhibition game but many folks like to see the promise this year’s team has to offer. Be sure to stop by The Bushwakker before, during or after the game and enjoy our Stampeder Burger & a Pintfeature for only $16.95. Think of it as "devouring" the competition. Good luck in 2015 Riders! June 22: Monday Night Jazz & Blues. ‘round Midnight. Popular act plays popular jazz featuring new lead singer, Carl Williams. 8:00 PM. June 24: Wednesday Night Folk. Katie Miller Trio. Saskatchewan singer songwriter delivers folk rock songs from her debut album, Silverflower, along with covers of her musical influences including Neil Young and The Tragically Hip. 9:00 PM. June 27: Riders vs Bombers. Kick off is at 6:00 PM. The first regular home game of the season promises to be a good one. Always nice to see our many Manitoba friends who often visit us for The Labour Day Classic in September. Help cheer on the Riders by devouring our Bomber Burger & A Pint feature before, during or after the game! Only $16.95. June 29: Monday Night Jazz & Blues. AZ Paris. Blues duo plays raw new original blues with a twist, and cover songs that are done with justice. 8:00 PM. Special July Beer Tasting! July 23: A Super Summer Specialty Stout Spectacular –A stout tasting event in the middle of a sweaty Saskatchewan summer? You bet! Evaluate approximately ten specialty imported stouts showcasing some very uncommon black beers. Espresso milk stout, coffee stout, vanilla oatmeal stout, stout made with oysters, hot spicy stout, pinot noir barrel-aged stout, maple stout, raspberry Russian imperial stout, imperial oatmeal stout made civet cat coffee droppings and even the number one ranked stout in the entire world according to Ratebeer.com! Only 50 tickets will be made available. 7:00 PM.

At the Bushwakker we have wanted to be able to serve real BBQ because it’s an excellent accompaniment for craft beer. However, we found the code problems associated with cooking with smoke in a heritage building insurmountable.  We tried contracting the cooking in bulk to Prairie Spice and Smoke but that brought its own problems. Nevertheless we have urged Rob Reinhardt of Prairie Spice to bring back the Pile-o-Bones BBQ competition. (He has already assisted people in other Saskatchewan communities in organizing an event.) The competition did occur twice several years ago but faltered. Now that he has been able to resurrect the event in Regina we set out to give him all the support we could. Bushwakker founder Bev Robertson, Bushwakker founder, has been a BBQ judge around western Canada and the South east U. S. and served as a judge at this event. Three people from the Bushwakker kitchen offered to form a cooking team, in spite of the fact that they had almost no experience and no equipment and enter the competition. 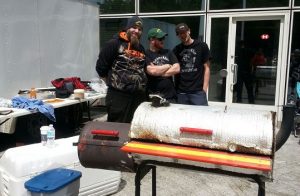 Sous Chef Dave DeBacker and cooks Travis Milford and Shane Boyes make up the Bushwakker Brew and Q BBQ team. DeBacker cooked with Robertson and Robertson’s home BBQ equipment on the previous weekend and used his cooking equipment in the competition, one unit of which is shown above. In spite of being the ultimate novices, they achieved 13th out of 22 entries for their brisket. The competition awarded them the Memorial prize in recognition for their efforts. Onward and upward!

3 beer myths that may be costing you money

There are many myths about beer floating around. Some of them may cause you to choose one beer over another for the wrong reasons. Some beer myths may end up costing you money, too. If you want to get the most out of your beer budget, get your facts straight about these three commonly held beer myths. If cold bottled or canned beer gets warm, it becomes skunked. I can’t tell you how many times I've had a refrigerator stuffed with leftover beer after a party because it had been on ice. I thought it would become ruined or “skunked” if it came back to room temperature. Not only was I wrong about it getting ruined, I was wrong about what the term "skunked" means. I asked Tim Kelly, brewmaster at Tun Tavern in Atlantic City, New Jersey, to help me get my facts straight about fluctuating beer temperatures. He told me that it’s not a problem for most beers that have been refrigerated or submerged in ice all day in a party bucket to come back to room temperature. The fluctuation in temperatures for most beers won’t make a difference in the beer’s quality. Additionally, "skunked" isn’t the right term to use for temperature fluctuations. Skunked is used to describe beer that has been “light struck” and not beer that's gone from cold to warm. Beer that is exposed to UV light undergoes a chemical change that causes it to have an unappealing smell reminiscent of a skunk or wet cardboard. The smell, not the temperature, will tip you off to a skunked beer. Beer in clear or green bottles is more at risk than beer in brown bottles. Bottled beer that sits openly under florescent lights in a store or even in your home is at risk. Canned beer does not get exposed to light so it does not get skunked. If you’re throwing away previously cold beer because it came back to room temperature and you think it’s ruined, you’re throwing away your money. It can be chilled again and should be fine to drink. If you’re exposing your bottled beer to sunlight or indoor UV lights, you may be ruining it, and that's where your problems will occur. Bottled beer is better than canned beer. Traditionally, bottled beer has been preferred to canned beer for two basic reasons: the belief that bottled beer tastes better than canned beer and the perception that bottled beer is classier. Beer lovers are starting to realize this just isn't true. When Huffington Post did a blind taste test using four beers that came in both bottles and cans, their tasters preferred the canned beer three out of four times. They only identified the canned beer about half the time, which could be contributed to guessing correctly. Add the possibility that bottled beer can get skunked and canned beer cannot, and the bottled-beer-is-better belief starts to crumble. The stigma surrounding canned beer is crumbling, too. Craft breweries are embracing cans, and beer lovers are, too. Traditionally, bottled beer costs more per ounce than canned beer. Why pay extra for beer in bottles if the same exact beer is less expensive in a can? When it comes to craft beer, though, check your prices. The setup for a canning line can be expensive, so smaller breweries that are adding canning lines may not be able to charge less for cans. The cost to the environment is different when it comes to bottles versus cans, also. According to the Aluminum Association, “aluminum cans are the most sustainable beverage container on virtually every measure.” Consumers recycle 56.7 percent of their aluminum cans. They recycle only 34.1 percent of their glass bottles. Those recycled cans are most often recycled back into aluminum cans, and making an aluminum can from recycled aluminum takes only 8 percent of the energy it takes to produce a new aluminum can. Beer and fine food don’t pair well. Many people don’t order beer to go with their meal at a good restaurant; they order wine. Beer is often associated with eating pizza or burgers off the grill but not with fine foods. That association needs to change. Beer complements a surprising number of foods. Craft Beer has an extensive pairing chart that can help you pair what’s on a restaurant's beer menu with what’s on its entrée menu. These are just a few of the suggestions. • Pair roast duck with a doppelbock • Pair crab cakes with a hefeweizen • Pair salmon with a classic pilsner If you’re pairing your food with wine instead of beer in a restaurant, it’s definitely going to be more expensive. If you love beer and can learn to pair it with good food, you might see a noticeable difference in your bill at the end of a good meal. 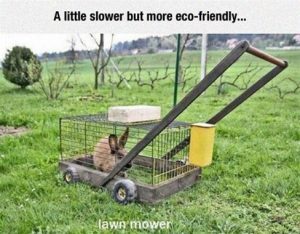 A man walked into a crowded doctor's office. As he approached the desk, the receptionist asked, "Yes sir, may we help you?" "There's something wrong with my dick," he replied. The receptionist became aggravated and said, "You shouldn't come into a crowded office and say things like that." "Why not? You asked me what was wrong and I told you." he said. "We do not use language like that here," she said. "Please go outside and come back in and say that there's something wrong with your 'ear' or whatever." The man walked out, waited several minutes and reentered. The receptionist smiled smugly and asked, "Yes?" "There's something wrong with my 'ear'," he stated. The receptionist nodded approvingly. "And what is wrong with your ear, sir?" "I can't piss out of it." the man replied. Mr. Smith goes to the doctor's office to collect his wife's test results. The lab tech says to him, "I'm sorry, sir, but there has been a bit of a mix-up and we have a problem. When we sent the samples from your wife to the lab, the samples from another Mrs. Smith were sent as well and we are now uncertain which one is your wife's. Frankly, that's either bad or terrible." "What do you mean?" "Well, one Mrs. Smith has tested positive for Alzheimer's disease and the other for AIDS. We can't tell which is your wife." "That's terrible! Can we do the test over?" asked Mr. Smith. "Normally, yes. But you have an HMO, and they won't pay for these expensive tests more than once." "Well, what am I supposed to do now?" "The HMO recommends that you drop your wife off in the middle of town. If she finds her way home, don't sleep with her."