Our June premium red wine is Altano Douro DOC (a blend of touriga franca, tinta roriz and tinta barroca grapes) from Portugal; $7.95 for a glass and $22.95 for a half litre.  The white is Mud House Sauvignon Blanc from New Zealand; $8.95 for a glass and $26.95 for a half litre. Our guest draught tap is currently pouring the Mikkeller Draft Bear Imperial Pilsner from Denmark. $9.95 for a pint.  This one is almost gone.  Next up is an Imperial IPA offering from Black Bridge Brewing in Swift Current, Saskatchewan.

Looking for a unique gift for Father’s Day? Help dad “Tie One On” this year and give him a Bushwakker Father’s Day Growler Gift Box. Choose from either a stainless steel or glass growler. Each gift box also includes two Bushwakker etched pint glasses and a gift certificate redeemable for a free regular growler fill. Each growler is also handsomely adored with a brand new snazzy tie! 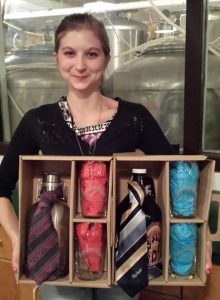 June 5: First Firkin Friday. Don’t miss the pomp and circumstance as a piper from The Regina Police Services Pipes & Drums band leads a small keg of specially created beer (the firkin) in a procession throughout the pub.  A volunteer is selected to tap the firkin and delicious suds tend to soak all those in near proximity. Tapping takes place at 5:30 PM and the pub is generally quite full by 4:00 PM. This month’s firkin offering will be a Chai Porter. June 8: Monday Night Jazz & Blues. Call Me Mildy. Original, alternative blues trio fronted by Greg Mildenberger. 8:00 PM. June 10: Wednesday Night Folk. Ron Loos.“ Insightful” lyrics and fine guitar plucking from this local veteran performer. 9:00 PM. June 15: Monday Night Jazz & Blues. Shane & Ethan Reoch. Regina’s friendliest bluesman is joined by his son for an evening of great blues tunes and storytelling. 8:00 PM. June 17: Wednesday Night Folk. Bradford. Talented folk duo featuring singers/guitarists Brad Papp and Mark Radford. 9:00 PM. PLEASE NOTE: The Bushwakker will be closed to the public for a private function for Saskatchewan Trade and Export Partnership between 5:00 PM and 9:00 PM. June 18: 2015 JazzFest Regina Bushwakker Performance - The Heavyweights Brass Band from Toronto. The biggest night of the year for live jazz at The Bushwakker! Brass band music is gaining street cred with six raucous musicians from Toronto. The Heavyweights Brass Band deftly mixes the diverse flavors of jazz, pop, funk, world beat and more into an irresistible, multicultural musical feast. This accomplished quintet injects every tune with an infectious sense of fun, excitement, and impeccable musicianship. An original, modern concept utilizing a classic instrumental line-up.  The band performs a mash-up of originals, classic New Orleans brass band repertoire and contemporary pop hits that share a consistent thread of quality, humour, virtuosity and fantastic collective improvisation. This is one of the coolest ideas for a band that we have heard in a long time. The band has a musical and personable appeal that transcends generations and genres. They have wowed crowds that ranged from university kids to retirees with their fresh and energetic approach to the genre. There's an equal attention to musicianship and entertainment that results in their winning formula. This is take-no-prisoners funky groove music at its best with plenty to keep the ears happy while the butt shakes! Rush seating tickets are $15 and available at the Bushwakker and Bach & Beyond. June 19: Riders vs Stampeders. Kick off 7:30 PM. The first home game of the season may be an exhibition game but many folks like to see the promise this year’s team has to offer. Be sure to stop by The Bushwakker before, during or after the game and enjoy our Stampeder Burger & a Pint feature for only $16.95. Think of it as "devouring" the competition. Good luck in 2015 Riders! June 22: Monday Night Jazz & Blues. ‘round Midnight. Popular act plays popular jazz featuring new lead singer, Carl Williams. 8:00 PM. June 24: Wednesday Night Folk. Katie Miller Trio. Saskatchewan singer songwriter delivers folk rock songs from her debut album, Silverflower, along with covers of her musical influences including Neil Young and The Tragically Hip. 9:00 PM. June 27: Riders vs Bombers. Kick off is at 6:00 PM. The first regular home game of the season promises to be a good one. Always nice to see our many Manitoba friends who often visit us for The Labour Day Classic in September. Help cheer on the Riders by devouring our Bomber Burger & A Pint feature before, during or after the game! Only $16.95. June 29: Monday Night Jazz & Blues. AZ Paris. Blues duo plays raw new original blues with a twist, and cover songs that are done with justice. 8:00 PM.

If you live outside of China, you may never had heard of Snow, a pale ale made by SABMiller and China Resources Enterprise. But it has been the top selling beer brand in the world in terms of volume since 2008, when it overtook Bud Light. SABMiller likes to brag that in 2012 it sold enough Snow beer to fill 12 Olympic-sized swimming pools every day for a year. Snow’s primary advantage is that it is sold in the world’s largest beer market. As Quartz has pointed out, China is the biggest beer market in the world by volume, and overtook the US in 2002. (It is now twice as large, but the US still leads in terms of sales value.) Moreover, it’s cheap, as little as 3 renminbi ($0.49) for a 330 ml can, widely distributed, and according to SABMiller, works well with spicy Chinese meals. As one reviewer explains: There are some beers you buy because they taste great and others you buy because they are cheap. Snow fills the latter category quite nicely in China. For 3.80 RMB, or roughly 50 cents, you can have a regular old Euro pale. It is what it is, and really for what it is, not terrible. Like the bottle says: “Relax, it’s fine.” Of the top ten beer brands around the world, four of them are Chinese (Snow, Tsingtao, Yanjing, and Harbin.) But watery, low alcohol-content beer may be losing favor with Chinese consumers. Last year, domestic beer production output fell by 1%, the first drop in ten consecutive years of growth. Meanwhile, beer imports from Germany, Belgium, the Netherlands, France, and other markets are growing, according to the US Department of Agriculture’s Foreign Agricultural Service. Craft beer stores and bars have also been popping up around cities like Beijing and Shanghai, giving US industry observers hope that a window of opportunity, similar to one that opened for imported wine a decade ago, has opened for beer as well. 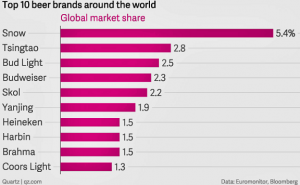 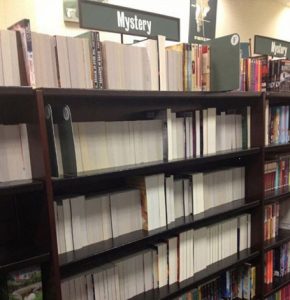 LORENA BOBBIT VIRUS..........Turns your hard disk into a 3.5 inch floppy. ELLEN DEGENERES VIRUS........Your IBM suddenly claims it's a MAC. DISNEY VIRUS.................Everything in the computer goes Goofy. MIKE TYSON VIRUS.............Quits after one byte. PROZAC VIRUS.......Screws up your RAM but your processor doesn't care. WOODY ALLEN VIRUS.........By-passes the motherboard and turns on daughter card. RONALD REAGAN VIRUS..........Saves your data, but forgets DR. KEVORKIAN VIRUS.....Searches your hard drive for old files and deletes them. FEDERAL BUREAUCRAT VIRUS - Divides your hard drive into hundreds of little units, each of which do practically nothing, but all of which claim to be the most important part of the computer. PAUL REVERE VIRUS- This revolutionary virus doesn't horse around. It warns you of impending disk attack, once if by LAN, twice if by C. AT&T VIRUS- Every three minutes it reminds you what great service you are getting. GOVERNMENT ECONOMIST VIRUS- Nothing works, but all your diagnostic software says everything is fine. AIRLINE VIRUS- You're in Chicago but your data is in Singapore.