Our premium red wine special for April is Arboleda Cabernet Sauvignon from Chile. The white is Charles Smith (2014 Winemaker of The Year) Kung Fu Girl Riesling from Washington State. Both are $8.95 for a glass and $25.95 for a half litre. Our guest draught tap is currently pouring the Centennial Single Hop Pale Ale from the Nokomis Brewery. Next up is a specialty offering from the Paddock Wood Brewery in Saskatoon.  The Cerces Elixir is a barrel-aged version of their Imperial IPA.

Apr. 16: Science Pub edition #28 – Let’s Talk Trash: The Use of Landfill Technology. Presented by The University of Regina Faculty of Science and The Bushwakker Brewpub. Our wildly popular monthly Science Pub Series continues in 2015! Enjoy lectures on scientific topics of general interest in our Arizona Room (main floor banquet room) over beer and snacks. The room opens at 5:00 PM and quite often is full by 6:00 PM. Avoid disappointment and come down early for dinner and a pint before the presentation which begins at 7:00 PM. This month's lecture will be presented by Dr. Kelvin T. W. Ng from the U of R Faculty of Engineering and Applied Science. In Canada, the municipal solid waste (MSW) generation rate has been  increasing since 1990. Currently we generate more MSW per-capita than most other countries. Landfill technology is the most commonly used MSW treatment method in Canada. Operation of landfills and other land disposal sites, however, contributes to many environmental problems, such as the generation of methane (a greenhouse gas) and leachate (a toxic and concentrated “garbage juice”) Apr. 20: Monday Night Jazz & Blues. Jeff Mertick & Mark Muehr. Acoustic guitar blues from two Saskatchewan talents. 8:00 PM. Apr. 22: Wednesday Night Folk. Sam Weber. 21-year-old guitar slinger, alt/folk songwriter from North Saanich, BC with a full-length debut album. 9:00 PM. Apr. 27: Monday Night Jazz & Blues. Whiteboy Slim’s Birthday Blues Bash. Toronto Exclusive Magazine-Best Blues Artist , Best. Blues CD, Best Blues Song 2007 & 2010. 8:00 PM. Apr. 29: Wednesday Night Folk. Bears in Hazenmore. Ambient-indie folk from the heart of the prairies. 9:00 PM.

By Meghan Storey In this episode of Edible Films (produced by Edible Brooklyn), Brooklyn Brewery Brewmaster Garrett Oliver shares his thoughts on craft beer as it relates to American food today. For Oliver, beer is food, and he considers himself to be the chef of the brewery. Here are three powerful quotes from the video that summarize Oliver’s view of the rise (or renaissance) of American craft beer and food. • “To me, beer is really a part of the story of American food. If you look at the way craft beer has risen over the last 20 years, it tracks exactly with olive oil, cheese, bread, ice cream—everything that’s made a comeback from an industrialized food system.” • “Beer is simply a part of the renaissance of American food.” • “Industrialized food and industrialized beer was weird. We had 400 years of brewing in the Americas and only 50-60 years was this weird little spot where we had flavorless beer that was made by machines. And now, we’re recovering.” 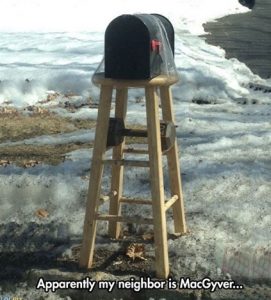 A first grade girl handed in the drawing below for her homework assignment. 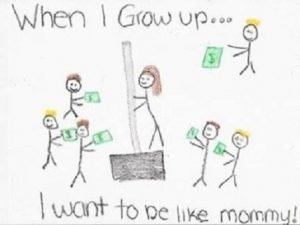 The teacher graded it and the child took it home. She returned to school the next day with the following note: Dear Ms. Davis, I want to be perfectly clear on my child's homework illustration. It is NOT of me on a dance pole on a stage in a strip joint surrounded by male customers with money. I work at Home Depot and had commented to my daughter how much money we made in the recent snowstorm. This drawing is of me selling a snow shovel. Sincerely, Mrs. Harrington A man was constipated, so he decided to go to the doctor. The doctor examined him and explained, "I'm going to give you some suppositories. I'll insert one now, and then I'll give you another one for later this evening." Later that evening, the man asks has his wife to insert the suppository. She agrees reluctantly, then puts one hand on his shoulder and inserts the suppository. Suddenly, her husband shrieks, "Aahhhhh!" "What's wrong? Did I hurt you?" she asks. "No... I just realized that the doctor had *both* his hands on my shoulders!" Doctor Joe had slept with one of his patients and had felt guilty all day long. No matter how much he tried to forget about it, he couldn't. The guilt and sense of betrayal was overwhelming. But every once in a while he'd hear that soothing voice, within himself, trying to reassure him. "Joe, don't worry about it. You aren't the first doctor to sleep with one of their patients and you won't be the last. And you're single. Let it go." But invariably the other voice would bring him back to reality: "Joe, you're a vet."