Our premium red wine special for April is Arboleda Cabernet Sauvignon from Chili. The white is Charles Smith (2014 Winemaker of The Year) Kung Fu Girl Riesling from Washington State. Both are $8.95 for a glass and $25.95 for a half litre. Our guest draught tap is currently pouring Black Bridge Extra Red Ale from Swift Current for $7.95 a pint. Please note that the Bushwakker will open at noon on Good Friday, April 3.

Apr. 3: First Firkin Good Friday. It may be Good Friday but we will indeed be open! Don’t miss the pomp and circumstance as a small keg of specially created beer is lead throughout the pub by a piper from the Regina Police Pipes & Drums. A volunteer is selected to tap the firkin and quite often all those in the immediate proximity receive a beer shower. The suspense and drama and the deliciousness of First Firkin Friday starts at 5:30 PM. Apr. 6: Monday Night Jazz & Blues. ‘round Midnight plays great jazz and adult contemporary tunes with new lead singer, Carl Williams. 8:00 PM. Apr. 8: Wednesday Night Folk. Bradford plays great acoustic folk and features Brad Papp and Mark Radford. Come celebrate Brad’s 50th birthday! 9:00 PM. April 11: Annual Bushwakker Brewer’s Dinner 7:00 PM (Sold Out)  Apr. 13: Monday Night Jazz & Blues. Shane & Ethan Reoch. Regina’s friendliest bluesman is joined by his son. 8:00 PM. Apr. 15: Wednesday Night Folk. Ryan Hicks. Ryan Hicks brings the sunshine to you with a fun blend of covers and songs off his debut album, Prairie Ocean. 9:00 PM. Apr. 16: Science Pub edition #28 – Let’s Talk Trash: The Use of Landfill Technology. Presented by The University of Regina Faculty of Science and The Bushwakker Brewpub. Our wildly popular monthly Science Pub Series continues in 2015! Enjoy lectures on scientific topics of general interest in our Arizona Room (main floor banquet room) over beer and snacks. The room opens at 5:00 PM and quite often is full by 6:00 PM. Avoid disappointment and come down early for dinner and a pint before the presentation which begins at 7:00 PM. This month's lecture will be presented by Dr. Kelvin T. W. Ng from the U of R Faculty of Engineering and Applied Science. In Canada, the municipal solid waste (MSW) generation rate has been steadily increasing since 1990. Currently we generate more MSW per-capita than most other countries. Landfill technology is the most commonly used MSW treatment method in Canada. Operation of landfills and other land disposal sites, however, contributes to many environmental problems, such as the generation of methane (a greenhouse gas) and leachate (a toxic and concentrated “garbage juice”). According to the waste data, residents in Saskatchewan recycle a very small fraction of their wastes, and send majorit y of them to our landfills. In this talk, we will talk about the solid waste management system in Saskatchewan, and the benefits and challenges associated with the use of landfill technology. Apr. 20: Monday Night Jazz & Blues. Jeff Mertick & Mark Muehr. Acoustic guitar blues from two Saskatchewan talents. 8:00 PM. Apr. 22: Wednesday Night Folk. Sam Weber. 21-year-old guitar slinger, alt/folk songwriter from North Saanich, BC with a full-length debut album. 9:00 PM. Apr. 27: Monday Night Jazz & Blues. Whiteboy Slim’s Birthday Blues Bash. Toronto Exclusive Magazine-Best Blues Artist , Best. Blues CD, Best Blues Song 2007 & 2010. 8:00 PM. Apr. 29: Wednesday Night Folk. Bears in Hazenmore. Ambient-indie folk from the heart of the prairies. 9:00 PM. 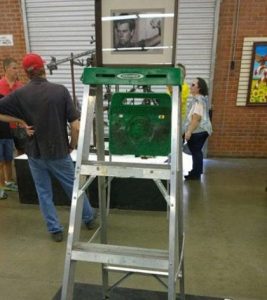 This was entered into an art competition, titled “Stairway to Kevin"

April Artist of the Month

Cristian Barreno; Visual Artist Cristian is an Indigenous Mayan from Quetzaltenango, Guatemala. From an early age he was exposed to art thanks to both of his parents. His mother Fidelia worked with colorful embroidery on clothing worn by indigenous women. The designs and colors on blouses and skirts described nature, culture and a little about the family history of those who wore the clothing.  Cristian’s father, Augusto, is a recognized stone carver from Quetzaltenango. Don Augusto worked many years on pieces of stone that became part of buildings and home decorations.  Cristian’s siblings were also talented at drawing, painting and craft making. However, for him painting meant more than just a hobby. Cristian started his first painting projects as a teenager and he painted much of the natural scenery and people from Guatemala. His first works were created using oil paint on canvases. There are many painters in Guatemala, so those who embrace this occupation have to be really good at it if they want to stand out, and be recognized. In other words, criticism was always tough but exciting! Thanks to his brother, Cristian moved to Regina SK in 2002 to pursue a Bachelor in Business Administration. Although he enjoyed his studies, he continued exploring new themes and other painting techniques. He befriended talented artists in the city who inspired him and motivated him to go the extra mile each day. The Queen City is now Cristian’s home and he is happy in sharing beautiful memories with the love of his life Adriana who is from Veracruz Mexico.  Much of Cristian’s art today draws on the fascinating multiculturalism he is exposed to and highlights it with the bold, vibrant colors found in traditional Guatemalan artwork. Ed. Note: Christian has been our Artist of the Month at the Bushwakker several times.

Revenge of the Tartan Tsar’

The 2015 Brewer’s Dinner is now sold out. Those with tickets are looking forward to participating in our premier dining event. They may notice that the beer that will accompany the last course is called “Revenge of the Tartan Tsar”; Russian Imperial 25th Anniversary Ale. That’s quite a mouthful. Next January will see the 25th anniversary of the Bushwakker. We are planning to make quite a big deal out it! “Revenge” will be officially launched at that time. It’s a big beer and the kind of beer that can be improved with aging. Small beers tend to develop off-flavours that can be quite unpleasant if left sitting too long. In 2011 our Tartan Tsar won Gold in its class and was a close competitor for “Gold, Best in Show”, at the Canadian Brewing Awards. The guest celebrity judge, William Shatner, promoted it as the winner, but it lost the top position to another beer. Brewer Mitch has now “tuned up” his original formulation, hence the new name, and we intend to give it another opportunity for gold. So those who have those prized Brewer’s Dinner tickets will get a chance to preview Revenge of the Tartan Tsar on April 11. 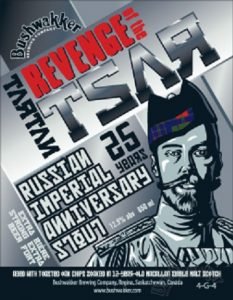