Our premium wine specials for February are from BC’s Wayne Gretzky Okanagan Wines. The red is The Great Red VQA (merlot, malbec, cabernet, cabernet franc, syrah, petit verdot, mouvedre, gamay noir). The white is The Great White VQA (sauvignon blanc, riesling, pinot grigio, chardonnay, semillon), $8.95 for a glass and $24.95 for a half litre. Our guest import tap now pours the Mikkeller Monk’s Elixir Quadruple from Belgium for $9.95 a pint.  Next up is the De Molen Vuur & Vlum (Fire & Flames) IPA from the Netherlands. 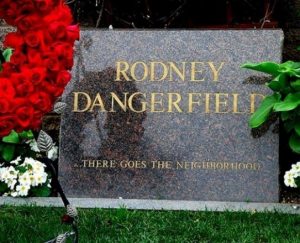 Matt Laslo When Budweiser ran a snarky ad about craft beer on Super Bowl Sunday they had no idea they had picked a fight in very high places. Washington, DC – Budweiser may have to host the next Beer Summit in Washington, because they’ve accidentally pissed off lawmakers in both parties. While Budweiser thought it was just sticking a finger in the eye of, shall we say, experimental beer fans nationwide with its Super Bowl commercial mocking local craft brewing artisans and aficionados alike, they seem to have forgotten that the craft beer industry has a lot of allies in Congress. The ad – “Brewed the Hard Way” – disses crafty concoctions, even calling out Pumpkin Peach Ale by name, and declares pride in macro brewing for people who don’t want to “fuss over” silly little details, like the actual taste of their beer. But to politicians who are falling over themselves to attract the creative energy, votes and small dollar donations sitting largely untapped at their local breweries - the ad was personal. "I think it's insane,” said Rep. Patrick McHenry (R-N.C.), a co-chair of the House Small Brewers Caucus. “I don't think it's the right approach." Beer seems to be taking a note from politics (God, help us all). After Budweiser dropped its multi-million dollar attack ad, craft beer lovers started throwing their own sudsy blows at Big Beer. Lots of them. But politicians seem to be rallying around the little guy, who they say was provoked by Budweiser. “It’s like the first political attack ad on this thing, so like the politics of beer,” said McHenry, the craft loving congressman who represents a whopping 25 small breweries in his Asheville, N.C. district. Rep. Peter DeFazio (D-Ore.) missed the feisty Budweiser ad because he watched the Super Bowl in a “chaotic environment,” but that didn’t mean he wasn’t willing to tear it down. “They know that the craft beer industry is eating their lunch,” the animated founder of the Small Brewers Caucus yelled. “More and more Americans are developing a taste for beer that isn’t insipid and has real taste, and so they’re now starting to buy them up.” DeFazio’s anger is partly due to recently watching 10 Barrel Brewing Co. of the last Congress the BREW Act was signed onto by 181 House members. Bend, Ore. become another local operation added to the binder full of craft breweries acquired by Anheuser-Busch InBev – a Belgium-based company that looks to be picking off the most successful American craft breweries one by one. The conglomerate boasts being the largest brewer in the world and claims to now control 25% of global beer sales. They couldn’t have reached a quarter of international beer sales without scooping up craft breweries in the U.S. though, which DeFazio said starkly contrasts with their Super Bowl message. “So it kind of contradicts their ad. I mean, they’re trying to say, ‘Oh, come on back and buy the schlock,’ yet on the other hand, they’re out buying up the good beer,” DeFazio said, before he added a warning. “They better not change the formula’s cause people will just stop buying it and someone else will replace them.” Less than 72 hours after the Budweiser ad unleashed the anger of craft beer fans, Sens. Ben Cardin (D-Md.) and Susan Collins (R-Maine) reintroduced their legislation aimed at propping up the craft beer industry: The Small BREW Act, which stands for The Small Brewer Reinvestment and Expanding Workforce Act. The legislation seeks to foster small breweries, i.e. local jobs and votes, through dropping the tax rate per barrel from $7.00 to $3.50 for the first 60,000 barrels a brewery churns out. It would then save small breweries an additional $2.00 on every barrel until they hit the magical 2 million number. The big boys and girls aren’t invited to the dance though; any macro brewery churning out more than 6 million barrels is excluded from the new rates. Sen. Cardin said it’s a simple idea. “I don’t think we ever intended for small businesses to be burdened with an excise tax, such as the beer tax,” Cardin said. “When we’re talking about a craft brew industry that is generally supporting small business and encouraging a new generation of people who really appreciate the art of brewing beer.” A quarter of the Senate have signed onto the BREW Act, but Big Beer isn’t sitting this fight out. Within 24 hours of the introduction of the BREW Act, a pair of U.S. House members dropped The Fair BEER - Brewers Excise and Economic Relief – Act. It removes taxes for the first 7,143 barrels and then basically extends the Small BREW Act to Big Beer. “This comprehensive reform bill supports brewpubs, microbrewers, national craft brewers, major brewers, and importers alike and encourages their entrepreneurial spirit, which is exactly the spirit we need to get America’s economic engine going again,”  Rep. Steve Womack (R-Ark.), an original sponsor of the BEER Act, said in a statement. Thorne said it’s not about the breweries themselves - it’s really about blue collar vs. white collar drinkers.
“You’re really talking about people who pave roads, lay dry wall, wire houses, deliver washing machines, do landscaping; they’re the ones paying for the light beer and the Mexican imports and they’re the ones paying the top of the dollar,” Thorne said before brushing aside craft beer fans as wealthy elitists. “And some chucklehead who’s making $150,000 a year could put down $50 or $45 bucks for a case of beer he’s a paying a much smaller tax.” 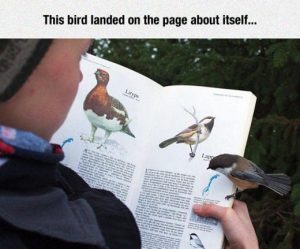 Coach Bobby Ross had put together the perfect Lions team. The only thing he was missing was a good quarterback. He had scouted all the colleges, and even the high schools, but he couldn't find a ringer quarterback who could ensure a Super Bowl win. Then one night, while watching CNN, he saw a war-zone scene in the Ukraine. In one corner of the background, he spotted a young Ukrainian soldier with a truly incredible arm. He threw a hand grenade straight into a 15th-story window 200 yards away... Ka-boom! He throws another hand grenade into a group of 10 soldiers 100 yards away... Ka-blooey! Then a car passed, going 90 mph... BAM! Bulls-eye! "I've got to get me this guy!" Ross says to himself. "He's got the perfect arm!" So, without much cajoling he manages to bring the kid to the States, away from the dangers of the Ukraine and teaches him the great game of football. That season the Lions go on to win the Super Bowl for the first time in history and the young, modest Ukrainian becomes one of the Great Heroes of football. When Ross asks him what he wants, all the young man wants to do is to call his mother. "Mom," he says into the phone, "I just won the Super Bowl." "I spit on your superbowl, I don't want to talk to you," the old woman says. "You deserted us. You are not my son." "...But Mamma!" the young man pleads. "I just won the greatest sporting event in the world. Thousands of people are calling my name, our family name..." "No, let me tell you," the mother screams. "At this very moment, there are gunshots all around us. The neighborhood is a pile of rubble. Your two brothers were beaten within an inch of their lives last week, and this week your sister was raped in broad daylight." The old lady pauses, and then tearfully says "...I'll never forgive you for making us move to Detroit." 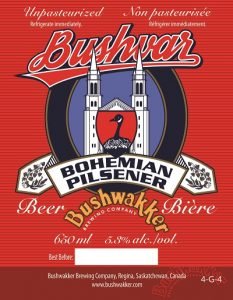 Our newest label, by Gavin de Lint. It has elements of both the American and Czechoslovakian original labels, Regina’s Holy Rosary Cathedral, and the original Joe Fafard Bushwakker label.