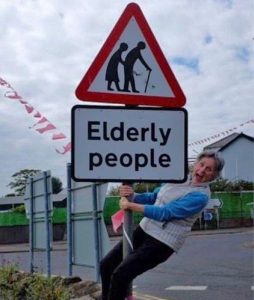 An appropriate response to ageism.

Craft Beer Uses 4 Times As Much Barley As Corporate Brew

Tom Philpott Jan 20, 2015 For decades, US beer lovers have denounced corporate-made brew as watered-down swill. Just how diluted is the product peddled by the two enormous dinosaurs that dodder over the US beer market, InBev (maker of Bud) and MillerCoors? In a delicious new report, the US Department of Agriculture has numbers. Most beers, industrial or craft, get their substance—what experts call body, or mouth feel, as well as any sweet and toasty flavors—from malted barley. (Malting is the process of germinating barley grains, which frees up their sugars for fermentation.) The USDA researchers crunched data on the US barley and beer markets, and found that craft brewers on average use four times more barley per barrel of beer than the giants do. Which makes craft beer seem like a bit of a bargain. A six-pack of Miller Light retails for about $5.50 in Texas, while typical craft beers go for about $10 per six—not even twice the price for four times the barley (and flavor). (Craft beers also tend to contain much more of the other main ingredient in beer, hops). In essence, Big Beer (like Big Almond) has hit upon a profitable strategy for reselling tap water at a high markup. Now, one way to look at it is: Isn't watery beer easier on the environment? You know: Less barley embedded in each beer means less fertilizer for barley production, less pesticides, etc. That's really a version of an old industry saw—the solution to pollution is dilution. But there's no evidence that people consume fewer resources per beer-drinking session when they consume corporate beer than they do when they drink craft. Let's say Person A knocks back four easy-drinking Miller Lites and Person B is satisfied after two malty, substantial Dale's Pale Ales. The beer snob may have consumed more overall barley, but she has two fewer empties to show for her pleasure. In addition to less energy embedded in fabricating and recycling fewer cans or bottles, that also means less space in trucks, coolers, etc. An environmental case for watered-down beer exists, I guess, but it's as weak and uninteresting as the resulting beer itself. At any rate, the report confirms a trend I've been writing about for a while (and enjoying even longer): Craft beer is undergoing a boom, even as corporate beer weathers a long, slow decline. Between 1993 and 2013, the researchers find, the amount of beer churned out by craft brewers expanded by a factor of nine, growing by an average rate of nearly 14 percent annually. Corporate swill? Output has dropped by an average of 0.6 percent annually over that period. Craft still accounts for only about 7.8 percent of beer produced the in the US—meaning there's plenty of room for additional growth. The researchers conclude that the craft beer renaissance could boost domestic barley production—total US barley acres peaked at about 11 million in 1990 and have since fallen well below 5 million acres. (For comparison, US farmers typically plant about 90 million acres of corn and 80 million acres of soybeans.) About a quarter of US barley is used as animal feed; the great bulk of the rest gets malted for beer. (Malted barley is also used for Scotch-style whiskey, which is made here only in small amounts—our native brown spirit, bourbon, is based mainly on corn.) Overall US malt demand has fallen since the early 1990s as Big Beer has shifted to lighter styles and seen demand for its products drop. But the craft renaissance has begun to offset and could eventually reverse the trend of falling malt demand, the USDA researchers conclude. Currently, the malted barley industry is global in scope and dominated by a handful of companies, including Cargill. But alongside the craft-brew explosion, small, locally oriented malt houses are springing up nationwide, providing a link between brewers and nearby farmers. And that could be a good thing for the environment. If US farmers incorporated a "small grain" like barley into the dominant corn-soy rotation, it would break insect, disease, and weed cycles, drastically reducing reliance on toxic pesticides, a 2012 Iowa State study found. I'd drink to that.

Why You Should Never, Ever, Question A Drunk... I was shopping at the local supermarket where I selected: A half-gallon of 2% milk A carton of eggs A quart of orange juice A head of lettuce A 2 lb. can of coffee A 1 lb. package of bacon As I was unloading my items on the conveyor belt to check out, a drunk standing behind me watched as I placed the items in front of the cashier. While the cashier was ringing up the purchases, the drunk calmly stated, 'You must be single.' I was a bit startled by this proclamation, but I was intrigued by the derelict's intuition, since I indeed had never found Mr. Right. I looked at the six items on the belt and saw nothing particularly unusual about my selections that could have tipped off the drunk to my marital status. Curiosity getting the better of me, I said , 'Yes you are correct. But how on earth did you know that?' The drunk replied, 'Cause you're ugly. The bartender asks the guy sitting at the bar, "What'll you have?" The guy answers, "A scotch, please." The bartender hands him the drink, and says, "That'll be five dollars," to which the guy replies, "What are you talking about? I don't owe you anything for this." A lawyer, sitting nearby and overhearing the conversation, then says to the bartender, "You know, he's got you there. In the original offer, which constitutes a binding contract upon acceptance, there was no stipulation of remuneration." The bartender was not impressed, but says to the guy, "Okay, you beat me for a drink. But don't ever let me catch you in here again." The next day, same guy walks into the bar. Bartender says, "What the heck are you doing in here? I can't believe you've got the audacity to come back!" The guy says, "What are you talking about? I've never been in this place in my life!" The bartender replies, "I'm very sorry, but this is uncanny. You must have a double." To which the guy replies, "Thank you. Make it a scotch." I met an older woman at a bar last night. She wasn't bad for 57, we drank and bullsh*tted a bit, then she asked if I 'd ever had a mother and daughter threesome? I said no. We drank a bit more, then she says that tonight was my lucky night. I went back to her place. She put the hall light on and shouted upstairs: "Mom you still awake?