Our premium white wine special for January is La Báscula Heights of The Charge (Verejo/Viura) from Spain. The red is Duck Commander Triple Threat Red (Zin/Merlot/Cab) from California. Both are $8.50 for a glass and $24.95 for a half litre. Our guest tap now offers Dieu Du Ciel Disco Soleil Kumquat IPA from Montreal for $8.95 a pint.  Next up will be the Brewdog/Mikkeller I Hardcore You Imperial IPA from Scotland for $9.95 a pint.

A self-serve beer station will be coming to an airport near you!

Saturday, January 17, 2015 CHICAGO (WABC) -- You will soon be able to help yourself to the perfect pour of your favorite brew, but you're going to have to travel to get it. The first self-serve beer station will be installed at O'Hare International Airport in Chicago. The "pour my beer" station will allow people to help themselves to the taps. The Chicago-based company is expected to install similar stations this year at bars in Italy and Brazil. 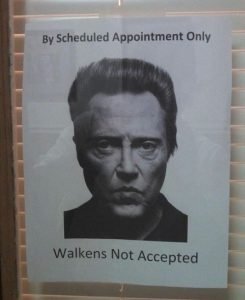 By Kimberley Lovato Dec 23, 2014 Sharing a bottle of wine at dinner, or even lunch if you’re into the European way of doing things, is pretty much the modus operandi when many friends go out. But lately I’ve noticed that more and more people are sharing beer, too, thanks to the appearance of large format craft brews on menus around San Francisco, encouraging the same sense of community and conviviality around the table that wine has done for centuries. Nick Henry, beverage manager at Epic Roasthouse (www.epicroasthouse.com), launched his large format beer program just two months ago, the catalyst being a trip to Europe he took more than a decade ago. “Back in 2000, I spent the winter in Italy and noticed that Italians would serve beer in large liter bottles for the table to share,” Henry recalled. “I quickly realized that this was done as a gesture of community and since Epic has large groups of people for happy hour as well as lunch and dinner, this ‘family style’ format seemed like a perfect fit.” Among the myriad large format bottles Henry has on the menu are California’s Anderson Valley’s Poleeko Pale Ale, Anchor Brewing’s Brekle’s Brown and Stone Brewery’s Arrogant Bastard Ale, each 22 ounces for $12. They are served upstairs in the Quiver Bar as well as in the main dining room and on the patio overlooking the Bay Bridge. For those who enjoy the ritual of having a bottle of wine opened and poured, fear not. At Epic, beers are poured tableside in proper ale glasses. Beer has long foamed in the shadow of wine, which is often perceived as the more sophisticated choice. But over the last 10 years, artisan craft beers have held their own, swelling in popularity with tipplers, and now accounting for more than 14 percent of beer sales in the United States, according to the Brewers Association. Large format bottles range in size and shape, from standard metal caps to cork- and cage-style bottles á la Champagne. A typical single-serving of beer is 12 fluid ounces, or roughly 350 milliliters, while larger format brews can go from 22 fluid ounces, or roughly 750 milliliters, up to hangover-inducing 1.5-liter bottles. And for those who say, “I don’t like beer,” I say, forget what you remember from the tailgaters and keg parties in college. Craft brews are high quality, with flavors as limitless as the ingredients used to create them, from hoppy and fruity, to sweet or sour, bold or tangy — the variety is staggering and will have you rethinking beer. Over at Fat Angel (www.fatangelsf.com) they’ve been pouring large format beers since opening in 2011 in hopes of curating the best possible list of good and hard-to-find beers for customers. “The decision to offer larger format craft beers had everything to do with getting excellent, hard-to-find craft beer on our guests' tables,” said Jason Kirmse, a partner in Hi Neighbor restaurant group, which manages Fat Angel. A good beer is not just as tasty as a fine Bordeaux but it also can be equally, if not more, economical than wine. A browse through Fat Angel’s beer tome and you’ll find a heavy emphasis on European and West Coast beers including many from California and Oregon, with a smattering of offerings from other parts of the U.S. at affordable prices. A 750 milliliter bottle of Gift of the Magi from The Lost Abbey (www.lostabbey.com) in San Marcos is $23; The Tripel Tonnellerie from The Bruery (www.thebruery.com) in Placentia (750 milliliters) is $28 and New Almaden Red from Santa Clara Valley Brewing (www.scvbrewing.com) in San Jose (650 milliliters) is just $16. “We totally encourage people to share beers this size,” Kirmse said. “Not only does it give you an opportunity to pair different beers during your dinner, but sharing also goes a long way in keeping palate fatigue in check.” Lest your palate fall asleep unsatisfied, call a few friends, grab a beer tonight, and go big. Cheers!

A man placed some flowers on the grave of his dearly departed mother and started back toward his car when his attention was diverted to another man kneeling at a grave. The man seemed to be praying with profound intensity and kept repeating, "Why did you have to die? Why did you have to die?" The first man approached him and said, "Sir, I don't wish to intrude on your private grief, but this demonstration of pain is more than I've ever seen before. For whom do you mourn so deeply? A child? A parent?" The mourner took a moment to collect himself, then replied, "My wife's first husband." A woman stopped by unannounced at her recently married son's house. She rang the doorbell and walked in. She was shocked to see her daughter-in-law lying on the couch, totally naked. Soft music was playing and the aroma of perfume filled the room. "What are you doing?" she asked. "I'm waiting for my husband to come home from work," the daughter-in-law said. "I am wearing my love dress." "Love dress? But you're naked!" said the mother-in-law. "My husband loves me to wear this dress," she explained. "It excites him to no end. Every time he sees me in this dress, he instantly becomes romantic and ravages me for hours on end. He can't get enough of me." The mother-in-law left. When she got home, she undressed, showered, put on her best perfume, dimmed the lights, put on a romantic CD, and lay on the couch waiting for her husband to arrive. Finally, her husband came home. He walked in and saw her lying there so provocatively. What are you doing?" he asked. This is my love dress" she whispered, sensually. "Needs ironing," he said. 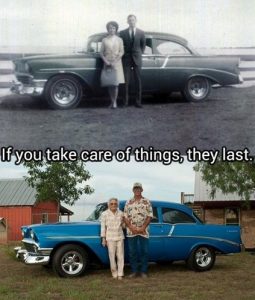