Our premium wine specials for December are from Ontario’s Pelee Island Winery. The red is a Semi-Sweet Merlot. The white is a Pinot Grigio VQA. Both are $7.50 for a glass and $21.95 for a half litre.

Dec. 13: Annual Missiletow Christmas Ale Release at 11:00 AM Sharp! Avid fans of our “other” Christmas specialty brew look forward to this day every year. Only one tank of our winter warmer is produced each year. Rich malt flavours with plenty of depth and complexity. The perfect ale to sip on whilst curled up with a good book in front of a fireplace on a cold Saskatchewan winter night. We hope this special ale will last on tap until Christmas but the limited number of bottles will most likely be sold out in the blink of an eye. See you at 11:00! Dec. 15: Monday Night Jazz & Blues. A Ben Winoski White Christmas. Some seasonal favourites with some elements of jazz and blues from this talented acoustic act. 8:00 PM. Dec. 17: Wednesday Night Folk. The Regina Male Voice Choir. The annual one hour Christmas concert from Canada’s longest continually operating male voice choir returns! Don’t miss the procession of the massive boar’s head during the Boar’s Head Carol. Singing contests and prizes! This special concert starts at 8:00 PM. Dec. 22: Monday Night Jazz & Blues. The Ministry of Groove. Enjoy great 1970’s jazz funk and more. 8:00 PM. Dec. 24: Christmas Eve. Closed at 5:00 PM. Dec. 25. Closed. Merry Christmas! Dec. 29: Monday Night Jazz & Blues. 8’s Enuff. Great big band jazz from this mini big band. 8:00 PM. Dec. 31: Nothing For New Year’s #9. No noise makers, no band, no escalated drink prices, no cover charge, no midnight champagne, no dancing, no line-ups, no hassle, no problem. Come spend a relaxing evening at the good 'ol Bushwakker as we welcome 2015. Perhaps try Chef Mike's special prime rib and jumbo Yorkshire pudding New Year's Eve dinner. Our most popular non-event of the year!

Jordan Chittley, CTVNews.ca While Canadians are drinking less beer overall, the market for craft beers is rapidly growing. Statistics Canada reports that over the past decade beer consumption has declined in favour of wine. But the really big change is that craft beers, or microbrews, now account for six per cent of the market. Some analysts suggest the number could triple in the coming years. A big change from three decades ago when the market was practically non-existent. "Since we opened in October, it has been incredibly busy," Conrad Gmoser, head brewer and co-owner of the B.C.-based Brassneck Brewery told CTV News. "It has been really great." Craft beer is made in smaller batches and comes in a variety of flavours from citrus to coffee. The Brewers Association of Canada defines a microbrewer as one that produces no more than 250,000 hectolitres of beer annually. The Liquor Distribution Branch in British Columbia said craft beer sales have increased 38 per cent over the past year. In Ontario, market share has tripled since 2002 and it continues to grow at around 10 per cent per year. This happens as sales by the large domestic brewers stay rather flat. Shae de Jaray, co-founder of Deep Cove Brewers and Distillers says the growth is because "People are looking for something else than just a basic lager or pale ale and are really trying to find out what their flavour is." He added, "Not only is it becoming big, it is becoming a staple." Currently B.C. has about 80 microbreweries, but that number is expected to grow to more than 100 by next year. Ontario has 110. 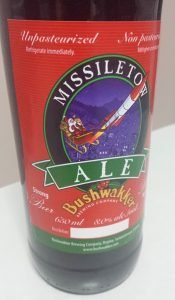 Jay R. Brooks  12/01/2014 With Christmas and Hanukkah just weeks away, you may need some gift ideas for the craft beer lover in your life. Luckily, I'm here to help. It may be the writer in me, but I consider a book one of the best gifts -- especially if it's a book that you can enjoy with a beer. As craft beer sales surge, there has been a surge of interest in books about beer, too. Check out the second edition of the "Pocket Beer Guide" (Firefly, $19.95, 320 pages) by Stephen Beaumont and Tim Webb. Released late this year, the 2015 edition is bigger than before and includes thumbnail reviews of 3,500 beers from around the world, including some California brewery reviews that I contributed. Toronto author Mirella Amato's recent "Beerology: Everything You Need to Know to Enjoy Beer ... Even More" (Random House, $24.95, 192 pages) provides a thorough overview for the budding beer connoisseur. For history buffs, I highly recommend "The Craft Beer Revolution: How a Band of Microbrewers Is Transforming the World's Favorite Drink" (Palgrave MacMillan, $25, 272 pages). It was written by journalist Steve Hindy, who gave up his post as Associated Press' Middle East correspondent in Beirut to co-found the Brooklyn Brewery. As a result, it's a well-written, well-researched history from someone who was actually there at the beginning of the microbrewery revolution. For more technical tastes, there's "American Sour Beers" (Brewers Publications, $19.95, 400 pages), by Michael Tonsmeire, which offers practical advice on how these challenging beers are made. The forward was written by Russian River Brewing's Vinnie Cilurzo. Or try Patrick Dawson's "Vintage Beer" (Storey Publishing, $14.95, 160 pages), a guide to beers that age well and how to store them until they're at their peak. And anyone who has read "Goodnight Moon" to their children thousands of times will appreciate "Goodnight Brew: A Parody for Beer People" (Bailiwick Press, $16.95, 32 pages) written by Ann E. Briated (well, really by Karla Oceanak, with illustrations by Allie Ogg). It may be just the thing for your own bedtime story this Christmas. 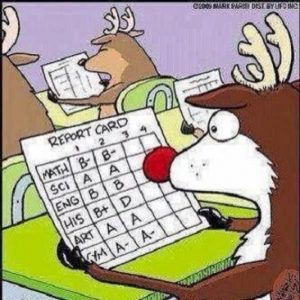 Don’t get it? Sing the song or read the lyrics. (Thanks to Marty Happy and George Takei.)

A mother and her very young son were flying Southwest Airlines from Kansas City to Chicago. The little boy (who had been looking out the window) turned to his mother and asked, "If big dogs have baby dogs, and big cats have baby cats, why don't big airplanes have baby airplanes?" The mother (who couldn't think of an answer) told her son to ask the stewardess. So the boy went down the aisle and asked the stewardess. The stewardess, who was very busy at the time, smiled and said, "Did your Mom tell you to ask me?" The boy said, "yes she did." "Well, then, you go and tell your mother that there are no baby airplanes because Southwest always pulls out on time. Have your Mom explain that to you." One of the airlines recently introduced a special half-fare rate for wives accompanying their husbands on business trips. Anticipating some valuable testimonials, the publicity department of the airline sent out letters to all the wives of businessmen who used the special rates, asking how they enjoyed their trip. Responses are still pouring in asking, "What trip?" While taxiing at London's Gatwick Airport, the crew of a U.S. Air flight departing for Ft. Lauderdale made a wrong turn and came nose to nose with a United 727. An irate female ground controller lashed out at the U.S. Air crew, screaming: "U.S. Air 2771, where the hell are you going? I told you to turn right onto Charlie taxiway! You turned right on Delta! Stop right there. I know it's difficult for you to tell the difference between C and D, but get it right!" Continuing her rage to the embarrassed crew, she was now shouting hysterically: "God! Now you've screwed everything up! It'll take forever to sort this out! You stay right there and don't move till I tell you to! You can expect progressive taxi instructions in about half an hour and I want you to go exactly where I tell you, when I tell you, and how I tell you! You got that, U.S. Air 2771?" "Yes, ma'am," the humbled crew responded. Naturally, the ground control communications frequency fell terribly silent after the verbal bashing of U.S. Air 2771. Nobody wanted to chance engaging the irate ground controller in her current state of mind. Tension in every cockpit around Gatwick was definitely running high. Just then an unknown pilot broke the silence and keyed his microphone, asking: "Wasn't I married to you once?" A man boarded an airplane in New Orleans with a box of frozen crab. A female crew member took the box and promised to put it in the crew's refrigerator, which she did. The man firmly advised her that he was holding her personally responsible for the crabs staying frozen, and proceeded to rant at her about what would happen if she let them thaw out. She was annoyed by his behavior. Shortly before landing in New York , she announced over the intercom to the entire cabin, 'Would the gentleman who gave me the crabs in New Orleans , please raise your hand?' Not one hand went up..so she took them home and ate them herself. Men never learn! 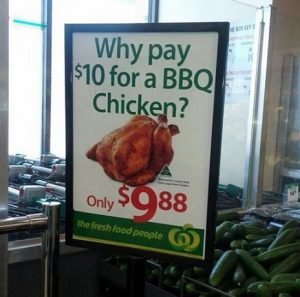 The foregoing may give you an idea for Christmas shopping, but if it does, you will probably need to shop on-line and to do it quickly. However, the Bushwakker offers a wide range of items that would make great gifts. We have boxes containing growlers and glasses designed specifically for Christmas as shown below.

Bushwakker Growler Gift Boxes now available for the Bushwakker enthusiast on your list. Choose from either a glass or stainless steel refillable beer growler with two etched Bushwakker pint glasses and a gift certificate for a free growler fill of any regular Bushwakker beer. Glass growler gift boxes are $35 and stainless steel growler gift boxes are $60. If you prefer a more decorative growler design we have a good supply of our “romantic” glass growlers (see below) with metal handles; $50 for the Growler itself. The Bushwakker website under the heading “Wakker Wear” lists a variety of Bushwakker clothing items, unique glassware and even CDs inspired by the Bushwakker.  Favourites include the Bushwakker pompom toque ($23) and the Chico IPA T-shirt ($30). 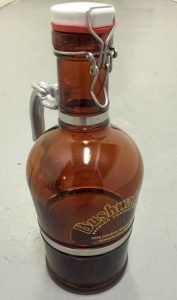 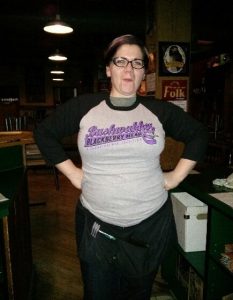