Our premium wine features for December are from Ontario’s Pelee Island Winery. The red is a Semi-Sweet Merlot. The white is a Pinot Grigio VQA. Both are $7.50 for a glass and $21.95 for a half litre. Our guest import tap now offers Black Bridge Belgian Blonde Ale from Swift Current for $7.50 a pint. Our Christmas lights are now hanging around the interior perimeter of the pub just in time for our annual Blackberry Mead Release this Saturday. Bushwakker server and bartender, Lexy Desjarlais, assisted Bar and Promotions Manager, Grant Frew, in hanging approximately 500 lights.

Dec. 5: First Firkin Friday. It is hard to imagine a more dramatic firkin tapping than the one we witnessed in early November. Have a look at the First Firkin video footage at website homepage  www.bushwakker.com to relive the drama! Men in kilts, members of The Fraser Pipe Band, flying keg faucets, beer soaked patrons, delicious suds and a whole lot of fun! The long-standing Bushwakker tradition continues at 5:30 PM. Plan to arrive early to secure a seat! Dec. 6: 2014 Bushwakker Blackberry Mead Release at 11:00 AM Sharp!  A true Saskatchewan phenomenon! Last year our entire Blackberry Mead offsale inventory of over 6000 bottles sold out in an hour and 45 minutes. The legion of devoted mead enthusiasts braved the minus-50-degree wind chill and began forming a line 12 hours before it went on sale. The line grew to more than an entire city block by 9:00 AM. It was just like a tailgate party! Experienced mead lovers came prepared with ice fishing huts and propane heaters. Porta potties will once again be in place and Bushwakker head brewer, Mitch Dalrymple, will be serving hot chocolate to all those waiting in line. Our mead-line enforcement crew will also ensure there is no butting in line and will be passing out mead purchase vouchers. We have been brewing our Blackberry Mead all year long preparing for our annual kick-off to the holiday season. 400 pounds of Lumsden Valley honey and 84 pounds of blackberries are used to create every batch. View the days remaining to Bushwakker Mead Day on our countdown clock over our brew house door. Commemorative vintage baseball-style Blackberry Mead t-shirts designed by local artist, Gavin de Lint, will also be available. Catch the buzz! Dec. 8: Monday Night Jazz & Blues. ‘round Midnight. Popular jazz act plays popular jazz tunes…and for the final time…with popular lead singer, Bev Zizzy. Last chance to her this powerful vocalist with this group folks. Don’t miss it! 8:00 PM. Dec. 10: Wednesday Night Folk: The Dickens Yuletide Singers. Talented vocal group perform in Victorian dress. Sure to get you into the spirit of the season! The one hour performance starts at 8:00 PM. Dec. 13: Annual Missiletow Christmas Ale Release at 11:00 AM Sharp! Avid fans of our “other” Christmas specialty brew look forward to this day every year. Only one tank of our winter warmer is produced each year. Rich malt flavours with plenty of depth and complexity. The perfect ale to sip on whilst curled up with a good book in front of a fireplace on a cold Saskatchewan winter night. We hope this special ale will last on tap until Christmas but the limited number of bottles will most likely be sold out in the blink of an eye. See you at 11:00! Dec. 15: Monday Night Jazz & Blues. A Ben Winoski White Christmas. Some seasonal favourites with some elements of jazz and blues from this talented acoustic act. 8:00 PM. Dec. 17: Wednesday Night Folk. The Regina Male Voice Choir. The annual one hour Christmas concert from Canada’s longest continually operating male voice choir returns! Don’t miss the procession of the massive boar’s head during the Boar’s Head Carol. Singing contests and prizes! This special concert starts at 8:00 PM. Dec. 22: Monday Night Jazz & Blues. The Ministry of Groove. Enjoy great 1970’s jazz funk and more. 8:00 PM. Dec. 24: Christmas Eve. Closed at 5:00 PM. Dec. 25. Closed. Merry Christmas! Dec. 29: Monday Night Jazz & Blues. 8’s Enuff. Great big band jazz from this mini big band. 8:00 PM. Dec. 31: Nothing For New Year’s #9. No noise makers, no band, no escalated drink prices, no cover charge, no midnight champagne, no dancing, no line-ups, no hassle, no problem. Come spend a relaxing evening at the good 'ol Bushwakker as we welcome 2015. Perhaps try Chef Mike's special prime rib and jumbo Yorkshire pudding New Year's Eve dinner. Our most popular non-event of the year! 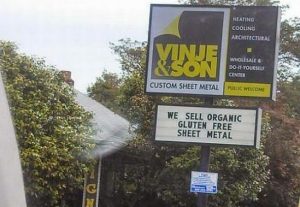 ‘Any Canadian beer should be treated as a domestic product’

By Gordon Isfeld, Financial Post December 2, 2014 OTTAWA – Restrictions on the flow of goods between provinces and regions in Canada could not be more irksome than those on booze. Buy a few bottles of wine or cases of beer here, can’t take it there. It affects companies’ ability to expand and their customers’ right to choose. Case in point: Beau’s Brewing Ltd., one of the most successful craft breweries in the country, but red tape has meant its products are not available across all borders. This is where barriers to interprovincial trade raise their ugly head. We've all heard the stories of Canadians sneaking beer, wine and stronger stuff into other provinces because they are not available in local outlets, provincially operated liquor stores in particular. “Each province has drawn up a completely different framework for beer. And if you’re from out of province, you’re literally considered foreign,” said Steve Beauchesne, president and CEO of Beau’s All Natural Brewing Co. The family-run company was launched in 2006 and chose to locate in Vankleek Hill, Ont., near the border with Quebec, in order to tap into the huge markets for beer in both provinces. That didn’t happen. Quebec regulators were less than welcoming and Beau’s instead looked south, to New York State, where the company found more success. For Canada breweries, the major problem is in the details. “You have to go, literally, province-by-province. And they all have different waiting rules and they all have different application processes. And they all have different tax rates and they all have different treatment of out-of-province beer,” Mr. Beauchesne said. Going into New York State, “we only had to fill out one form.” “I think a big reason for the beer explostion has happened faster and more dramatically in the United States is because it’s much easier for them to go across state borders. So they can build their market share up that much quicker,” he said. “Any Canadian beer should be treated as a domestic product. That’s the biggest and boldest step that could be taken. That way a brewery could sell into any province they wanted, being treated the same as any craft beer brewed in that province.”

The psychiatrists were attending their first seminar on emotional extremes. "Just to establish some parameters," said the leader, "Mr. Nichols, what is the opposite of joy?" "Sadness," said the student. "And the opposite of depression, Ms. Biggs?" "Elation." "And you sir, how about the opposite of woe?" Bubba replied, "I believe that would be giddyup." At the police station, Bubba explained to the police officer why his cousins shot him. "Well," Bubba began, "We wuz havin' a good time drinking, when my cousin Ray picked up his shotgun and said, 'Hey, der ya fellows wanna go hunting?'" "And then what happened?" the officer interrupted. "From what I remember," Bubba said, "I stood up and said, 'Sure, I'm game.'" A hunter was rushed into the emergency room with a bear trap clamped onto his testicles. As the horrified doctor was examining him, he said "Man, how did this happen?"
The hunter explains that he was out in the woods and felt the call of nature. Bending down by a tree, the bear trap was triggered and snapped shut on his testicles. "Oh," exclaims the doctor, "The pain must have been excruciating!"
"It was," said the hunter. "The second worst pain in my life." "Second worst? What could have been worse than that?" "Coming to the end of the chain" said the hunter. Billy Bob and Luther were talking one afternoon when Billy Bob tells Luther, "Ya know, I reckon I'm 'bout ready for a vacation. Only this year I'm gonna do it a little different. The last few years, I took your advice about where to go. Three years ago you said to go to Hawaii. I went to Hawaii and Earlene got pregnant. Then two years ago, you told me to go to the Bahamas,and Earlene got pregnant again. Last year you suggested Tahiti and darned if Earlene didn't get pregnant again." Luther asks Billy Bob, "So, what you gonna do this year that's different?" Billy Bob says, "This year I'm taking Earlene with me." 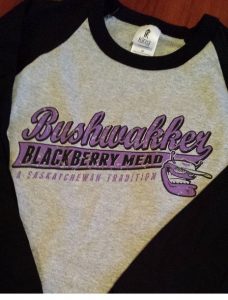 Our 2014 edition of the Bushwakker Blackberry Mead T-Shirt