Our premium wine features for November are Chateau Le Prieur Wines from France.  The white is Entre Deux Mers Bordeaux, using Sauvignon Blanc/Semillon/Muscadelle grapes.  The red is Cuvee Passion Bordeaux, using Merlot/Cabernet Franc/Cabernet Sauvignon grapes. Both are $7.50 for a glass and $21.95 for a half litre. Our guest import tap now offers Black Bridge Brewing IPA for $7.95 a pint.  Next up will be the Saugatuck Neapolitan Milk Stout from Michigan for $8.95 a pint.

Nov. 20: Science Pub edition #26 – Hacking And You! Presented by The University of Regina Faculty of Science and The Bushwakker Brewpub. Our wildly popular monthly Science Pub Series will conclude for 2014 and return again on Thursday, January 15, 2015. Enjoy lectures on scientific t3opics of general interest in our Arizona Room (main floor banquet room) over beer and snacks. The room opens at 5:00 PM and quite often is full by 6:00 PM. Avoid disappointment and come down early for dinner and a pint before the presentation which begins at 7:00 PM. This month's lecture will be presented by AJ Wiebe and Patrick Ullrich and is entitled Hacking and You: Why you're probably already using hacked software – legally. Nov. 24: Monday Night Jazz & Blues. The Jazz Band-Its. Over 20 members comprise this very big band that plays big-band jazz. 8:00 PM Nov. 26: Wednesday Night Folk. Ron Loos & Friends. Local talented guitar plucker is joined by various musicians performing tasty acoustic blues, folk and rock. 9:00 PM. Nov. 29: The 26th Bushwakker Single Malt Scotch Tasting Event. 7:30 PM. Sold Out, but you can still order the special Scotch-based dinner. Orkney Island Poached Egg A poached egg served on crostini made with Highland Park. Topped with a peppercorn marinated pork belly and roasted pumpkin seeds Macallan Ham Hocks Tender  ham hock braised in Macallan and served with barley risotto, charred cherry tomatoes and kale crisps        $28.95 White Chocolate Bread Pudding A moist and rich bread pudding made with Bernard Callibault white chocolate chunks and toasted pecans. Drizzled with a scotch infused raisin caramel sauce and served with Glenmorangie vanilla bean ice cream. Pure decadence!          $8.95 Dec. 1: Monday Night Jazz & Blues. Shane & Ethan Reoch. Regina’s friendliest bluesman is joined by his son who will be celebrating his 19th birthday. What a night this will be! 8:00 PM. Dec. 3: Wednesday Night Folk. Bears in Hazenmore. Ambient, indie folk group from the heart of the prairies. 9:00 PM.

The science of skunky beer (and how to prevent it)

With October just a few days away, beer lovers are buzzing in anticipation. But there's bad news: Even though it's cool and breezy out, your beer can still get skunked. Although many think that "skunking," or the phenomenon of beer developing a putrid taste and smell, is caused by heat, it's actually caused by light exposure. When hops are boiled down to make beer, they release chemical compounds called Iso-Alpha Acids. They're bitter on their own, but when exposed to sunlight they break down and interact with other molecules in the beer to produce a molecule that's almost identical to the one in a skunk's smelly spray. And it's so strong that if you put one eyedropper of the chemical in an Olympic pool full of beer, you'd change the taste -- which would surely ruin your boozy backstroke. Hot beer can get stale more quickly, but it won't skunk. It's all about that sunshine, which is why most beers are sold in dark glass containers or solid aluminum cans. If a beer comes in a light glass bottle, it probably uses a chemically modified form of hops instead of the real thing -- but skunking can still occur. So whatever your brew of choice at Oktoberfest, stay in the shade. 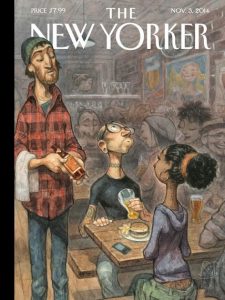 No brewery, no problem for Copenhagen’s Mikkeller

By Gary Dzen  November 11, 2014 How do you make beer without a brewery? The absence of a dedicated brewing space hasn’t stopped Mikkel Borg Bjergso, namesake and founder of the Copenhagen-based brand Mikkeller, from being unusually prolific. In an e-mail, Bjergso writes that he’s released around 600 different beers in eight years. Choosing just one can be daunting, but it helps to know that all of Mikkeller’s beers are brewed “somewhere else.” Bjergso writes exacting recipes for each, then is sometimes present and sometimes not when they’re made. The results, packaged at breweries all over the world and shipped to 40 countries, qualify more as artistic expressions and passing fancies rather than staples. If you liked the Mikkeller oatmeal stout you had last week, don’t expect to get it again. The vast majority of Mikkeller beers are brewed only once, making it hard to sample all, even for consumers who pay close attention. Brews don’t adhere to any particular genre or style guidelines; Mikkeller’s canon includes IPAs brewed with licorice and lambics made with rhubarb. Recently at a shop, I spotted nearly a dozen Mikkeller offerings, the colorful labels popping off the shelf. Designed by Keith Shore, an American who also does merchandise design for the rock band the Shins, the labels are canvases painted with pinks and yellows, and cartoon drawings of French press coffee makers. Mimicking the beers themselves, Mikkeller, the brand, is nothing if not eclectic. “I don’t fear that the many styles will be a bad thing for Mikkeller,” Bjergso writes. “I actually think this is what people love us for.” A bottle of Wheat Is the New Hops, a collaboration with Vermont’s Grassroots Brewing, is an India Pale Ale, brewed with wheat and fermented with Brettanomyces, a yeast strain known for imparting funky flavors. It was brewed at De Proefbrouwerij, in Lochristi-Hijfte, Belgium. The beer pours a pale yellow and wafting up from the liquid is a musty combination of mothballs and freshly squeezed oranges. As a fan of both funky beers and IPAs, I found that inviting. Sometimes the best way to describe a beer is to say what’s missing. There’s no assertive IPA bitterness in this brew, replaced by mellow passion fruit and mango notes from the hops. There’s a lack of a true barnyard funk, but the Brettanomyces dries the beer out and adds complexity. Bjergso writes that Wheat Is the New Hops is “taking the best from two worlds and combining them into something unique and complex.” The brewery has never tried to be one thing. In addition to the beer line, Bjergso owns bars in Copenhagen, Stockholm, San Francisco, and Bangkok. Chefs from places like Noma, in Copenhagen, rely on him to come up with beers for their menus. Bjergso has a lot of irons in the fire. Keep up if you can.

Three members of a golf club were arguing loudly while the fourth member of their group lay dead in a bunker. A club official was called to calm the row. "What's the trouble here?" he asked. "My partner has had a stroke, and these two bastards want to add it to my score." The room was full of pregnant women and their partners, and the Lamaze class was in full swing. The instructor was teaching the women how to breathe properly, along with informing the men how to give the necessary assurances at this stage of the plan. The teacher then announced, "Ladies, exercise is good for you. Walking is especially beneficial. And, gentlemen, it wouldn't hurt you to take the time to go walking with your partner!" The room really got quiet. Finally, a man in the middle of the group raised his hand. "Yes?" replied the teacher. "Is it all right if she carries a golf bag while we walk?" 1. Chicago Cubs outfielder Andre Dawson on being a role model: "I wan' all dem kids to do what I do, to look up to me. I wan' all the kids to copulate me." 2. New Orleans Saint RB George Rogers when asked about the upcoming season: "I want to rush for 1,000 or 1,500 yards, whichever comes first." 3. And, upon hearing Joe Jacobi of the 'Skins say: "I'd run over my own mother to win the Super Bowl, "Matt Millen of the Raiders said: "To win, I'd run over Joe's Mom, too." 4. Torrin Polk, University of Houston receiver, on his coach, John Jenkins: "He treats us like men. He lets us wear earrings." 5. Senior basketball player at the University of Pittsburgh : "I'm going to graduate on time, no matter how long it takes." 6. Bill Peterson, a Florida State football coach: "You guys line up alphabetically by height." And, "You guys pair up in groups of three, and then line up in a circle." 7. Boxing promoter Dan Duva on Mike Tyson going to prison: "Why would anyone expect him to come out smarter? He went to prison for three years, not Princeton ." 8. Stu Grimson, Chicago Blackhawks left wing, explaining why he keeps a color photo of himself above his locker: "That's so when I forget how to spell my name, I can still find my clothes." 9. Chuck Nevitt , North Carolina State basketball player, explaining to Coach Jim Valvano why he appeared nervous at practice: "My sister's expecting a baby, and I don't know if I'm going to be an uncle or an aunt." 10. Frank Layden , Utah Jazz president, on a former player: "I told him, 'Son, what is it with you? Is it ignorance or apathy?' He said, 'Coach,I don't know and I don't care.'" 11. Shelby Metcalf, basketball coach at Texas A&M , recounting what he told a player who received four F's and one D: "Son, looks to me like you're spending too much time on one subject." 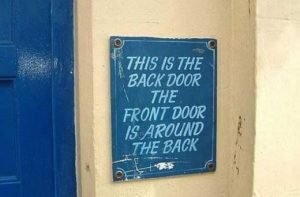