Urbanspoon has just declared that the Bushwakker is the number one place in Regina for both Burgers and Pizzas.  Our premium wine features for November are Chateau Le Prieur Wines from France.  The white is Entre Deux Mers Bordeaux, using Sauvignon Blanc/Semillon/Muscadelle grapes.  The red is Cuvee Passion Bordeaux, using Merlot/Cabernet Franc/Cabernet Sauvignon grapes. Both are $7.50 for a glass and $21.95 for a half litre. Our guest import tap now offers Beer Here Harwood Brown Porter from Denmark. $8.95 for a pint. Next up will be Black Bridge Brewing IPA for $7.95 a pint.

Posted By Jonathan Wells on Mon, Oct 27, 2014  Yesterday, I witnessed the Panthers put forth great effort, yet come up just short. I’m not talking about their performance on the field versus the Seahawks, yet it still certainly applies. No, I’m referring to something that can be found outside section 101 — the Beer Garden. It’s not the Beer Garden itself I have a problem with. The Panthers organization has really outdone itself here, making a point to feature craft beer from across both Carolinas. Charlotte favorites NoDa and Olde Mecklenburg can be found here, as well as offerings from Foothills and RJ Rockers. And kudos to them for making this one of many places to find local craft beer inside Bank of America Stadium. My problem is simple — located just underneath a sign touting the “Local Craft” offerings is a prominent beer cart that peddles wares that are neither local nor craft. 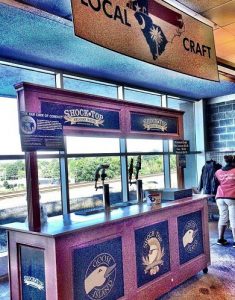 So, much like a screen pass on 4th and 25, let’s talk about the bungled call combination of Shock Top and Goose Island being served in the “Local Craft” section. Really fast, let’s break down what constitutes craft beer, so you can begin to see the fumble. To be considered a craft brewer, you must be small (producing less than 6 million barrels a year) and you must be independent (less than 25 percent owned by a non-craft brewer). These aren’t definitions I made from whole cloth; this is from the Brewers Association, the trade group representing craft brewers nationwide. In 2012, 600,000 barrels of Shock Top were produced, doubling its production from the year before. “But isn’t that well under the 6 million barrel figure you just quoted?” you might ask. Yes, and if Shock Top wasn’t just a figment of Anheuser-Busch’s imagination and was an actual stand-alone brewery, it’d fit the Craft definition. Speaking of “owned by Anheuser-Busch,” let’s talk about Goose Island. That’s right, “Chicago’s Craft Brewery” got bought back in 2011, and lost its Craft Brewery designation in the purchase. In summary, Shock Top and Goose Island — not Craft. Alright, now let’s look at that “Local” word. Anhueser-Busch operates 12 breweries across the country, but none of them in the Carolinas. Closest one to us would be in Cartersville, Georgia: 275 miles away and in Falcons territory, no less. I couldn’t find any figures on where exactly Shock Top is made, but, assuming it’s made in Georgia, that’d disqualify it from fitting under the “Local” designation. The Goose Island being poured is a little easier to source, with those kegs coming from either Fort Collins, Colorado, or Baldwinsville, New York. Say it with me now: Shock Top and Goose Island, not local. Panthers, I appreciate the craft beer attention, I really do. I had to walk not a handful of sections to buy my cans of Hop, Drop & Roll. It’s never been easier to find craft beer in your stadium. I just have a problem with non-craft beer being poured in your craft section, and being passed off as something it’s not. It’s akin to me hawking unlicensed Panthers T-shirts in the lots, an action I’m sure would get the attention of your lawyers. I’m sure you have more pressing matters to attend to, like preparing to host the Saints on Thursday. But would you at least consider sliding that non-local, non-craft beer cart out from under that “Local Craft” sign, at least just a few yards? Perhaps Jonathan Stewart could do it, since he was good for 79 yards yesterday. Ed. Note: This article raises several interesting questions, not the least of which is “When will we be able to buy a craft beer at Roughrider games?” Mr. Wells makes a valid point that Shock Top and Goose Island are not local, but we would quibble with his characterization of these beers as not being craft beer. So the question on the table today is “What is a craft beer?” The Brewer’s Association (of which the Bushwakker is a member) defines a craft beer in highly quantifiable terms as follows: Small: Annual production of 6 million barrels of beer or less (approximately 3 percent of U.S. annual sales). Beer production is attributed to the rules of alternating proprietorships. Independent: Less than 25 percent of the craft brewery is owned or controlled (or equivalent economic interest) by an alcoholic beverage industry member that is not itself a craft brewer. Traditional: A brewer that has a majority of its total beverage alcohol volume in beers whose flavor derives from traditional or innovative brewing ingredients and their fermentation. Flavored malt beverages (FMBs) are not considered beers. These are easily measured and serve well when legal matters are involved. However, we take some issue with the “independent” criterion, in spite of the fact that we were among those who coined and promulgated the phrase “Industrial Brewery” for those breweries that make North American mainstream beer. However, if a beer has full flavour in the tradition of a classic beer style, we don’t really care who owns the brewery. We’ve known the people at Goose Island now for decades and we included a story about some of their more interesting beers in the Wakker Weekly a few years ago. More recently we had an opportunity to sample one of those beers, Sofie. It’s a highly carbonated Saison style Farmhouse Ale, with citrus tartness and spice. I don’t care that much that the brewery is owned by Anheuser Busch, as long as they don’t mess with the beer. I really enjoyed Sofie and I’ll be looking for more.

1. I thought I saw an eye doctor on an Alaskan island, but it turned out to be an optical Aleutian. 2. She was only a whisky maker, but he loved her still. 3. No matter how much you push the envelope, it'll still be stationery. 4. Two silk worms had a race. They ended up in a tie. 5. Time flies like an arrow. Fruit flies like a banana. 6. Atheism is a non-prophet organization. 7. A small boy swallowed some coins and was taken to a hospital. When his grandmother telephoned to ask how he was, a nurse said, 'No change yet.' 8. A chicken crossing the road is poultry in motion. 9. It's not that the man did not know how to juggle, he just didn't have the balls to do it. 10. The short fortune-teller who escaped from prison was a small medium at large. 11. A backward poet writes in verse. 12. Don't join dangerous cults: Practice safe sects. The Doctor said: "The good news is I can cure your headaches...The bad news is that it will require castration. You have a very rare condition which causes your testicles to press up against the base of your spine and the pressure creates one hell of a headache. The only way to relieve the pressure is to remove the testicles." Joe was shocked and depressed. He wondered if he had anything to live for. He couldn't concentrate long enough to answer, but decided he had no choice but to go under the knife. When he left the hospital, he was headache free for the first time in over 20 years, but he felt as if he was missing an important part of himself. As he walked down the street he realized he felt like a different person. He could make a new beginning and live a new life. He saw a men's clothing store and thought, "That's what I need, a new suit." The elderly salesman eyed him quickly and said, "Let's see, you're a size 44 long." Joe laughed and said, "That's right, how did you know?" "Been in the business 60 years!" Joe tried on the suit. It fit perfectly. As Joe admired himself in the mirror, the tailor asked, "How about a new shirt?" Joe thought for a moment and then said, "Sure." "Let's see, 16 and a half neck, 34 sleeve." Joe was surprised. "How did you know?" "Been in the business 60 years." The shirt fit perfectly. As Joe looked at himself in the mirror, the salesman said, "You could use new shoes." Since Joe was on a roll, he said, "Sure." The man eyed Joe's feet and said, "9-1/2E." Joe was astonished. "That's right. How did you know?" "Been in the business 60 years." Joe tried on the shoes and they also fit perfectly. As Joe walked comfortably around the shop, the salesman asked, "How about new underwear?" Joe thought for a second and said, "Why not." The man stepped back, eyed Joe's waist and said, "Let's see, size 36." Joe laughed. "Finally I've got you! I've worn size 32 since I was 18 years old." The tailor shook his head. "You can't wear a size 32. Size 32 underwear would press your testicles against the base of your spine and give you one hell of a headache." 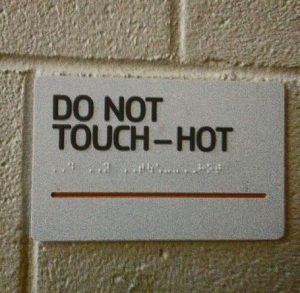