Our premium wine features for November are Chateau Le Prieur Wines from France.  The white is Entre Deux Mers Bordeaux, using Sauvignon Blanc/Semillon/Muscadelle grapes.  The red is Cuvee Passion Bordeaux, using Merlot/Cabernet Franc/Cabernet Sauvignon grapes. Both are $7.50 for a glass and $21.95 for a half litre. Our guest import tap now offers Centennial Rye Ale from Saskatchewan’s newest microbrewery, Black Bridge, located in Swift Current. $7.95 for a pint.  Next will be the Beer Here Harwood Brown Porter from Denmark.

Oct. 31: Bushwakker Celtic Halloween Party. What a Friday night this will be! Rollicking Celtic reels from The Tilted Kilts, Great Pumpkin Spiced Brown Ale on tap and a Halloween costume contest where the winner will receive a $100 Bushwakker gift card. $5 cover charge. Sat. Nov. 1: Tickets Go On Sale to the November 29th Bushwakker Single Malt Scotch Tasting Event. One of our most highly anticipated events of the year! Only 150 tickets will be made available at $74.94 each at 11:00AM sharp! Enjoy six special imported single malt scotches, highland dancing and a pipe band performance from the Regina Police Pipes & Drums with members of The Fraser Pipe Band. This year’s single malt offerings include: The Dalmore 15 year, Auchentoshan Valinch 2012 limited release, Isle of Jura Prophecy, Longrow Red 11 year Australian Shiraz Cask, Pittyvaich 18 year and the Glendronach Cask Strength A Batch #3.  A special meal, using Single Malt Scotches, will also be available that evening. Orkney Island Poached Egg A poached egg served on crostini made with Highland Park. Topped with a peppercorn marinated pork belly and roasted pumpkin seeds Macallan Ham Hocks Tender  ham hock braised in Macallan and served with barley risotto, charred cherry tomatoes and kale crisps                      $28.95 White Chocolate Bread Pudding A moist and rich bread pudding made with Bernard Callibault white chocolate chunks and toasted pecans. Drizzled with a scotch infused raisin caramel sauce and served with Glenmorangie vanilla bean ice cream. Pure decadence!                      $8.95 We have received many inquiries about the ticket release date this year. All tickets will probably be gone in a few hours. Don’t delay! Nov. 3: Monday Night Jazz & Blues. The U of R Jazz Band. Come see some of Regina’s future jazz stars. 8:00 PM. Nov. 5: Monthly ALES Meeting. One of the top amateur home brewing clubs in the country continues to attract more and more new members. If you are interested in getting into the art of home brewing or would like to improve your skills, come down to the Bushwakker basement clubroom at 8:00 PM and sit in on a meeting. This month’s topic of presentation is High gravity brewing; Barleywine. Nov. 5: Wednesday Night Folk. MYLA. Multi-award winning singer/songwriter/guitarist performs her acoustic soul/jazz/fusion set with pianist Dan Flagal. 9:00 PM.
Nov. 7: First Firkin Friday. Don’t miss the pomp and circumstance as a piper from The Fraser Pipe Band leads a small keg of specially created beer (the firkin) in a procession throughout the pub. A volunteer is selected to tap the firkin and delicious suds tend to soak all those in near proximity. Tapping takes place at 5:30 PM and the pub is generally quite full by 4:00 PM. Don’t miss this great longstanding Bushwakker tradition! Nov. 8: Riders vs Eskimos. Our beloved Team Green will be looking to avenge their 24-19 recent home game loss to Edmonton. We open at 11:00 AM and kickoff is at 6:00 PM. Be sure to stop by The Bushwakker before, during or after the game and enjoy our Eskimo Burger & a Pint game day feature. Think of it as “devouring” the competition! Nov. 10: Monday Night Jazz & Blues. Whiteboy Slim. Toronto Exclusive Magazine Music Awards best blues artist, best blues CD and best blues song. 8:00 PM. Nov. 11: Open at noon on Remembrance Day. Nov. 12: Wednesday Night Folk. Buffalo Narrows. Popular group brings various musical styles together to create their unique brand of music. 9:00 PM. Nov. 17: Monday Night Jazz & Blues. The Jeff Mertick Band. Soulful, powerful blues from the Regina blues veteran. 8:00 PM. Nov. 19: Wednesday Night Folk. The Stillhouse Poets. Prairie gothic, Mississippi Delta, Appalachian mountains-inspired roots duo. 9:00 PM. Nov. 20: Science Pub edition #26 – Hacking And You! Presented by The University of Regina Faculty of Science and The Bushwakker Brewpub. Our wildly popular monthly Science Pub Series will conclude for 2014 and return again on Thursday, January 15, 2015. Enjoy lectures on scientific topics of general interest in our Arizona Room (main floor banquet room) over beer and snacks. The room opens at 5:00 PM and quite often is full by 6:00 PM. Avoid disappointment and come down early for dinner and a pint before the presentation which begins at 7:00 PM. This month's lecture will be presented by AJ Wiebe and Patrick Ullrich and is entitled Hacking and You: Why you're probably already using hacked software – legally. Nov. 24: Monday Night Jazz & Blues. Tony Kaye Trio. Calgary group delivers high energy, original electric blues in the tradition John Lee Hooker, Gary Clark Jr., and Stevie Ray Vaughan. 8:00 PM. Nov. 26: Wednesday Night Folk. Ron Loos & Friends. Local talented guitar plucker is joined by various musicians performing tasty acoustic blues, folk and rock. 9:00 PM. Nov. 29: The 26th Bushwakker Single Malt Scotch Tasting Event. 7:30 PM. 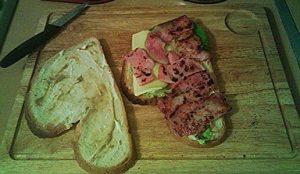 Scientists have discovered why beer smells so good -- and it has nothing to do with us. Beer, that living, breathing elixir, smells the way it smells to appeal to a totally different species. A pair of Belgian researchers (where else could they be from, right?) has accidentally stumbled on the answer to a question that’s puzzled drunkards for generations: why does this beer smell so good? Like so many scientific advances, this one came when the researchers left some beer out overnight. The most important ingredient in beer, in the actual creation of the beverage, isn’t hops or malt: it’s yeast, the single-celled fungus that also gives us bread. The yeast eats sugars and farts out both carbon dioxide (to make the beer fizzy) and alcohol (we all know what this does, right?). And it turns out, the yeast is also responsible for that special sweet, almost fruity scent of beer. But why? The fact that beer smells fruity isn’t an accident. The smell is comprised of chemical compounds that smell intentionally like overripe fruit, so as to attract not humans but the real target: fruit flies.When fruit flies come flocking to beer, they feed on the sugars left behind by the yeast, but also pick up some of the yeast in the hairs on their teeny little legs. That enables the yeast to fly where the flies fly, and spread its wonderful yeastiness more widely than it could otherwise. But the researchers weren't trying to figure this out; in the course of experimenting on how yeast contributes to flavor, the researchers had left some improperly sealed specimens of beer sitting out in the lab. One of these included some yeast that had been modified to remove a certain gene that’s responsible for letting loose with those lovely scented chemicals. The researchers weren't surprised to find that fruit flies had discovered their stock of beer, but they were surprised that the flies seemed to ignore the mutant scent-free yeast beer. Further experiments revealed why: the yeasts release scents specifically for fruit flies. So, the next time you leave out a bottle of beer and your roommate seems upset that your apartment is covered in fruit flies, just let the roommate know that you’re attempting to replicate a respectable experiment conducted by beer-loving Belgian scientists (another good argument: it makes kids smarter). Then clean up the beer. 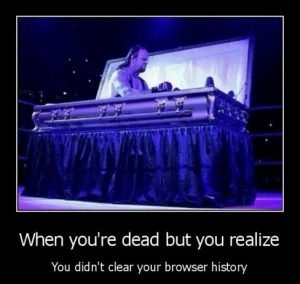 Two rednecks met in a bar and decided that they weren't going anywhere in life so thought they should go to college to get ahead. They hop in a pickup and drive to the nearest college. While the second one waits out in the hall, the first goes in to one of the rooms and finds a professor who advises him to take Math, History, and Logic. 'What's Logic?' asked the first redneck. The professor replied, 'Let me give you an example: Do you own a weedeater?' 'I sure do,' grinned the redneck. 'Then I can assume, using logic, that you have a yard,' replied the professor. 'That's real good,' the redneck responded in awe. The professor continued: 'Logic will also tell me that since you have a yard, you also have a house.' Impressed, the redneck shouts 'AMAZIN'!' 'And since you own a house, logic dictates that you have a wife.' 'Betty Mae... this is incredible!' (The redneck is catching on.) Finally, since you have a wife, logically I can assume that you are heterosexual,' says the professor. 'You're absolutely right! Why that's the most fascinatin' thing I ever heard of. I cain't wait to take this here logic class.' The first redneck, grinning ear to ear with pride at the new world opening up to him, walked back into the hallway where his friend is waiting. 'So what classes are ya takin'?' The friend asked. 'Math, History, and Logic,' replies the first redneck. 'What in tarnation is Logic?' asked his new friend. 'Let me give you an example. Do ya own a weedeater?' 'No,' his friend replied. You're queer, ain't ya? After having their 11th child, an Alabama couple decided that was enough, as they could not afford a larger bed. So the husband went to his doctor/veterinarian and told him that he and his wife/cousin didn't want to have any more children. The doctor told him that there was a procedure called a vasectomy that could fix the problem but that it was expensive. A less costly alternative, said the doctor, was to go home, get a cherry bomb, light it, put it in a beer can, then hold the can up to his ear and count to 10. The Alabamian said to the doctor, "I may not be the smartest man in the world, but I don't see how putting a cherry bomb in a beer can next to my ear is going to help me." "Trust me," said the doctor. So the man went home, lit a cherry bomb and put it in a beer can. He held the can up to his ear and began to count: "1, 2, 3, 4, 5," at which point he paused, placed the beer can between his legs, and resumed counting on his other hand.

Our weekend Seafood Feature is Bouillabaisse. $16.95