Our premium wine features for October are from the Santa Margherita Winery in Tuscany, Italy. The red is Chianti Classico D.O.C.G. (Sangiovese). The white is Pinot Grigio Valdadige D.O.C. Both are $8.95 for a glass and $26.95 for a half litre. Our guest import tap now offers Le Trou Du Diable Punkrauch from Quebec. $8.95 for a pint.

Oct. 18: Annual Great Pumpkin Spiced Brown Ale Release. The popularity of this autumn specialty Bushwakker brew continues to grow and we hope to meet the demand this year. For the first time ever we will brew a double batch of our pumpkin beer. One tank will be served on tap and the other will be bottled. Only 200 six packs will be made available and will go on sale at 11:00 AM. Limit of 12 bottles per person. Last year we released the take home bottles on two separate dates and on both occasions the bottles were sold out in minutes. Cinnamon, nutmeg, fresh ginger, vanilla and cloves make for a delicious ale that tastes just like pumpkin pie. We do expect a line-up that morning so plan to arrive a bit early to avoid disappointment. Oct. 19: Eskimos vs. Riders. Ever wonder what it is like to be at The Bushwakker on a Rider home game Sunday?  This is your last opportunity of the year. Enjoy our Eskimo Burger & a Pint feature before, during or after the game. Kick-off is at 2:00 PM and we will open at 11:00 AM. Come offer the Riders your symbolic support by `devouring` the competition. Go Riders go! Oct. 20: Monday Night Jazz & Blues. `round Midnight. Popular band plays popular jazz and adult contemporary tunes. 8:00 PM. Oct. 22: Wednesday Night Folk. Bradford. Brad Papp is once again reunited with talented musician, Mark Radford. 9:00 PM. Oct. 27: Monday Night Jazz & Blues. Call Me Mildy. Local act plays original alternative blues. 8:00 PM. Oct. 29: Wednesday Night Folk. Brian Baggett. Brian is one of only 7000 Chapman Stick players in the world. Don`t miss this rare opportunity to hear original compositions and uniquely arranged standards. 9:00 PM. Oct. 31: Bushwakker Celtic Halloween Party. What a Friday night this will be! Rollicking Celtic reels from The Tilted Kilts, Great Pumpkin Spiced Brown Ale on tap and a Halloween costume contest where the winner will receive a $100 Bushwakker gift card. $5 cover charge. Sat. Nov. 1: Tickets Go On Sale to the November 29th Bushwakker Single Malt Scotch Tasting Event. One of our most highly anticipated events of the year! Only 150 tickets will be made available at $74.94 each at 11:00AM sharp! Enjoy six special imported single malt scotches, highland dancing and a pipe band performance. We have received many inquiries about the ticket release date this year. All tickets should be gone in a few hours. Don’t delay!

By: Will Gordon We the people like to complain about every damn thing in the world, and for some strange reason, we've settled on pumpkin beer as one of the things to complain about the most. The stuff sells outrageously well, and in so doing serves as a gateway beer guiding people out of the macro cooler, even if just for a couple months before they return to their repulsive Bud Light comfort zone. This makes a lot of unbalanced people very angry. I think pumpkin beer's popularity is great. I've long maintained that Guinness is enormously important and probably underrated, because although hardcore beer geeks are tired of it, a single pint of Guinness on St. Patrick's Day is the only good beer a lot of drinkers encounter all year. I think the same logic applies here. My wife drinks a lot of fancy beer these days, because that's the one thing I'm good for around the house; if we'd never met, we'd both live much poorer lives, me because she pays for everything, and her because she might still be drinking Corona 11 months a year and Shipyard Pumpkinhead the 12th. That's not as good as drinking the gourmet shit year-round, but it's better than the endless bummer of an eternal Corona binge. Pumpkin beer is good for beer culture, which is what makes it all the more baffling that my social-media feeds are crudded up earlier and earlier every year with people whining about seasonal creep regarding pumpkin beer. Some varieties start hitting the shelves in August these days, which means anyone looking to be the first to bitch about them needs to fire up his (probably his) Twitter indignation while the mid-summer bottle-rocket fumes are still in the air. It's ridiculous, and one of the most pathetic examples of the way too many us (me included, I'm sure) feel the need to define ourselves based not on what we like and value, but instead on what we're sick of, too cool for, or fake-outraged about. 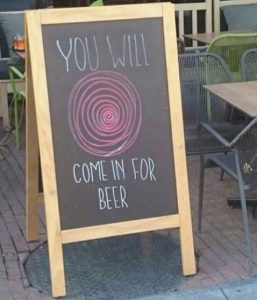 Huffing Post United Kingdom  Stuart Forster  The Canadian province of Saskatchewan has much to offer foodies who enjoy a casual approach to dining and big flavours. As you might expect from one of Canada's western provinces, steaks are popular but there's also plenty more for discerning diners. Bushwakker (2206 Dewdney Avenue, tel. +1 306 359 7276) is best known as a brewpub rather than a restaurant but its eclectic offering of freshly made comfort food proves popular with diners. You can choose from dishes including fish and chips, wild boar burger, a pulled pork and apple pizza plus Cajun-style jambalaya. The menu changes on a seasonal basis. This pub-restaurant opened its doors in January 1991 within a warehouse that was built just prior to the outbreak of World War One. The result is a roomy venue with a laid-back atmosphere. Blues and jazz acts perform here on Mondays while folk musicians take to the stage on Wednesdays. Bushwakker is within easy walking distance of the Mosaic Stadium at Taylor Field, the home of the Canadian Football League's Saskatchewan Roughriders, and proves especially lively on match days. In one corner of the building you can see a handful of the stainless steel vessels which Mitch Dalrymple, the head brewer, uses to go about his work. The majority of tanks are located down in the cellar. A selection of the beers brewed on-site are available throughout the year while some of the ales and lagers - including the Premium Pale Ale, Chico IPA and Dalrymple Dunkel - are seasonal. 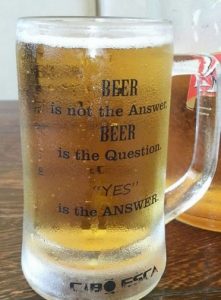 Behind the Scenes at the World's Greatest Beer Fest, sept 24-26

By: Bryan Rogala We love beer, so we sent one of our editors to the 2014 Great American Beer Festival (GABF) last weekend for some on-the-ground reporting and drinking. More than 49,000 people gathered in Denver’s Colorado Convention Center to sample over 3,500 types of beer at the three-day hops orgy. To the uninitiated, a beer fest of this magnitude can be a bit overwhelming—here’s what you need to know to navigate this pinnacle of beer events, even if you never make it to the conference center. There were more than 710 booths set up in the festival hall and attendees could easily end up wandering aimlessly and “sampling” far too much, only to miss out on the brews they really wanted to try. The Brewer’s Association developed this incredible tool to let you navigate the seemingly endless supply of beer. You can search by beer or brewery, read tasting notes, and map out your plan of attack. The best part: the app has preset “tours” based around different types of beer to guide you through the madness. Be prepared to wait, especially for anything that wins a medal, is rare, or comes from a popular brewery. Pro tip: try something from a lesser-known brewery first, so you can drink and pass the time in line while waiting for the popular stuff. Most breweries bring enough beer for the full festival and don’t start running out until Saturday night. When you finally make it to the front, be sure to chat up the folks pouring your sample—they’re likely the brewers. Everyone makes time for GABF, even big-names like Dogfish Head’s Sam Calagione and Samuel Adams’ Jim Koch. To split up sampling and avoid a potentially brutal hangover the next morning, check out the Homebrew Marketplace. Here you’ll find complete DIY kits, from the latest gadgets like the Picobrew Zymatic to info about local American Homebrewers Association clubs. The organization now has more than 43,000 members nationwide.

Ben was working at the lumberyard one day, pushing a tree through the saw, when he accidentally cut off all of his fingers. He quickly ran down the street to the emergency room. The doctor quickly examined his hands and asked for the fingers. "I don't have the fingers." Ben gasped through his pain. "What do you mean you don't have the fingers? We aren't living in the Dark Ages here! I can reattach those fingers and you'd be as good as new! Why didn't you bring the fingers?" "Gosh, Doc!" Ben yelled sarcastically. "I guess I couldn't pick 'em up!"

"Find Amelia Earhart yet?" "Can you hear me NOW?" "Could you write me a note for my wife, saying that my head is not, in fact, up there?" "You know, in some states, we're now legally married." "Any sign of the trapped miners, Chief?" "You put your left hand in, you take your left hand out.. You do the Hokey Pokey...." "Hey! Now I know how a Muppet feels!" "Hey, Doc, let me know if you find my dignity." "You used to be an executive at Enron, didn't you?" "Are we there yet? Are we there yet? Are we there yet?"