Our premium wine features for September are Pelee Island Lucky Stones VQA Wines from Ontario.  The white is a Sauvignon Blanc/Chardonnay/Scheurebe and the red is a Baco Noir/Cabernet Franc.  Both are $7.95 for a glass and $22.95 for a half litre. Our guest import tap now offers Adnams Broadside strong ale from England. $8.95 for a pint. After that we will tap our second offering from the new Nokomis microbrewery.  A brown ale for $7.95 a pint. Work on the washrooms continues.  The washrooms in the AZ room will normally be available when either the main men’s or women’s is not available.  However, in the event that a function has been booked into the AZ room (It’s hard to predict when both the AZ and the main room washrooms will be unavailable) there is a washroom east of the back entrance to the Bushwakker and another downstairs off the Club Room to the right of the stairs.

Sept. 21: Ottawa Redblacks vs. Saskatchewan Roughriders. It only happens a few times each year but this will be one of those rare Sundays when the Bushwakker will be open. Kick-off is at 2:00 PM and we will open at 11:00 AM. Be sure to enjoy our Redblack Burger & a Pint feature before, during or after the game. Go Riders go! Sept. 22: Monday Night Jazz & Blues. Shane & Ethan Reoch. Regina’s friendliest bluesman is joined by his son. 8:00 PM. Sept. 24: Wednesday Night Folk. Phantom Tide. An eclectic folk group with a pervasive Maritime sway. 9:00 PM. Sept. 29: Monday Night Jazz & Blues. The Jon Dyck Quartet. Talented ivory tickler leads this young jazz/R&B group. 8:00 PM. Oct. 18: Release of Great Pumpkin Spiced Brown Ale. 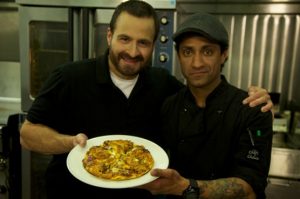 TV host, Chris Nannarone and Bushwakker sous chef, Trevor Maghoo  appear on Pizza Wars Monday, September 22 at 7:00 PM on CMT Chris Nannarone, host of Pizza Wars traveled to Regina, Saskatchewan earlier this summer to find the best pizza in the Queen City of the Prairies. Will it be the All Dressed from Tumblers, the BBQ Pork and Apple from Bushwakker or the Buffalo Chicken Pizza from La Bodega? Tune in to find out who will win the battle of Pizza Wars Regina!

John O'Reilly hoisted his beer and said, "Here's to spending the rest of me life, between the legs of me wife!"  That won him the top prize at the pub for the best toast of the night! He went home and told his wife, Mary, "I won the prize for the best toast of the night." She said, "Aye, did ye now.  And what was your toast?" John said, "Here's to spending the rest of me life, sitting in church beside me wife." "Oh, that is very nice indeed, John!" Mary said. The next day, Mary ran into one of John's drinking buddies on the street corner. The man chuckled leeringly and said, "John won the prize the other night at the pub with a toast about you, Mary." She said, "Aye, he told me, and I was a bit surprised myself.  You know, he's only been in there twice in the last four years.  Once I had to pull him by the ears to make him come, and the other time he fell asleep." A couple from Minneapolis decided to go to Florida for a long weekend to thaw out during one particularly icy winter. Because both had jobs, they had difficulty coordinating their travel schedules. It was decided that the husband would fly to Florida on a Thursday, and his wife would follow him the next day. Upon arriving as planned, the husband checked into the hotel. There he decided to open his laptop and send an e-mail to his wife back in Minneapolis. However, he accidentally left off one letter in her address, and sent the e-mail without realizing his error... In Houston, a widow had just returned from her husband's funeral. He was a minister of many years who had been "called home to glory" following his heart attack. The widow checked her e-mail, expecting messages from relatives and friends. Upon reading the first message, she fainted and fell to the floor. The widow's son rushed into the room, found his mother on the floor, and saw the computer screen which read: To: My Loving Wife From: Your Departed Husband Subject: I've Arrived! I've just arrived and have been checked in. I see that everything has been prepared for your arrival tomorrow. Looking forward to seeing you then! Hope your journey is as uneventful as mine. P.S. Sure is hot down here... McGregor called tech support to complain that he gets an "Access Denied" message every time he logs in. It turned out he was typing his username and password in capital letters. Tech Support: "Ok, let's try once more, but use lower case letters." McGregor: "Uh, I only have capital letters on my keyboard."

By Jeff Jacoby   September 10, 2014 If your drinking companions are French, you toast each other with “À votre santé !” With Russians, it’s “Za zdorovje!” For Spanish-speakers, “Salud!” In Hebrew, “L’chaim!” Perhaps it’s just a coincidence that when drinkers almost anywhere clink glasses, they are apt to invoke good health or long life. More likely, it reflects a truth humankind discovered long ago: Drinking alcohol can be a source of not only short-term enjoyment, but of long-term health benefits too. That may ring heretical at a time when headlines routinely sound alarms about the dangers of alcohol abuse. A search of the phrase “binge drinking” in Google News turns up nearly 7,000 recent articles. Many focus on the connection between drunkenness and campus sexual assault; others dwell on the serious consequences of drinking to excess, from alcohol poisoning to liver disease. No question about it: Binge drinking is unsafe and unhealthy. But moderate drinking can be just what the doctor ordered. A remarkable amount of research suggests that having one or two alcoholic drinks a day lowers most people’s risk of being stricken with heart disease, ischemic stroke, and even dementia. One major study published in 2010 by the Journal of the American College of Cardiology, for example, concluded that “in nine nationally representative samples of US adults, light and moderate alcohol consumption were inversely associated with CVD [cardiovascular disease] mortality, even when compared with lifetime abstainers.” Harvard’s School of Public Health notes on its nutrition website: “For most moderate drinkers, alcohol has overall health benefits.” In more than 100 long-term studies, many of which monitored their subjects’ health for 10 years or longer, researchers consistently documented a significant inverse association between moderate drinking and death from many forms of heart disease. And not just heart disease. Numerous studies bear out the finding that moderate drinkers tend to live longer than both teetotalers and heavy drinkers. According to sociologist David Hanson of the State University of New York at Potsdam, even the National Institute on Alcohol Abuse and Alcoholism — an organization plainly not inclined to downplay the potential dangers of liquor — has found that “the lowest death rate from all causes occurs at the level of one to two drinks each day.” Federal law has required a health-warning label on alcoholic beverages since 1988. Yet even the government’s own dietary guidelines, regularly revised by the Department of Agriculture and the Department of Health and Human Services, acknowledge that adult beverages confer “beneficial effects when consumed in moderation.” Fewer heart attacks, better cholesterol levels, reduced hospitalization rates, less weight gain, lower risk of dementia and cognitive decline — all these life-saving or life-enhancing advantages, the data suggest, are likelier to be found among men and women who down a daily drink or two than among those who never drink at all. Binge drinking is unsafe and unhealthy. But moderate drinking can be just what the doctor ordered. “The evidence that abstinence from alcohol is a cause of heart disease and early death is irrefutable,” writes addiction and public-health specialist Stanton Peele, “yet this is almost unmentionable in the United States.” Accompanying Peele’s essay at Substance.com is a picture of a classic Guinness beer ad proclaiming: “Guinness Is Good For You.” It turns out that having a beer — or a glass of wine, or a vodka tonic, or a bourbon on the rocks — really is good for most people. Yet brewers, distillers, and other alcoholic beverage manufacturers aren’t allowed to say so on their bottles. General Mills can tout the “heart-healthy” qualities of Cheerios on every cereal box; StarKist can do the same on cans of tuna. But Americans apparently can’t be  trusted with accurate information about the gains associated with moderate imbibing. The public health establishment plays down the benefits of drinking in moderation, no doubt for fear of sending any kind of encouragement to those who’ll be tempted to drink to excess. Regulators can be obsessive about stamping out any hint that alcoholic beverages might be good for you. The Treasury Department bureaucrat charged with approving beer labels, reported The Daily Beast last month, rejected a King of Hearts beer, on the grounds that its logo depicting a playing card “implied that the beer would have a health benefit.” Similarly, “he rejected an Adnams Broadside beer, which touted itself as a ‘heart-warming ale,’ because this supposedly involved a medical claim.” And what if it were? Alcohol has been known for centuries as “aqua vitae.” That’s Latin for “water of life,” and it could hardly be more aptly named. ED. Note: An internet search suggest that this issue has not been directly addressed in Canada. If it has, we’d like to know. 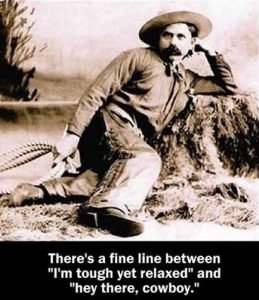