Our premium wines for July are Wayne Gretzky Okanagan VQA Wines from BC: The red is a Cabernet Sauvignon/Syrah. The white is a Pinot Grigio. Both are $7.95 for a glass and $22.95 for a half litre. Our guest tap now offers Cactus Tap tequila barrel aged and agave cerveza from the Prairie Sun Brewery from Saskatoon. $6.95 for a pint. We hope that you enjoy our wall decorations that show historical pictures from Regina’s past. We invite submissions of new pictures showing scenes from Regina’s past suitable for major enlargement and mounting on the wall in what was once the darts corner. Contact Kelly at kelly@bushwakker.com. If she uses your submitted image you will receive a Bushwakker $100 gift certificate.

The Bushwakker now offers two styles of growlers; Stainless Steel for $40 plus tax and glass for $15 plus tax. We fill all growlers and we also offer a growler cozy (an insulted carrying bag) for both growler styles, for $12 plus tax.We remind our growler customers that they may need to wait to get their growler filled when we are very busy. 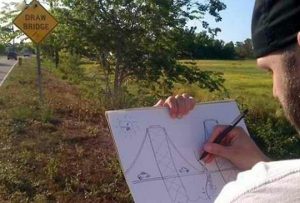 If you needed another clue that craft-beer-pretender Shock Top is the baby of Big Beer, look no further than these “viral” videos from Canadian ad agency Anomaly that rolled onto Shock Top’s YouTube channel last week. They are just what you might expect from a large corporation (A-B InBev) trying to act like one of the cool kids. In this series of clearly staged videos, Shock Top mascot “Wedgehead” – a talking orange slice with a mohawk – accosts various actors “unsuspecting beer lovers” in the beer aisle and at the bar, peppering them with quick-witted regular-guy quips about their appearance, their ability to attract the opposite sex, and other clearly scripted “spontaneous” conversations. The nature of these videos fit perfectly with the Shock Top brand – a highly calculated attempt to come off as authentic, but missing the mark by just enough to show that you’re a complete fraud. There are the actors, each clearly chosen to represent a demographic group Shock Top wants to target (one girl even has lots of tattoos – HOW GENUINE!). There’s the messaging, clearly on-brand, but hiding behind “irreverent” humor that supports the tagline, “Listen, you know I’m a good beer, I know I’m a good beer – we don’t have to talk about it, let’s chat about something else.” There’s the computer enhanced graphics in the beer aisle videos, made to look just like the real thing (but not the real thing). Yup – that’s Shock Top in a nutshell. Along with attempting to paint itself as a hip alternative to the mainstream, Shock Top also uses Wedgehead (ugh- that hurt to type) to take potshots at their craft beer competitors (you know, beers that are actually made in small batches by independent breweries). In one of the videos entitled “My dad is losing his Mohawk,” the edgy wedge proclaims, “You guys know these beers…they’re trying too hard, you know what I mean? Fifteen names? Wildebeest Three Headed Unicorn? What is that?” The bar patrons he’s talking to titter with laughter, because they clearly agree – those other craft beers are SO PRETENTIOUS, but not you, Wedgehead – you’re our cool pal! I’ve posted all the videos I can find below (sorry) so you can check them out for yourself. And if you happen to be wandering around the streets of Toronto, look out for the talking Shock Top billboard – god help you. I guess the good news here is that the Big Boys will always show their true colors; their attempt to come off as totally non-corporate couldn’t feel MORE corporate. Hopefully that’ll stop some folks from confusing this pretender for an honest-to-goodness craft brewery. 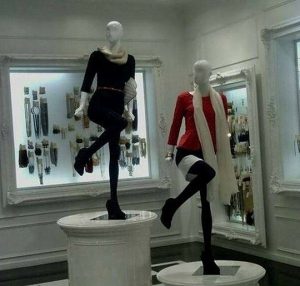 What are these mannequins doing?

Posted June 26, 2014 by David Eisenberg Oregon’s affinity for local craft beer has reached an unprecedented high, as more than 18 percent of all beer consumed in the state last year was locally produced, according to the Oregon Brewers Guild. Of the 1.4 million barrels the state’s breweries produced last year—an uptick of 8 percent over the year prior—500,000 were sold to Oregonians, a new in-state sales record. After adding more than 200 jobs in 2013, the state’s brewing companies now directly employ more than 6,600 people, the Guild added. Additionally, retail sales of beer produced in the state totaled more than $400 million last year, according to the guild, as the industry at large contributed $2.83 billion to the state’s economy, while also employing “roughly 29,000 people directly and indirectly.” “We have the largest number of breweries per capita and also the highest percentage of dollars spent on craft beer in the U.S.,” Brian Butenschoen, executive director of the state’s brewer’s guild, said in a statement. “Hood River has a brewery for every 1,433 residents and Portland has more breweries than any other city in the world.” One of those Hood River breweries is Full Sail Brewing Co., which has been in business since 1987, years before the so-called craft beer revolution washed over the country. Andy Krakauer, the brewery’s new vice president of sales — who was hired earlier this month — and an Oregon native himself, attributes much of the local love of craft beer to a pervasive sense of pride for all things home-grown. “There’s a tremendous amount of pride in anything that’s Oregon-made, Oregon-brewed,” he said. “People try to support the products in-state in a number of industries.” Krakauer added, however, that the type of growth seen in the guild’s study could at some point level off due to increased market saturation, though he is hopeful that time isn’t near on the horizon. One of the biggest challenges now, he said, not only in his craft crazy state, but throughout the country, is figuring out how to stand out from the crowd, which seems to be getting bigger and bigger. “It’s just the thing that becomes tough for everybody. There’s a lot of rotation amongst brands out here,” he said. “Everyone’s working hard to set themselves up to be the craft of choice.” Jim Brady, Full Sail’s Pacific Northwest regional sales manager, who is also new with the company, having started in April, reiterated that idea, and said to be the craft brand of choice in not only a state as saturated as Oregon, but throughout the country, brewers need to adapt to the attitudes of the consumer. “The palate of the consumer has changed,” he said. “The beer consumer, they’re picking up more variety, more flavor, if you will, in their beer. That’s been fairly consistent, not just in Portland, not just Seattle, but throughout the country.” Though in Oregon, despite the challenge of keeping relevant in the rotation, the dedication to local has prevailed, as an estimated 53 percent of all draft beer consumed in the state last year was brewed in Oregon. Overall craft production grew 18 percent in the U.S., the guild added, and accounts for 7.8 percent of the total volume of beer brewed in the country. Ed. Comment: Population Oregon 3.9 million, population Saskatchewan 1.1 million. So to be on track with Oregon we should be producing 460,000 hl of beer, and creating 1900 jobs in SK.

One day at a busy airport, the passengers on a commercial airliner are seated, waiting for the crew to show up so they can get under way. The pilot and co-pilot finally appear in the rear of the plane, and begin walking up to the cockpit through the center aisle. Both appear to be blind. The pilot is using a white cane, bumping into passengers right and left as he stumbles down the aisle, and the co-pilot is using a guide dog. Both have their eyes covered with huge sunglasses. At first the passengers do not react; thinking that it must be some sort of practical joke. However, after a few minutes the engines start spooling up and the airplane starts moving down the runway. The passengers look at each other with some uneasiness, whispering among themselves and looking desperately to the stewardesses for reassurance. Then the airplane starts accelerating rapidly and people begin panicking. Some passengers are praying, and as the plane gets closer and closer to the end of the runway, the voices are becoming more and more hysterical. Finally, when the airplane has less than 20 feet of runway left, there is a sudden change in the pitch of the shouts as everyone screams at once, and at the very last moment the airplane lifts off and is airborne. Up in the cockpit, the co-pilot breathes a sigh of relief and turns to the Captain, "You know, one of these days the passengers aren't going to scream and we're gonna get killed!" Logged maintenance complaints by QANTAS pilots (P for problem) and the corrective action (S for solution) recorded by mechanics. P: Test flight OK, except autoland very rough. S: Autoland not installed on this aircraft. P: Something loose in cockpit. S: Something tightened in cockpit. P: Dead bugs on windshield. S: Live bugs on backorder. P: Evidence of leak on right main landing gear. S: Evidence removed. P: Number 3 engine missing. S: Engine found on right wing after brief search. P: Aircraft handles funny. S: Aircraft warned to straighten up, fly right, and be serious.

All hot specials are $15.95, except where noted, and include a serving of soup du jour, chopped, or Caesar salad.