Our premium wines for July are Wayne Gretzky Okanagan VQA Wines from BC: The red is a Cabernet Sauvignon/Syrah. The white is a Pinot Grigio. Both are $7.95 for a glass and $22.95 for a half litre
Our guest tap now offers the Mikkeller Super Galena Single Hop Series IPA from Denmark for $8.95 pint. Next up is the Cactus Tap Tequila Barrel Aged Cerveza from Prairie Sun Brewing in Saskatoon for $7.95 pint. Bushwakker’s own Summer Wheat Beer is now available. We also now have available Growler Cozy’s (insulated carrying bags) for your Stainless Steel or glass growler in bright orange with the Fafard Logo in gun-metal green.$12 plus tax.

July 12: Riders vs. Lions. The second home game of the regular season starts at 7:30 PM. Be sure to stop by the Bushwakker before, during or after the game for our Lion Burger & a Pint feature. “Devour” the competition’s namesake burger and enjoy any regular Bushwakker pint for only $15.95. July 14: Monday Night Jazz & Blues. Whiteboy Slim. Toronto Exclusive Magazine Music Awards best blues artist, best blues CD and best blues song. 8:00 PM. July 16: Wednesday Night Folk. The Stillhouse Poets. Great roots duo inspired by the music of the Mississippi Delta and the Appalachian mountains. 9:00 PM. July 21: Monday Night Jazz & Blues. The Ministry of Groove. Jazz/Funk from the 70’s and beyond! 8:00 PM. July 23: Wednesday Night Folk. Chad Kichukla & The Garage. Americana roots rock inspired by inspirations Springsteen and Earle. 9:00 PM. July 26: Riders vs. Argonauts. The big Saturday night game starts at 8:00 PM. Enjoy our Argonaut & a Pint feature before or after your visit to Mosaic Stadium. Go Riders go! July 28: Monday Night Jazz & Blues. Uptown Jazz. The “new & improved” band continues to lay it down in fine form. 8:00 PM. July 30: Wednesday Night Folk. The Upside of Maybe. Energetic roots/folk/pop/rock group from Stratford, Ontario on a summer Canadian tour. 9:00 PM.

The following link will take you to four stage presentations about craft beer as presented at TED talks.  They are all interesting but that by John Barley (yes, that’s his real name) is particularly relevant. He talks about his family history and its impact on his own entrepreneurship and the sense of family that unites craft brewers. Most members of the families of the founders of the Bushwakker, Bev and Elaine (nee Pickard) Robertson were and are involved in education or entrepreneurship or both. One significant exception; one grandfather was a country doctor. And if you haven’t heard about TED; that’s short for Technology, Entertainment and Design. Quoting from the website:-- John Barley is the co-founder and CEO of Solemn Oath Brewery in Naperville, Illinois, one of the fastest-growing breweries in the country. Solemn Oath focuses specifically on Belgian-inspired and barrel-aged beers. They offer no year-round brews, but each year the brewery moves swiftly through dozens and dozens of beers across a range of style in search of what is new. Barley tells the story of how his father received the sum of his parents’ inheritance from the rest of his siblings in order to send himself to college. To Barley, craft beer is a similar kind of inheritance, and part of a permanent revolution. In craft brewing, competitors act as siblings looking to collaborate, create, challenge and yes, compete with one another. Brewers revel in the competition involved with looking for the next great brew. For Barley, craft beer tells a story, it builds a culture. In the end it comes down to family. Craft beer is about the partners, the fathers, sons and employees who are there to compete in order to help educate, build and inspire each other. 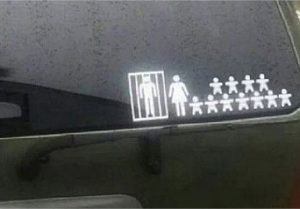 By Jiaxi Lu July 8, 2014 American consumers are starting to turn their back on light beers in favor of frou-frou drinks. This change in taste buds will send domestic light beers sales toward a 10-year low in 2015, according to a recent report by Shanken News Daily. Since its peak in 2008, domestic light beer sales have fallen by 8.3 million barrels in the United States, a decline of 8 percent, according to the Impact Databank. In fact, Americans have been drinking less beer overall. Americans’ per capita beer consumption has decreased 20 percent since the early 1990s, according to the Gallup survey in 2012. Craft beer taking over: Light beer distributors can blame craft beers and flavored alcohol drinks for the change in fortunes. While the overall beer market size is shrinking, craft beer is actually experiencing a huge growth in market share. In 2013, Technomic reported that craft beer production had increased 9.6 percent, while overall beer production dipped 1.4 percent. According to the U.S. Census Bureau, the number of breweries has more than doubled from 2007 to 2012. Young people, or millennials, are looking for the next new thing and share their experience on social media, according to Euromonitor International research. Craft beer has also managed to penetrate the local market, where people are increasingly interested in knowing where their food or drink come from and how they are made. “The innovative nature of these craft brewers has driven this market,” said Bart Watson, staff economist at the Brewers Association. “Every brewer in the market seems like they’re brewing something new that you’ve never heard of.” Danny Brager of the Nielsen Co. made a heady prediction in 2013 that craft beer will more than double its share of the existing shrinking beer market, from 7 percent to 15 percent, by 2020. “The future is so bright,” Brager said, “I don’t see any reason for less than double-digit growth any time soon.” Light beers slowly fading out The share of light beer in the U.S. beer market has fallen from 51.4 percent in 2012 to 50.3 percent in 2013, according to the Shanken News Daily reports. Large beer manufacturers, including Budweiser and Coors, are not giving up. They are jumping on consumers’ shift in taste by adding more flavors to their products. Coors Light came up with Coors Light Summer Brew this spring, which was infused with citrus flavors and was the brand’s first-ever seasonal extension. Bud Light launched its Lime-a-Rita product in 2012, and has so far generated more than $500 million in sales in two years. “I don’t see the era of big brands being over, but more that there’ll be a bigger mix of beers,” Lawrence Hutter, chief executive of Alvarez & Marsal Corporate Solutions, told Bloomberg. “Don’t forget people still like those lighter, lager-style beers; they’re very drinkable.” However, light beer’s taste and low calories may also contributed to its decline in market share. Another low-calorie alcoholic drink, Beam Suntory’s Skinnygirl line of diet wines and vodka dived 26 percent in 2013. Could diet alcoholic drinks be losing appeal? “People don’t drink alcohol for health and wellness reasons,” Spiros Malandrakis, a senior alcoholic drinks analyst with Euromonitor, told The Washington Post. “Sometimes with marketers, navel gazing can become so much of a problem that you forget about how people go out and drink.” Frou frou; showy, elaborately dressed. From the content of her article one might guess that Ms. Lu does not drink craft beer. 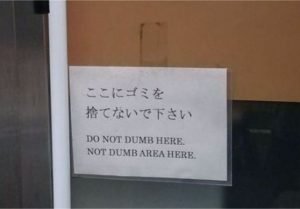 Perhaps they mean “No public washrooms.” or “No loitering.” Any more ideas?

Three convicts were on the way to prison. They were each allowed to take one item with them to help them occupy their time while incarcerated. On the bus, one turned to another and said, "So, what did you bring?" The second convict pulled out a box of paints and stated that he intended to paint anything he could. He wanted to become the "Grandma Moses of Jail." Then he asked the first, "What did you bring?" The first convict pulled out a deck of cards and grinned and said, "I brought cards. I can play poker, solitaire, gin, and any number of games." The third convict was sitting quietly aside, grinning to himself. The other two took notice and asked, "Why are you so smug?What did you bring?" The guy pulled out a box of tampons and smiled. He said, "I brought these." The other two were puzzled and asked, "What can you do with those?" He grinned and pointed to the box and said, "Well according to the box, I can go horseback riding, swimming, roller-skating...." When the store manager returned from lunch, he noticed his clerk's hand was bandaged, but before he could ask about the bandage, the clerk had some very good news for him. "Guess what, sir?" the clerk said. "I finally sold that terrible, ugly suit we've had so long!" "Do you mean that repulsive pink-and-blue double-breasted thing?!" the manager asked. "That's the one!" "That's great!" the manager cried, "I thought we'd never get rid of that monstrosity! That had to be the ugliest suit we've ever had! But tell me, why is your hand bandaged?" "Oh," the clerk replied, "after I sold the guy that suit, his seeing-eye dog bit me."

Soup & Sandwich Special is $11.95. All hot specials are $15.95, except where noted, and include a serving of soup du jour, chopped, or Caesar salad.