Our premium wines for July are Wayne Gretzky Okanagan VQA Wines from BC: The red is a Cabernet Sauvignon/Syrah. The white is a Pinot Grigio. Both are $7.95 for a glass and $22.95 for a half litre. Our guest tap now offers Paddock Wood's Belgian Wit from Saskatoon. $7.95 for a pint. Next up is the Mikkeller Super Galena single-hop IPA for $8.95 pint.

Sun., June 29: It's one of those rare Sundays when the Bushwakker will be open! The Hamilton Tiger Cats are in town for the Rider's first game of the regular season. We suspect they would love a win over Team Green following the 2013 Grey Cup contest. Kickoff is at 5:00 PM and we open at noon. Enjoy our Tabby Burger and a Pint feature. Think of it as "devouring" the competition! June 30: Monday Night Jazz & Blues. Uptown Jazz. Great jazz standards from this revitalized group. 8:00 PM. July 1: Closed. Happy Canada Day! July 2: Wednesday Night Folk. Becky & The Jets. Classic folk tunes and great harmonies for this popular group. 9:00 PM. July 4: First Firkin Friday. A great Bushwakker monthly tradition! Enjoy the pomp and circumstance as a small keg (firkin) is lead in a procession throughout the pub headed by a piper from The Fraser Pipe Band. An unsuspecting volunteer wields a handmade wooden maul and taps the firkin on the bar in the centre of the room. A drenching of the keg tapper as well as all those in the immediate proximity is almost guaranteed. Don’t miss the special brew that Bushwakker head brewer, Mitch Dalrymple has prepared for you this month. 5:30 PM. July 7: Monday Night Jazz & Blues. The Jazz Band-Its. Over 20 members comprise this very big band which plays big band jazz. 8:00 PM. July 9: Wednesday Night Folk. The Rusty Augers. Great country rock  from this popular Moose Jaw act. 9:00 PM. July 12: Riders vs. Lions. The second home game of the regular season starts at 7:30 PM. Be sure to stop by the Bushwakker before, during or after the game for our Lion Burger & a Pint feature. “Devour” the competition’s namesake burger and enjoy any regular Bushwakker pint for only $15.95. July 14: Monday Night Jazz & Blues. Whiteboy Slim. Toronto Exclusive Magazine Music Awards best blues artist, best blues CD and best blues song. 8:00 PM. July 16: Wednesday Night Folk. The Stillhouse Poets. Great roots duo inspired by the music of the Mississippi Delta and the Appalachian mountains. 9:00 PM. July 21: Monday Night Jazz & Blues. The Ministry of Groove. Jazz/Funk from the 70’s and beyond! 8:00 PM. July 23: Wednesday Night Folk. Chad Kichukla & The Garage. Americana roots rock inspired by inspirations Springsteen and Earle. 9:00 PM. July 26: Riders vs. Argonauts. The big Saturday night game starts at 8:00 PM. Enjoy our Argonaut & a Pint feature before or after your visit to Mosaic Stadium. Go Riders go! July 28: Monday Night Jazz & Blues. Uptown Jazz. The “new & improved” band continues to lay it down in fine form. 8:00 PM. July 30: Wednesday Night Folk. The Upside of Maybe. Energetic roots/folk/pop/rock group from Stratford, Ontario on a summer Canadian tour. 9:00 PM.

I spent my childhood and young adulthood on the farm, with an interlude in 2 small Saskatchewan towns. There are wonderful memories from both, but the farm years were by far the best. There the great outdoors became my canvas. Nothing matches the freedom of walking the soft dips and rises of the fields, pasture and woodland. I treasured the small secret ponds and mysterious trails. My life seemed to stand still as the four seasons shared their gifts with me – year after year. Both my parents had artistic discerning eyes. My mother still paints and creates anything she puts her mind to including mosaics and glass works. She is still an award-winning gardener – also making art cards from the pictures of her beloved flowers. My father was never without his camera, whether on the tractor, car; beach or on his beloved country roads. He recorded the changing seasons on his land, sunrises and sunsets – water, earth and sky.. I often feel that I look at the world though my parents eyes. The buffalo may have traversed over our patch of farmland in years past and I have long felt a connection to them. Perhaps my childhood footsteps over the farm crisscrossed their trails from times long past. Today, our children are grown, my nursing career is complete and the lovely days of retirement are filled with contemplation and enjoyment of Mother Earth and best of all – recording some of those moments with a paintbrush! 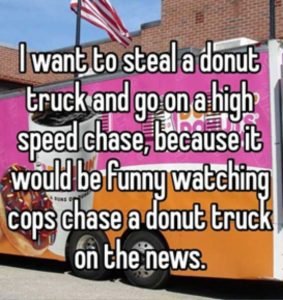 Brewers Have Been All Bottled Up, But Now They're Canning It

by Lewis Wallace June 10, 2014 You may have noticed a trend clinking around on the shelves of your local liquor store: More and more craft beer is showing up in aluminum cans. For decades, canned beer was the stuff you bought cheap — the PBR or Natural Ice — bottom-shelf beer. But that layout has changed: The number of craft breweries putting their beer in cans has more than doubled since 2012, according to Russ Phillips, author of about the art gracing those craft beer cans and manager of the website . He says five years ago, just a few dozen craft brewers in the U.S. were canning, while today there are more than 500. It seems the association of canned beer with cheap, watery stuff has been gradually washing away. Can advocates and brewers who are choosing cans say there are clear advantages over bottles: The beer in a can cools faster. The can protects from beer-degrading light. Beer cans are portable and take up less space, advantages both for retailers and for consumers who want to take them camping, hiking or fishing. (See our 2009 piece on Alaska's .) There's also more space on a can for wraparound design and decoration. But there were reasons for the popularity of glass in the first place: While glass bottles take longer to cool down, they also stay cold longer once they come out of the cooler. Plus, and will tell you translucent amber glass has been working fine to protect beer from light and air. The biggest selling point for the bottle, though, is flavor. There's at least a perception that cans impart a metallic taste, whereas liquid stored in a bottle comes out tasting pure. "That perception is just kind of dated," says Katie Alsip, the marketer for , a one-year-old craft brewery in Cincinnati. Most aluminum cans these days are lined with a polymer coating that protects the beer from the metal. (, is a source of health concerns for some, although scientists have found nothing associated with it.) The metal touching your lips is still a factor in terms of flavor, but most craft brewers suggest pouring out beer into a glass before sipping, whatever package it comes in. Rhinegeist co-founder Bob Bonder says the company surveyed retailers, other breweries and potential customers about cans before deciding to go all aluminum. Cans were the hands-down winner. They're "lighter, more portable, easier to bring anywhere, cheaper to ship," he says. And Rhinegeist's sleek, bright design makes it stand out on the shelves. "I think there's a cool factor to it," says , as associate global beverage buyer with Whole Foods. The newfound hipster popularity of old PBR may have given canned craft a boost, and some of it, he says, is just personal preference. "Folks just like it." It may be coolness, or it may be convenience, but the bottom line is, cans are getting cheaper. While it has become somewhat less expensive to buy your own canning line, the startup costs are still prohibitive for a lot of small brewers. Bottling in-house remains a simpler, cheaper process. Brewers like Rhinegeist say the savings on canning comes later — in the form of less expensive materials. The canning trend is still concentrated in smaller, newer breweries like Rhinegeist or Cincinnati's . The estimates just 3 percent of craft beer on the shelves is in a can. Sixty percent still goes out in bottles, and the rest is sold in kegs. "Glass has been a very reliable package and tradition will prove itself well that glass is not going anywhere," says Julia Herz with the association. Even as more established brewers start offering some canned products, Herz doesn't see bottles going out anytime soon. "There are a lot of occasions where cans are preferable," says Larry Bell, owner and founder of Michigan-based Bell's which is now offering 16-ounce cans of its signature Two Hearted Ale and Oberon, both popular summer beers. But he says there's no chance Bell's will shift to cans entirely. "We love bottles as a package; we are dedicated to bottling ... we'll continue to do both." Ed. Note: To be added to the advantages of cans over bottles, full or empty, is the lower use of energy used for shipping, and the lower weight which might become more important for beer that needs carried on ones back or in a canoe or light plane to a fishing vacation. We recycle both cans and bottles in Canada, but in the U. S. bottle recycling is rare. Against cans is the argument  that aluminum mining and refining is energy intensive, but overall, we think that the environmental case for cans is much stronger. In terms of taste, we recommend pouring the contents into a glass, not only for the convenience, but the act of pouring actually improves flavour by starting an oxidation process. However, the positive aspects of oxidation don’t last long and fully oxidized beer tastes like it was used to soak cardboard. There is no reason to expect a flavour advantage for bottled beer. Your Bushwakker is considering the switch to cans. If and when we do, we intend to offer blind tasting sessions in which fresh beer, beer aged a few weeks in cans and beer aged a few weeks in bottles will be offered. 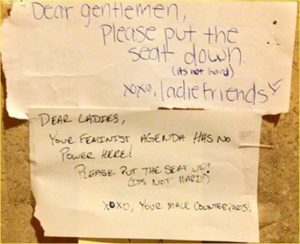 A man and his wife check into a hotel. The husband wants to have a drink at the bar, but his wife is extremely tired so she decides to go on up to their room to rest. She lies down on the bed... just then, and elevated train passes by very close to the window and shakes the room so hard she's thrown out of the bed. Thinking this must be a freak occurrence, she lies down once more. Again a train shakes the room so violently, she's pitched to the floor. Exasperated, she calls the front desk, asks for the manager. The manager says he'll be right up. The manager is skeptical but the wife insists the story is true. "Look... lie here on the bed -- you'll be thrown right to the floor!" So he lies down next to the wife. Just then the husband walks in. "What," he says, "are you doing here!?!" The manager calmly replies, "Would you believe I'm waiting for a train?"