Our premium wines for June are from California. The red is Purple Cowboy Tenacious Red, a Cabernet/Syrah blend. The white is Menage A Trois, a Chardonnay/Muscat Alexandria/Chenin Blanc blend. Both are $8.50 glass and $24.95 half litre. Our guest tap now offers St. Ambroise Apricot Wheat from the McAuslan Brewery in Montreal. $7.95 for a pint. Next up is the Paddock Wood Belgian Wit for $7.95 pint.

Half of the growlers that we ordered were sold in the first weekend that we offered them. Of course that’s a success, but we are aware of a number of problems and we want to let you know that we are working on them. We sent out our first order for Stainless Steel growlers after learning everything we could about potential problems that might occur with growlers when we attended the American Craft Brewers Conference in Denver in early April. We visited dozens of booths selling growlers of every size and shape. We were concerned about both dealing with foam and knowing when a stainless steel growler was full. We were assured repeatedly that that would not be a problem, but that was not true. Both are a problem. We will take a number of steps.

Fri., June 20: The Riders are looking for their second pre-season win against the visiting Edmonton Eskimos. Game time is 7:00 PM. Should be a very busy Friday happy hour. Enjoy our Eskimo Burger & a Pint feature before, during or after the game. June 23: Monday Night Jazz & Blues. ‘round Midnight. Popular jazz and adult contemporary tunes. 8:00 PM. June 23: The Great Whisky Debate. The Scots have long claimed they are masters of the dram but the innovative Canadian distillers are ready to contend for the whisky crown. Both countries produce delicious spirits and we want to find out who is best. Witness two representatives from the top whisky producing countries on the planet go head to head in a good old fashioned debate. Canadian Whisky Ambassador Dan Tullio (featuring Canadian Club Small Batch 12, Alberta Premium Dark Horse, and Canadian Club Sherry Cask) will square off against Scotch Whisky Ambassador Dan Volway (featuring the new Macallan 1824 Series - Gold, Amber, and Sienna) in a Great Whisky Debate. Listen to the presentations, see the colours, learn about the history, taste the spirit and feel the intensity. Come join the fun as these two international ambassadors fight for whisky supremacy but you ultimately decide the winner! Only 50 tickets will be made available. $30 each. Six samples included – of course! 7:00 PM. June 25: Wednesday Night Folk. The Wrong Omar. Minneapolis based singer/songwriter plays a warm blend of roots/folk/rock with jazz harp and a little quirk. 9:00 PM. Sun., June 29: It's one of those rare Sundays when the Bushwakker will be open! The Hamilton Tiger Cats are in town for the Rider's first game of the regular season. We suspect they would love a win over Team Green following the 2013 Grey Cup contest. Kick off is at 5:00 PM and we open at noon. Enjoy our Tabby Burger and a Pint feature. Think of it as "devouring" the competition! June 30: Monday Night Jazz & Blues. Uptown Jazz. Great jazz standards from this revitalized group. 8:00 PM. 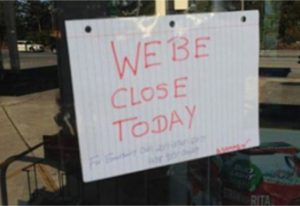 Quackmail: Why You Shouldn't Fall For The Internet's Newest Fool, The Food Babe.

She made the front page of the Financial Times as the blogger who humbled Big Food and whose latest campaign for transparency in beer ingredients left “The King of Beers,” Anheuser Busch InBev, and close running rival SabMiller clamoring like Neville Chamberlain to appease a bully. “The rapid response by AB InBev and SABMiller—which capitulated to Ms Hari’s demands within 36 hours—underscores the growing power of social media over corporate policy,” wrote the FT’s Consumer Industries Editor, Scheherazade Daneshkhu. Ironically, one of the key factoids in blogger Vani Hari—aka, “The Food Babe’s”—attack on Big Beer was that they “even use fish swim bladders” to make their product without putting this self-evidently dodgy fact on the label; the implication is that beer should not from fish bladder be made. Yet, isinglass—as dried fish bladder is Tolkienesquely called—has been used to clarify beer, wine and liquor since the early 18th century, and its manufacture was widespread in Colonial America (a versatile compound, it was also mixed with gin and used as a glue to repair broken china). While this may cause vegans to pause before a draught, isinglass has been used and consumed without incident for centuries. Unfortunately, this kind of clarification, where a blogger takes something commonplace and gives it a nefarious social media friendly twist to advance an agenda, did not make the Financial Times, Business Insider, USA Today, NBC News, and undoubtedly many more news stories that uncritically reported the Food Babe’s victory. Fortunately, there are real experts on the Internet, and they are not pulling any punches. The Food Babe “is the Jenny McCarthy of the food industry,” writes “beer snob” and cancer surgeon David Gorski on Science-Based Medicine. “Of course,” he adds, “I don’t mean that as a compliment.” As Gorski notes, Hari’s strategy is to “name a bunch of chemicals and count on the chemical illiteracy of your audience to result in fear at hearing their very names.” Anti-freeze in beer? Propylene glycol has many uses, but the reason it’s used in de-icing solutions is that it lowers the freezing temperature of water. That’s it. There are no concerns about toxicity because you’d have to consume huge quantities of it very quickly to have any effect. More to the point writes Gorski, it’s not, as Derek Zoolander might think, in the beer, it’s in the cooling system for the beer; it just appears that propylene glycol is an ingredient because the law requires listing every production process. That the media should give The Food Babe a free pass as an expert or as a credible consumer watchdog is especially troubling when you look at some of her other claims, as recorded by the doctors at Science-Based Medicine. As infectious disease specialist Mark Crislip MD noted, Hari out goops Gwyneth Paltrow on the feelings of water by claiming that if you expose water to the words “Hitler” and “Satan” it will change its physical structure in exactly the same way as if you microwaved it. She believes getting the flu shot will give you cancer from all the “chemicals.” She is, naturally, against GMOs. As Gorski notes, “companies live and die by public perception. It’s far easier to give a blackmailer like Hari what she wants than to try to resist or to counter her propaganda by educating the public. And, make no mistake, blackmail is exactly what Vani Hari is about.” Actually, a better word would be “quackmail.” So when are journalists going to hold truth up to this new self-promoting social media juggernaut? Why have so many news stories avoided questioning her claims as they would question her targets in the food industry? Surely, someone who believes that saying “Satan,” repeatedly, to a glass of water will alter the water’s physical properties needs to be treated with a dash of skepticism—no?

A lady is golfing with some friends. After sinking her first putt, she's on her way down the path to the second tee when she gets stung by a bee. She rushes the short distance back to the clubhouse, hoping to find a doctor. She bumps into the resident golf pro, who says "What can I help you with?" The woman tells him she's been stung by a bee. The pro asks, "Oh really, where?" The lady replies, "Between the first and second hole." To that the golf pro states, "Well, first of all, your stance to way too wide!" The husband didn't want to play in the "Couples Alternate Shot Tournament" at the club, but he reluctantly agreed just for the sake of martial harmony. He got the first shot. He teed off, a par four, and fired a drive 300 yard down the middle of the fairway. When they reached the ball, he said to his wife (a novice golfer), "Just hit it towards the green, hon, anywhere around there will be fine." She proceeded to knock the ball deep into the woods. Undaunted, he said, "That's ok, dear, we'll play it." He spent five full minutes looking for the ball. He played it for the shot of his life and actually put the ball just two feet from the hole on the green. Arriving on the green he said, "Now, dear, all you have to do is knock it gently into the hole." She whacked it a good one, right off the green and into a sand trap. The husband, still retaining his composure, marched into the sand trap, summoned all of his skill, and amazingly holed the shot from there. Retrieving the ball from the hole he put his arm around his wife and calmly said, "Honey, that was a bogey -- one over par -- but that's ok. I think we can do better on the next hole." She snapped back at him, "Don't bitch at ME. Only two of those five shots were mine!" Golfer: Do you think I can get there with a 5 iron? Caddy: Eventually! Golfer: You've got to be the worst caddy in the world! Caddy: I don't think so. That would be too much of a coincidence! 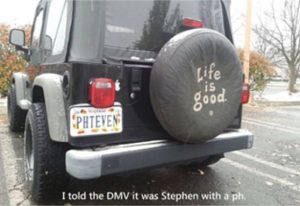