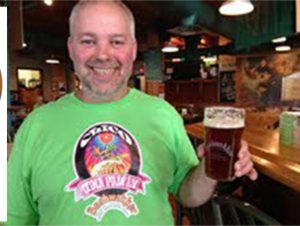 Bushwakker’s Regina Pale Ale just took gold in the English Pale Ale category at the Canadian Brewing Awards. Congratulations to head brewer Mitch and all of the brewery staff. (Mitch is wearing one of our new Chico IPA T-shirts; $30 each.) 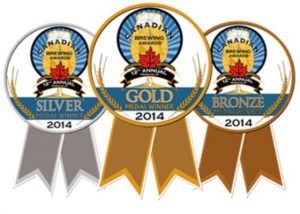 The Bushwakker now offers growlers just in time for Father’s Day! Our Stainless Steel, two-liter, flip-top growlers will be available on Friday, June 13 at 4:00 PM. They make a unique Father’s Day gift. Buy the growler for $40 (plus taxes). Refill it as many times as you wish with any fresh beer of your choice for $15. Our premium wines for June are from California. The red is Purple Cowboy Tenacious Red, a Cabernet/Syrah blend. The white is Menage A Trois, a Chardonnay/Muscat Alexandria/Chenin Blanc blend. Both are $8.50 glass and $24.95 half litre. Our guest tap now offers St. Ambroise Apricot Wheat from the McAuslan Brewery in Montreal. $7.95 for a pint. Next up is the Paddock Wood Belgian Wit for $7.95 pint.

June 16: Monday Night Jazz&Blues. Shane & Ethan Reoch. Regina’s friendliest bluesman is now joined by his talented son. 8:00 PM. June 18: Wednesday Night Folk. Tara Dawn Solheim. Eclectic a cappella blues pop from this unique artist. 9:00 PM. June 20: The Riders are looking for their second pre-season win against the visiting Edmonton Eskimos. Game time is 7:00 PM. Should be a very busy Friday happy hour. Enjoy our Eskimo Burger & a Pint feature before, during or after the game. June 23: Monday Night Jazz & Blues. ‘round Midnight. Popular jazz and adult contemporary tunes. 8:00 PM. June 23: The Great Whisky Debate. The Scots have long claimed they are masters of the dram but the innovative Canadian distillers are ready to contend for the whisky crown. Both countries produce delicious spirits and we want to find out who is best.  Witness two representatives from the top whisky producing countries on the planet go head to head in a good old fashioned debate.  Canadian Whisky Ambassador Dan Tullio (featuring Canadian Club Small Batch 12, Alberta Premium Dark Horse, and Canadian Club Sherry Cask) will square off against Scotch Whisky Ambassador Dan Volway (featuring the new Macallan 1824 Series - Gold, Amber, and Sienna) in a Great Whisky Debate.  Listen to the presentations, see the colours, learn about the history, taste the spirit and feel the intensity.  Come join the fun as these two international ambassadors fight for whisky supremacy but you ultimately decide the winner! Only 50 tickets will be made available. $30 each. Six samples included – of course! 7:00 PM. June  25: Wednesday Night Folk. The Wrong Omar. Minneapolis based singer/songwriter plays a warm blend of roots/folk/rock with jazz harp and a little quirk. 9:00 PM. June 29: It's one of those rare Sundays when the Bushwakker will be open! The Hamilton Tiger Cats are in town for the Rider's first game of the regular season. We suspect they would love a win over Team Green following the 2013 Grey Cup contest. Kick off is at 5:00 PM and we open at noon. Enjoy our Tabby Burger and a Pint feature. Think of it as "devouring" the competition! June 30: Monday Night Jazz & Blues. Uptown Jazz. Great jazz standards from this revitalized group. 8:00 PM.

Our artist’s wall for June is a team effort. Statements from the three artists follow. Trina Wirth;   t.wirth@accesscomm.ca  I was born and raised in Regina.  I am the middle child of seven. I have enjoyed art from a young age. I have done many crafts over the years such as pottery, paper tole, folk art, sewing and ceramics. In later years I started taking painting classes from local artists. I have worked with water colors, acrylics, mixed medium and oils. I recently joined the Aurora Art Guild to further my knowledge and participation in art. Shiela Mitchell;  shiela.mitchell@gmail.com Upon retirement in 2003, after raising a family of four, teaching for 19 years in several Saskatchewan communities, one of my goals was to take an Art class. I had gained an interest in art while having to wear an Art Teacher hat during more than one school year.  We all know that in rural Saskatchewan schools, teachers often become involved in many subject areas outside their comfort zone. This can be a good thing. I have taken some workshops and varied classes from the LLLC from inspiring professionals who have made ART their life work. Presently, I continue to paint on a regular basis with friends to share ideas, laugh and create what moves me. I have a wide and varied interest in subject matter from landscape, still life and the use of photos for inspiration. I began painting with watercolor and now work with acrylics. I love this journey of self-exploration, expression and personal growth Linda Tidball; regsask@gmail.com I was born in Regina and continue to live in the city. I have always been interested in creating and have done many crafts over the years. After retiring from a career as a medical laboratory technologist I began cultivating an interest in art. I have taken classes in acrylics, mixed media, oils, pastels, watercolor and encaustic wax all taught by local artists as well as participating in workshops lead by visiting artists. My focus has been on still life and landscapes. My husband and I enjoy taking photographs which are inspirations for my paintings. I am currently a member of the Aurora Art Guild and enjoy working and painting with fellow artists. 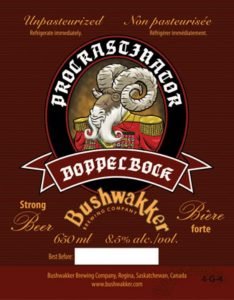 The Bushwakker brewery releases three bocks every year. The Procrastinator Doppelbock has the biggest and most complex flavour profile of them all. The new label is designed by local artist, Gavin de Lint. To see more of Gavin’s work visit www.gavin.delint.ca. (A bock is both a beer style and a male goat.)

Bill and Moe had started with only five hundred dollars between them, but they had built up a computer business with sales in the millions. Their company employed over two hundred people, and the two executives lived like princes. Almost overnight, things changed. Sales dropped sharply, former customers disappeared, the business failed, and personal debts forced both into bankruptcy. Bill and Moe blamed each other for the troubles, and they parted on unfriendly terms. Five years later, Bill drove up to a decrepit diner and stopped for a cup of coffee. As he was discreetly wiping some crumbs from the table, a waiter approached. Bill looked up and gasped. "Moe!" he said, shaking his head. "It's a terrible thing, seeing you working in a place as bad as this." "Yeah," Moe said with a smirk. "But at least I don't eat here." A woman went to the doctor's office, where she was seen by a young, new doctor. After about 4 minutes in the examination room, the doctor told her she was pregnant. She burst out, screaming as she ran down the hall. An older doctor stopped her and asked what the problem was, and she told him her story. After listening, he had her sit down and relax in another room. The doctor marched down the hallway to the back where the first doctor was and demanded, "What's the matter with you? Mrs. Terry is 59 years old, she has four grown children and seven grandchildren, and you told her she was pregnant?" The new doctor continued to write on his clipboard and without looking up said: "Does she still have the hiccups?" 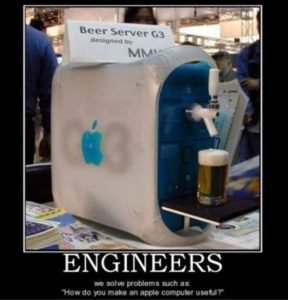