Bushwakker’s Regina Pale Ale just took gold in the English Pale Ale category at the Canadian Brewing Awards. Congratulations to head brewer Mitch and all of the brewery staff. Our premium wines for June are from California. The red is Purple Cowboy Tenacious Red, a Cabernet/Syrah blend. The white is Menage A Trois, a Chardonnay/Muscat Alexandria/Chenin Blanc blend. Both are $8.50/glass and $24.95/half litre. Our guest tap now offers Shawinigan Handshake Weizenbock for $8.95. Next up is St. Ambroise Apricot Wheat from the McAuslan Brewery in Montreal: $7.95 for a pint.

June 6: First Firkin Friday. Bushwakker head brewer, Mitch Dalrymple, has been quite creative with his firkins as of late. Last month’s black spiced rum and coconut milk infused Palliser Porter raised a few eyebrows. Don’t miss this month’s offering complete with plenty of pomp and circumstance as a small keg of specialty suds is lead throughout the pub lead by a piper from The Fraser Pipe Band. The keg will be tapped by a special guest firkin tapper who just may soak all the nearby onlookers with plenty of fresh beer. Get set to get wet at 5:30 PM. June 9: Monday Night Jazz & Blues. Call Me Mildy. Talented acoustic blues trio. 8:00 PM. June 11: Wednesday Night Folk. Jake Van Gold Trio. Blues/jazz/funk/rock in Hendrix/Clapton/Stevie Ray Vaughan guitar style. 9:00PM. June 12: JazzFest Regina 2014 presents Belle Plaine & Her Seven Piece Band at The Bushwakker. The 6th annual Regina Jazz Festival is growing bigger and better every year. The Bushwakker will once again be a part of the festival and will present Saskatchewan born and raised jazz/pop/folk artist, Belle Plaine who will be backed by her seven piece band. Belle Plaine is a true prairie girl possessing a voice that silences noisy taverns. She has been called a national treasure with the voice of an angel. She is described as sounding timeless, somehow equally sultry, seductive, fragile, and dusky while still capable of a room-filling bombast when the moment calls for it. Belle Plaine is a throwback to a better time, from her singing style to her stage performance. She is engaging, talented, professional (not to mention gorgeous) - and has the singing chops to back it all up. Rush seating tickets are $15 and available at the Bushwakker, Bach & Beyond and RJS members. Show starts at 7:00 PM. Plan to arrive early in order to get a good seat! June 16: Monday Night Jazz & Blues. Shane & Ethan Reoch. Regina’s friendliest bluesman is now joined by his talented son. 8:00 PM. June 18: Wednesday Night Folk. Tara Dawn Solheim. Eclectic a cappella blues pop from this unique artist. 9:00 PM. June 23: Monday Night Jazz & Blues. ‘round Midnight. Popular jazz and adult contemporary tunes. 8:00 PM. June 23: The Great Whisky Debate. The Scots have long claimed they are masters of the dram but the innovative Canadian distillers are ready to contend for the whisky crown. Both countries produce delicious spirits and we want to find out who is best. Witness two representatives from the top whisky producing countries on the planet go head to head in a good old fashioned debate. Canadian Whisky Ambassador Dan Tullio (featuring Canadian Club Small Batch 12, Alberta Premium Dark Horse, and Canadian Club Sherry Cask) will square off against Scotch Whisky Ambassador Dan Volway (featuring the new Macallan 1824 Series - Gold, Amber, and Sienna) in a Great Whisky Debate. Listen to the presentations, see the colours, learn about the history, taste the spirit and feel the intensity. Come join the fun as these two international ambassadors fight for whisky supremacy but you ultimately decide the winner! Only 50 tickets will be made available. $30 each. Six samples included – of course! 7:00 PM. June 25: Wednesday Night Folk. The Wrong Omar. Minneapolis based singer/songwriter plays a warm blend of roots/folk/rock with jazz harp and a little quirk. 9:00 PM. June 30: Monday Night Jazz & Blues. Uptown Jazz. Great jazz standards from this revitalized group. 8:00 PM. 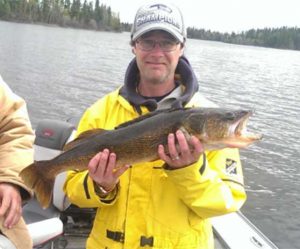 Executive Chef Mike Monette displays his 79 cm. Walleye, caught on the south side of the narrows of Simonhouse Lake, near Cranberry Portage, MB. (For the “unit” challenged, that’s 31 in.) All Walleye over 55 cm. must be released. Those who land Walleye 71 cm. or over qualify for the Master Angler designation. Mike and his son Steven, who landed a 73 cm. Walleye himself, were part of the annual Bushwakker Fishing Trip. The Bushwakker Fishing Trip is part of a tradition with at least a half century of history. It started with a group of Roughrider team members who had families here in Regina, including Al Ford and Garry Brandt. They joined many other Reginans who went fishing on Jan Lake, just west of Flin Flon in Saskatchewan, every Victoria Day weekend. One Brandt family member, Alf Moore, not a football player, was the foreman of trades at the University of Regina. He was also part of a group that took a 7:30 AM coffee break in the Lab building cafeteria every weekday morning. That group included Bushwakker founder, Bev Robertson, and other academics. The Roughrider fishing group gradually became a University of Regina fishing group. And when Robertson left the University, it gradually became a Bushwakker fishing group. Other changes over the years are that the group starts fishing on the weekend after the Victoria Day duffers have gone home and when the chance of being stymied by water in its solid state are lower, and they stay for the week not just a weekend. And secondly, they fish in up to eight lakes around Cranberry Portage, for Walleye, Pike, Rainbow Trout and Lake Trout. 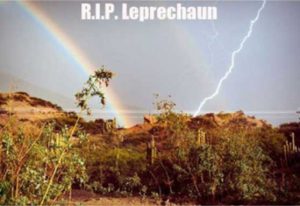 One morning three women are golfing on the fourth green when suddenly a guy runs by wearing nothing but a bag over his head. As he passes by the first woman, she looks down and says, Well, he’s certainly not my husband. As he passes by the second woman, she also glances downward and says, He’s not my husband either. He then passes by the third woman Audrey, who also looks down as he runs by her, wait a minute, Audrey says. “He’s not even a member of this golf club". When Albert Einstein was making the rounds of the speaker's circuit, he usually found himself eagerly longing to get back to his laboratory work. One night as they were driving to yet another dinner, Einstein mentioned to his chauffeur (a man who somewhat resembled Einstein in looks & manner) that he was tired of speechmaking. "I have an idea, boss," his chauffeur said. "I've heard you give this speech so many times, I'll bet I could give it for you." Einstein laughed loudly and said, "Why not? Let's do it!" When they arrived at the dinner, Einstein donned the chauffeur's cap and jacket and sat in the back of the room. The chauffeur gave a beautiful rendition of Einstein's speech and even answered a few questions expertly. Then a supremely pompous professor asked an extremely esoteric question about antimatter formation, digressing here and there to let everyone in the audience know that he was nobody's fool. Without missing a beat, the chauffeur fixed the professor with a steely stare and said, "Sir, the answer to that question is so simple that I will let my chauffeur, who is sitting in the back, answer it for me." A lonely frog telephoned the Psychic Hotline and asked what his future holds. His Personal Psychic Advisor tells him: "You are going to meet a beautiful young girl who will want to know everything about you." The frog is thrilled, "This is great! "Will I meet her at a party?" he croaks. "No," says the psychic, "in biology class."

Movie stars Brad Pitt and Matthew McConaughey provided NOLA (New Orleans Lager & Ale) Brewing some welcome free advertising last month when paparazzi captured Pitt tossing a can of Hopitoulas IPA from his New Orleans French Quarter balcony to McConaughey on a balcony across the street. "Everyone on Facebook and Twitter has been excited that the idea of grabbing a craft beer instead of traditional American lager has finally trickled up to the Hollywood A-listers," NOLA founder Kirk Coco said. "It says something about how craft beer is starting to become the norm. I think it will become more and more commonplace to see celebrities drinking craft beers." And that one would contain IPA. Garrett Oliver, brewmaster of The Brooklyn Brewery, has won the 2014 James Beard Foundation Award for Excellence in the category of "Outstanding Wine, Beer, or Spirits Professional." This is the first time a beer professional has won the award since the James Beard Awards were established in 1990. "This is my 20th year at Brooklyn Brewery, and I couldn’t think of a better way to celebrate a banner year," Oliver said. "Chefs are the closest peers of the modern craft brewer, so the culinary side of brewing has always been very important to me. I have a lot of friends in this room. This is a great honor, and I think it signals the fact that real beer is back where it belongs – at the table." Oliver began brewing professionally at Manhattan Brewing Company in 1989, and then went to work at Brooklyn Brewery in 1994. His first book, “Brewmaster’s Table: Discovering the Pleasures of Real Beer with Real Food,” won the 2004 International Association of Culinary Professionals (IACP) Book Award and was a finalist for the 2004 James Beard Foundation Book Awards.